HOME / WORLD / Will the Armed Forces of Ukraine see North Korean commandos on the battlefield? 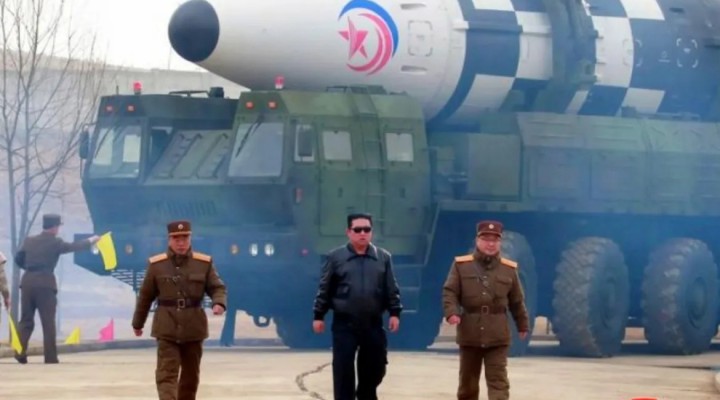 Dmitry Rodionov– North Korea recognized the independence of the DNR and LNR. This was reported at the embassy of the DPRK in Moscow. In response, Kyiv announced that it was breaking off diplomatic relations with the DPRK and ending economic and political contacts. According to President Volodymyr Zelensky , Ukraine will react harshly to North Korea’s recognition of the Donetsk and Luhansk People’s Republics.

“Today, representatives of the occupation structures in Donetsk stated that, as they say, they were recognized by the DPRK. We will react harshly at all levels, but this is such news that it does not require additional comments, everything is obvious, ”Zelensky said in his video message.

Well, Kyiv’s reaction is hardly surprising. As well as the reaction of the West, which has long lacked any levers of pressure on Pyongyang. However, North Korea’s act is impressive in itself. Nobody expected this from the country.

– Yes, the news is somewhat unexpected, – says the director of the Center for Public and Information Cooperation “Europe” Eduard Popov .

Although, of course, it has its own logic. Two countries – big Russia and little North Korea – have become official pariahs of the Western world. North Korea has such a strong spirit that it has been opposed to the American empire for many years. Therefore, this step is natural. But why now? You can make different assumptions.

“SP”: – What will it give the republics of Donbass? How can North Korea help them? Belarus, which does not recognize the republic, even has more economic ties with them …

– I think the question should be put differently: what will the recognition of the DPR-LPR give to both sides? I’ll make a somewhat exotic suggestion – or suggestion. The Russian side does not have enough fighters. Attracting unprepared conscripts is fraught. Why not offer to participate in a military operation against a common enemy, the West, our neighbor and comrade in misfortune – North Korea? The DPRK has an excellent trained army.

The armed forces of the DPRK are the only ones in the world where there is a corps (90,000 soldiers) of special forces. Why not try to negotiate with Pyongyang on military cooperation? They give us their excellent motivated and well-trained fighters for a while, we give them new military equipment, free places in military schools and various other privileges and gifts. Why do Ukrainians recruit mercenaries all over the world, including the BRICS countries, which seem to be our allies. Can’t we create similar allied units from the fighters of states friendly to us? North Korean fighters under the banner of the armies of the DPR-LPR or even Russia could enter Western Ukraine and tightly block the transit of Western military cargo, the flow of mercenaries and the transport of fuel. I know it sounds a little exotic. Didn’t a special military operation seem exotic a year ago?

In any case, if there is something more than just political PR behind the recognition, then there is a whole range of interests for the DPRK.

“SP”: – Will this set an example for any other countries? The same Belarus, maybe?

– Yes, it will. It would be time for the Armed Forces of Belarus to also join the special military operation. Whether Minsk wants it or not, Belarus will be drawn into the conflict in the former Ukraine. So isn’t it better to start first?

– This news, frankly, did not become a sensation, – says Pavel Feldman, deputy director of the Institute for Strategic Studies and Forecasts of the Peoples ‘ Friendship University of Russia .

Rather, it is surprising that North Korea has not done this before. On the other hand, Syria also recognized the LPR and DPR only at the end of June this year. From the very beginning it was clear that among the first such decisions would be made by countries declared by the West to be pariahs. They have nothing to lose in relations with the EU and the US, so they can afford such a luxury, unlike Venezuela or Belarus.

SP”: – Why did they not recognize Abkhazia and South Ossetia? And then they suddenly recognized the DPR and LPR. Is this a signal? To whom and about what?

“Many rightly see North Korea as the avatar of the militant wing of the Chinese party elite. Indeed, in their public statements, Chinese diplomats are always emphatically cautious and politically correct. The toughest messages, sometimes even taking the form of undisguised threats, China prefers to broadcast to the West through Kim Jong-un . Therefore, the official recognition of the DPR and LPR by North Korea can be interpreted as an encouraging signal from Beijing. As for Abkhazia and South Ossetia, their desire for sovereignty went unnoticed by their Asian partners due to the lack of proper information support. Still, the events of 2008 were much less noticeable for the world community than the current Ukrainian crisis.

“SP”: Is this recognition important to Moscow? After all, it was not bought with loans, military assistance and other “good things” …

– Moscow, of course, will take this news with enthusiasm, because it indirectly indicates that China approves of Russian policy in the Ukrainian direction. The timing of this decision is also symbolic – immediately after the retreat of the Armed Forces of Ukraine from the borders of the Luhansk People’s Republic. This can be seen as recognition by the Chinese partners of the successes of the Russian army near Severodonetsk and an incentive for further offensive actions.

“SP”: – The DPRK, by the way, is a nuclear power. Can we say that this recognition is more authoritative than the recognition of Syria? Or Belarus or Kazakhstan?
– Belarus and Kazakhstan in the foreseeable future will not recognize the sovereignty of the republics of Donbass. The decision of Kim Jong-un in its significance somewhat exceeds the decision of Assad. The point is not that North Korea is a nuclear power, because it clearly does not plan to fight for the DPR and LPR, and, most likely, it will not supply weapons to Lugansk and Donetsk. However, the improvement of relations with Pyongyang opens a window to Asia for Donbass. This is important, first of all, from an economic point of view.
“SP”: – And what will they say in the West? Or do they not care anymore?

– After Trump ‘s departure, no one in the West is trying to improve relations with Kim Jong-un. It is unlikely that any European or American politicians will take seriously the latest news from Pyongyang. But Ukrainian propaganda has already managed to mock enough of the recognition of the LPR and DPR by North Korea. Unfortunately, most of the inhabitants of the DPRK is perceived as a country – a meme that personifies totalitarianism, closeness and backwardness. In reality, things are much more complicated.

“SP”: – Will this set an example for any other countries? To whom?
Few can follow the example of North Korea. The reason is banal – fear of the collective West: fear of sanctions, dependence on credit, unwillingness to lose foreign investment. The same Venezuela expects a partial lifting of the oil embargo and does not want to spoil relations with America once again. Perhaps, following the Koreans, the LNR and the DNR will recognize Iran in the event that the nuclear deal finally falls apart.

0 thoughts on “Will the Armed Forces of Ukraine see North Korean commandos on the battlefield?”