HOME / SOCIAL/CULTURAL / What Is Europe? Freedom, Slavery, Austerity or Nothing at All

What Is Europe? Freedom, Slavery, Austerity or Nothing at All 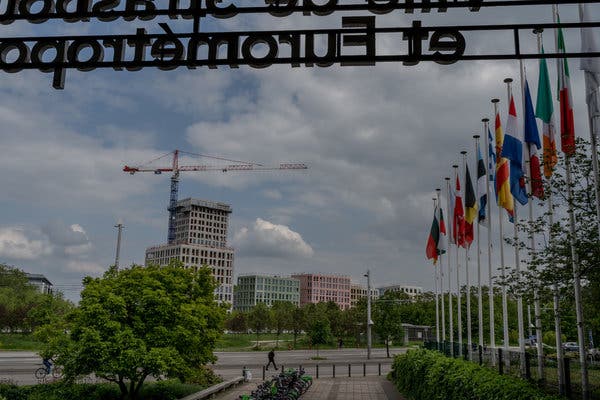 As Europeans go to the polls in a Continental election, a New York Times reporter set out to find out what Europe means to Europeans in 2019.

In his front yard in Poland, Jaroslaw Kurski flies the European Union flag, blue with a circle of yellow stars, and he carries one during street protests against a nationalist government that has chipped away at his country’s young democracy.

“The European flag has become the symbol of resistance,” said Mr. Kurski, the deputy editor of Gazeta Wyborcza, a liberal newspaper based in Warsaw.In northern France, Guy Fünfrock and fellow Yellow Vest protesters at a rainy traffic roundabout talk about resistance, too, but defiantly fly the French tricolor. To them, Europe embodies everything they have come to hate: shuttered factories, stagnating wages and a young banker-turned-president who champions deeper integration.

I met Mr. Kurski and Mr. Fünfrock on a 10-day journey through the European Union before the Continent votes from Thursday through Sunday for the European Parliament. I wanted to know: What does Europe mean to Europeans today?

The election has shaped up as a battle for the soul of Europe — between those who want more Europe and those who would water it down. The decades-old project of unity has rarely been more precarious.

The European Union has grown in successive waves for different reasons — democratizing and developing new members, always with the idea that prosperity and shared values would enhance security for all.

Today that expansion has left the bloc laboring under the weight of its own ideals and ambitions.

I retraced its origin story, starting at the French-German border, where it all began after World War II. Then to Italy, the country where the founding treaty was signed by just six members. I ended in the post-Communist east, where Europe’s newest members, and many of its poorest, joined after the Cold War, eventually bringing the group to 28.

By the end, I felt disoriented, and realized many Europeans did, too. “Freedom,” a German professor said, when asked what the European Union meant to him. “Slavery,” an Italian grandmother said. “Nothing at all,” a French electrician said.

Hope competed with disillusionment, I found. The balance almost invariably depended on opportunity — whether the idea of Europe had opened doors to prosperity, or let in unwanted threats in the form of new states, new values or new people.

In the sleepy Tuscan town of Cascina, Italy, I met a Catholic priest who fretted that Europe had lost its way.

We’re living a big crisis,” the Rev. Elvis Ragusa, 36, said, sitting in an office next to his small church.

As a child, he watched an Italian television series called “Europe Is Us.” There was also a game show that offered up to 1 million lira to the first person to call in and shout “Europa, Europa!” live on air.

It was the 1990s and Europe meant prosperity. “I grew up with that idea that Europe was our future,” Father Ragusa recalled.

But for a new generation, Europe has become synonymous with austerity and the perils of open borders.

Father Ragusa’s town had voted for the left for seven decades. But three years ago, it became the first Tuscan town to switch allegiance to the hard-right, anti-immigrant League party of Matteo Salvini, Europe’s most flamboyant populist leader.

The priest took a small plastic globe off his bookshelf and spun it to show a flagrantly outsized Italian boot protruding from Europe. This is how Italians like to think of Italy today, he said.

Nationalism is winning. “It could be very dangerous,” he said.

His words came back to me in Arezzo, Italy, where an engineer recalled his shock when his 16-year-old daughter gave the thumbs up after she heard on the news that a hundred migrants had drowned.

“Good,” she had said, “that’s a hundred less coming to Italy.” Then, seeing her father’s face, she added: “Look, Dad, don’t be so shocked, everyone thinks this.”

A French teacher from Normandy told me how his students started describing immigrants as “rats” during the 2015 migrant crisis.

After that, he started signing them up for a European exchange program, Erasmus. I met him and his students on the plane to Gdansk, Poland.

“I thought: What can we do at our level to open these kids up to humanist ideas, to the idea of Europe?” the teacher, Mathieu Le Parquois, told me. His grandmother had been deported during World War II, but that was ancient history for his students.

“Not even their grandparents experienced it,” he said.

The place where I still found abundant idealism was in Strasbourg, France, on the border with Germany, where people did remember that history.

There, I met Rita Lemmel, the daughter of a German prisoner of war, who married a French factory worker. Their daughter has both passports, speaks both languages, lives in France and works in Germany. All three dream of a United States of Europe, American-style.

“We should have a president, and governors in each country,” said her French husband, Bruno Lemmel.

But more often, I found that the European Union had become a proxy for big abstract things that people feel threaten their way of life: Migration in Italy. Capitalism in France. Liberal secular values in Poland.

Some were contemplating liberal democracy itself.

“If people were happy,” he added, “why would the populists gain?”

Nowhere did the conversations feel as raw as in Poland, where freedom is both recent and fragile.

Gdansk — the city where World War II started; where the Solidarity union that brought down Communism was born; where Donald Tusk, the president of the European Council, was born, too — was still reeling from the fatal stabbing this year of its mayor, Pawel Adamowicz.

His widow, Magdalena Adamowicz, is running in the European elections after her husband’s murder because, as she put it, Europe means “tolerance.”

Both of her grandmothers survived Auschwitz, she told me. “If you set people against each other, then you can have the same story as before,” she said. The week before I was with her, Polish state television showed images of Mr. Tusk next to images of Hitler and Stalin.

Mr. Kurski, the editor, told me that his paper faces some 30 lawsuits, several from the nationalist government.

Yet in the small Polish town of Swiebodzin, whose claim to fame is a giant statue of Jesus, several people told me that Europe stands for diktat and secularization.

“The E.U. is dictating conditions to Poland,” said a local resident named Borzena, 59, as she stepped out from an evening Mass. Gay marriage and gay adoption were not welcome here, she said.

Opposite the church, a nationalist election poster showed the campaign slogan of the governing Law and Justice party: “Poland is the heart of Europe.”

“We are Polish and we want to stay Polish,” Danuta Bialooka-Kostenecka, a local politician in the north, told me.

Everywhere people wanted their own nation “first.” Especially in Italy.

I spent a day on the campaign trail with Susanna Ceccardi, a 32-year-old rising star of the League, who says Europe is at risk of being Islamized.

As mayor of Cascina, she has instructed the police to remove immigrant hawkers, hired private security guards outside schools and handed out pepper spray to Italian women in her town. She was distributing fliers one recent Saturday, promising to fight “bureaucrats in Brussels.”

Like on that Tuscan square, where the League was the only party campaigning, in Kehl, a contented western German town where the streets are clean, the cars are big and unemployment is low, the only campaign stall I saw belonged to a far-right party, Alternative for Germany.

Its slogan — “Secure the Borders!” — made me think of all the times I had crossed borders on this journey, while barely noticing.

I walked across the Rhine, once a front line between France and Germany.

I took the train from Poland back to Germany, crossing the Oder, another river name associated with a front line.

Those borders have grown taller, said Jeremy Klein, one of the Yellow Vest protesters on the roundabout of Thillois, outside of Reims, France.

An electrician, Mr. Klein works 60-hour weeks and still struggles. He blames Europe. It was after the former Soviet bloc countries joined the European Union that things got tough in France, he said.

“We have sold our know-how to Europe and now we are in competition with workers who are paid less than us,” he said. “We’re just competing with Europe. It is not a fair Europe. I don’t feel European at all. I am French, only French.”

The Kleins have never voted and do not plan to vote in the European elections. “What’s the point?” Mr. Klein said.

After 10 days on the road, my main takeaway was this: Europe cannot be taken for granted. But neither can its demise.

As Father Ragusa put it in Tuscany, Europe is a choice Europeans need to make over and over again.

He spoke of Dietrich Bonhoeffer, a German pastor who was killed by the Nazis and had written about the role a toxic combination of economic hardship and ethnic hatred played in the rise of fascism. What he had written about Germany during its ascent could have been written today, Father Ragusa said.

The question Europe ultimately faces is the same, today as always, he said: “What values do you want to follow? You have a responsibility to decide.”

0 thoughts on “What Is Europe? Freedom, Slavery, Austerity or Nothing at All”