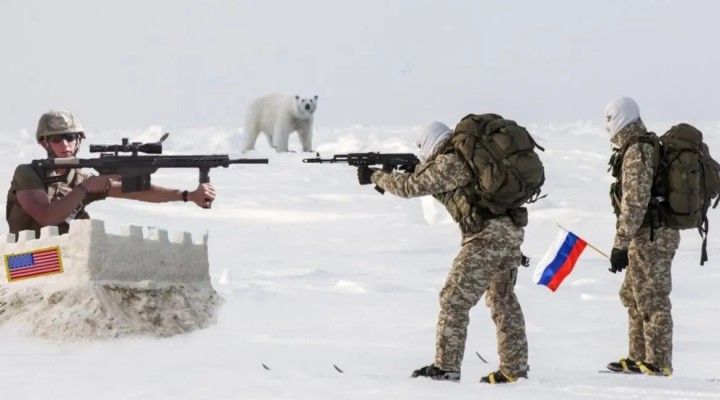 Dmitry Minin- Crimean War 1853-1855 historians sometimes refer to “world war zero” as a prelude to World Wars I and II, not just because of the large number of participants, but primarily because of the depth of coverage. After all, in addition to the Crimea, the Allied attacks on Russia were undertaken in the Baltic Sea on the traverse of Kronstadt, and in distant Kamchatka in the Pacific Ocean, and in the Arctic in the Solovetsky Archipelago. These strikes, of course, were inferior in scope to what was happening in the Crimea, and their main goal was to pull apart the forces of the Russian Empire, to intimidate its population, inciting him against his own rulers through the “thousand cuts” tactics. The British and French studied this ancient Chinese stratagem well during the opium wars, when, due to China’s refusal to buy from them and distribute opium among its population, they staged a formal genocide on its land. This is one of the meanest pages in the history of European “democracy and liberalism.”

Don’t want to be drug addicts? So die!

That old history is truly being repeated before our very eyes, both in geography and in tactics. As usual, the second time mostly in the form of a farce. The main part of the current Crimean War 2.0, or Zero 2.0, takes place in approximately the same territories, but its echoes are heard all over the world.

At the suggestion of the British, their henchmen in Ukraine are thinking about the tactics of “a thousand cuts.” Instead of opium, LGBT “values”, which are, in essence, a destructive drug, are being imposed on people everywhere. And the Western coalition strives to hit Russia in many directions at once, including the northern one. The grounds for this were given to her by the accelerated admission to NATO of the “subarctic” Sweden and Finland. However, this very introduction already gives away a farce. Turkey seems to have agreed to it after all, but now Oslo and Stockholm are “nightmare” by the “devil in the details”, conditional on its final ratification of the agreement by the solution of the problem of the Kurds. In general, Ankara is behaving approximately the way Brussels has behaved for thirty years regarding its entry into the EU, formally not objecting to this, but completely blocking it with “details”.

At the same time, the West began to realize its Arctic ambitions, which were laid down, among other things, in the corresponding strategy adopted by the United States in 2021. The other day, Washington announced that it would for the first time appoint a special envoy for the Arctic to “advance American interests and cooperation with allies and partners in the region.”

According to the American edition of The Hill , a struggle for hegemony over trade and resources is unfolding in the North Pole region. The threat to the Americans, according to the publication, is that the Russian “Arctic Silk Road”, called the Northern Sea Route, can provide a shipping link between Europe and Asia, allowing ships to sail around the Suez and Panama Canals. Now sections of the Russian sea route that goes around the Siberian coast are ice-free in summer. At the same time, “Northwest passage through the Canadian Arctic archipelago and along the coast of Alaska is not feasible and is not being developed . ” Russia has already built as many as 50 defensive outposts from the Barents Sea to territories near Alaska.

One of the Russian bases in the Arctic: “Not with weapons alone!”

For its part, America now has 12,000 troops in its Arctic Airborne Division in Alaska, conducting maneuvers in the region along with the Scandinavian countries, Britain and other members of the Arctic Council. In addition, the Pentagon has more modern fighter jets in Alaska than anywhere else in the world. Six new icebreakers are being built, and the proposed northern satellite and radar surveillance system would cover an area from Alaska to Europe. The American strategy for the Arctic includes the creation of a multi-sectoral force in the region, which would include intelligence, cyber forces, space forces, and electronic warfare units.

At the same time, as The Hill columnist Diane Francis hopes  , “Russia’s costly war with NATO over Ukraine will hinder Moscow’s Arctic ambitions, since the Russian side has lost access to capital, experience and technology as a result of Western sanctions.”

Americans, however, are saddened by the fact that in recent days Russia has agreed to strengthen cooperation with China on the active development of the Arctic, which will allow it to receive the resources it lacks. The WION information resource states: “When two of your old enemies decide to join hands, this can only mean that more troubles should be expected in the future . ” China, they say, is already calling itself a “subarctic state” and is making ambitious plans for the polar “Silk Road”. And such plans clearly do not suit NATO, since this will mean that “America’s two most persistent rivals will operate in its ” backyard “ (?! – D.M.). The North Atlantic Alliance is considering how to increase its presence in the Arctic and expand its investments in order to keep Russia and China out of the region.”

US nuclear submarine at the North Pole

Analysts at the US think tank Civitas are literally sounding the alarm, urging Western countries to “wake up” in the face of “Russian plans to militarize and control the Arctic region.” According to Civitas, Russia is preparing to adopt a law providing for  the mandatory Russian escort of all ships following the Northern Sea Route. And this is the most disturbing news for the West about the fate of this region.

The German Der Tagesspiegel draws attention to the recent statement by NATO Secretary General Stoltenberg that “NATO should increase its presence in the Arctic . ” The Alliance is “already investing in maritime intelligence to get a clear picture of what is happening in the High North , ” Stoltenberg stressed. In his opinion, the Arctic is of “tremendous strategic importance” for NATO, as it is “the most important link between North America and Europe”, as well as “the shortest distance between North America and Russia” .

Russia perfectly sees all these gestures. The same Der Tagesspiegel , for example, notes that at the end of July, at the height of hostilities in Ukraine, President V. Putin took the time to pose an unprecedented challenge to the United States and NATO by introducing a new naval doctrine. The new doctrine clearly states that “the US desire for dominance in the world’s oceans is a challenge to Russia’s national security . ” And will be received accordingly.

Russian Navy in the Russian Arctic!

But if only the Solovetsky Monastery stood in the way of the adversary in the past in the Arctic, now the nuclear icebreaker fleet of Russia “does not stand, but walks” there, which they will seriously oppose for a long time, and, we hope, there will always be nothing. “Broken forehead” about Solovki, and about him – even more so. All recent statements about the buildup of NATO forces in the region are still empty bravado, not backed up by real potential. Yes, and China, watching this “thousand cuts” tactic, probably recalls the period of the “opium wars”, clearly realizing that in this “historical deja vu” it will not be able to stay away. There is simply no alternative to the joint Russian-Chinese development of the Arctic.

The Arctic and the US Air Force