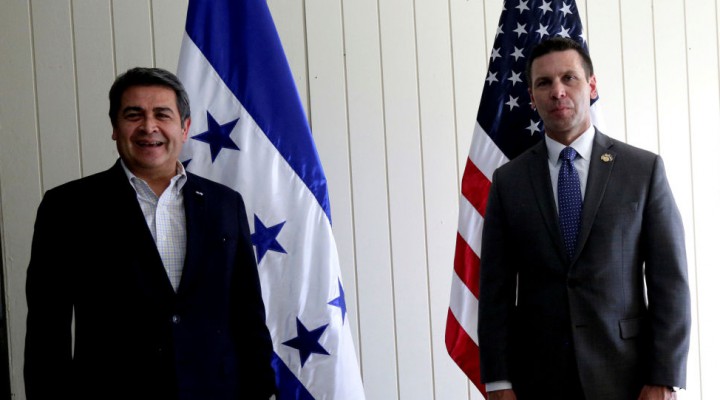 The 2009 coup, openly supported by then-US Secretary of State Hillary Clinton, was approved by the Honduran Congress and the Supreme Court, in violation of the country’s constitution. Now, 10 years later, Hondurans are taking to the streets again in protest of the right-wing measures of their strongarm president, Juan Orlando Hernández, and in remembrance of Zelaya’s short-lived but enormously popular government.

The protests actually began months ago, when students and medical professionals went into the streets in April following the passage of several laws they feared would effectively privatize those sectors of the economy, resulting in massive layoffs. However, the demonstrations quickly snowballed into mass protests demanding not only the cancelation of the International Monetary Fund deal that was driving the privatizations, but the resignation of Hernández himself.

Hernández occupies the presidential office in violation of the Honduran Constitution, which bars presidents from holding office for more than one term. Hernández ran for re-election in 2017 and won in a vote that MintPress News’ Alexander Rubinstein noted “was marred by massive fraud on multiple levels.”

Hernández’s government has repressed the protests with extreme force, including not only tear gas but the firing of live rounds into student protests in the National Autonomous University in the capital of Tegucigalpa last week, killing at least three protesters.

“That has been a sacrifice for the Honduran people, because the side that took power had the support of the United States,” Zelaya told The Grayzone’s Anya Parampil in a Friday interview. “The US is the major beneficiary of the coup. And there is a principle in penal law that says the beneficiary of a crime is the principal suspect.”

Zelaya noted the US now has “almost complete control over Honduras,” not only through international institutions like the IMF, World Bank and Inter-American Development Bank, but also because it controls the main media networks in the country and exerts powerful leverage in Honduran civil society via sympathetic nongovernmental organizations like churches.

“That is, it controls public opinion. It controls the powers of the state,” he said. “And in this way, it has a high interference in the decisions of states like Honduras, poor states, weak states, where their rulers, to receive protection, give up everything to the North Americans.”

“Now the country is in open revolt because 10 years later, you’ve had poverty rates double, violence increase massively, the country becoming destabilized,” Max Blumenthal, editor of The Grayzone, who recently returned from a trip to Tegucigalpa, told Radio Sputnik’s By Any Means Necessary on Wednesday.

“The Autonomous University is a real flashpoint of protest because of privatization and neoliberal reforms on campus, and common people, just average people, come up to us when we whip out a camera in the central square in Tegucigalpa and tell us that the humanitarian crisis here is far worse than Venezuela. They are unable to afford basic medicines, and when they are, those medicines aren’t even available,” Blumenthal told hosts Eugene Puryear and Sean Blackmon.

“The conclusion that I’ve come to is that this is really what Venezuela would be like if Juan Guaido were installed,” Blumenthal noted. “You just have so many of the same factors, and the country and the population are just suffering so massively that you have this massive migration crisis. And I learned yesterday that another Honduran died in ICE [US Immigration Customs and Enforcement] custody. So that’s another thing that we’re learning about here when we talk to regular people in the street is the factors behind the migration crisis, which the US media ignores. And there are political factors: people tell us, ‘If we had a decent government that wasn’t destroying our livelihoods, we would want to stay here. But we can’t.’”

The crisis is driving mass emigration, much of which soon arrives on the US border. According to Syracuse University’s Transactional Records Access Clearinghouse, roughly 1% of Honduras’ 8-million-strong population will attempt to enter the United States as migrants this year, the Los Angeles Times reported in March.

The US’ policies are a major contributing factor, as it continues to support the right-wing governments in Central America’s so-called Northern Triangle: Honduras, Guatemala and El Salvador, three closely-integrated nations just south of Mexico. Among many other people both young and old, LGBTQ people especially find themselves fleeing gang violence and popular discrimination to the US, Sputnik reported.

“Every level of society that was slightly vulnerable before has to pretty much hide” under Hernández’s regime, whose primary social support comes from the Christian right, Blumenthal noted.

And then last month, US President Donald Trump, in an effort to put pressure on the Northern Triangle governments to halt the migration crisis themselves, cut $370 million in financial assistanceto the three countries – something that will only further amplify the crisis.

Blumenthal called the level of corruption in Honduras “comical,” noting that Hernández is under investigation by the US Drug Enforcement Administration for cocaine shipments to the US.

“Even though the DEA has some investigation into Hernández, it is clear that the US Southern Command wants Hernández in power,” Gerardo Torres, secretary of international affairs for the Liberty and Refoundation Party (LIBRE), to which Zelaya now belongs, told Rubinstein in an interview last month.

Indeed, the US air base at Soto Cano is a key SOUTHCOM pivot in the region, housing the expeditionary task force Joint Task Force Bravo and sporting a runway capable of handling the largest US military transport aircraft. The base was used to supply, among other things, the Contra guerrillas in Nicaragua in the 1980s, a right-wing militia that sought the overthrow of President Daniel Ortega. After Zelaya’s 2009 ouster, plans to force the US to turn Soto Cano into a civilian airfield were scrapped.

Blumenthal noted that US political discourse surrounding Honduran migration ignores the political and historical context, making it sound as if Hondurans are coming to the US because their country is simply innately “poor.”

“The repression is getting so extreme that [the US] Congress has … introduced the Berta Caceres Act. It has 65 co-sponsors, and the list is growing, and this act calls on the US to suspend military cooperation with Honduras, which would be a huge blow to the national security state,” Blumenthal said.

“And finally, you have a program the Hernández government has implemented in schools to encourage a militaristic mindset among youth and to encourage youth to join the Honduran military, because it’s one of the few opportunities they’re going to have as he privatizes schools,” Blumenthal said. He noted the Honduran government was “using the model that was implemented in Washington, DC, and New Orleans, and many other cities … so-called ‘education reform.’ They’ve actually set up charter schools here, and they’ve even attempted to set up ‘charter cities,’ in a program advised by none other than Grover Norquist, the right-wing Republican libertarian who said his goal was to ‘drown the federal government in a bathtub.’”

“So right now I’m just standing in the middle of this vast neoliberal laboratory, and people are suffering, the country’s on fire, and the US media is ignoring it.”

0 thoughts on “Ten Years After Anti-Zelaya Coup, Honduras is a ‘Vast Neoliberal Laboratory’ Key to US Imperialism”