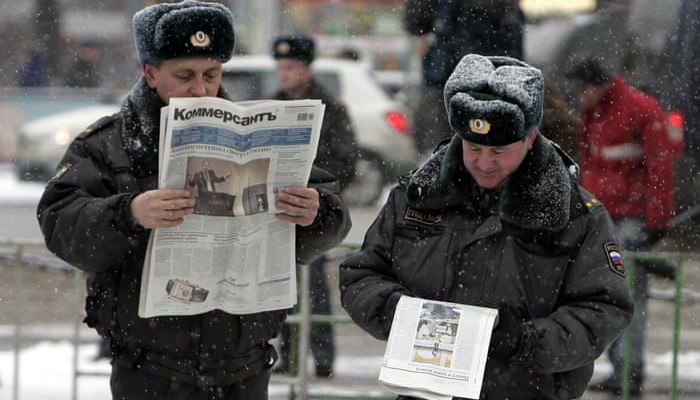 Piers Robinson, The Guardian- Manipulation of the news for propaganda purposes is not the prerogative of the west’s enemies. It’s vital to look at all media, including the UK’s, with a critical eye

As tensions continue to escalate with Russia, increasing attention is being paid in western media to what are frequently described as the “propaganda” activities of Vladimir Putin’s regime. The Sun headlines “Putin’s glamorous propaganda girls who front a new UK-based news agency ‘that aims to destabilise Britain’” in reference to the recent establishment of Sputnik News in Edinburgh, while the Mail describes how “Vladimir Putin is waging a propaganda war on the UK”.

Most recently in the Times, a study by an MPhil student at the University of Oxford, Monica Richter, is reported to confirm that people who watch the 24-hour English-language news channel Russia Today (RT) are more likely to hold anti-western views. The tone of the Times article is clear: RT uses unqualified and “obscure” experts, is frequently sanctioned by Ofcom for bias and failure to remain impartial and, worst of all, actually seems to be “turning viewers against the west”. Perhaps the intended subtext of this particular news story is to warn people off watching non-western media for fear of betraying their home country in some way.

Whatever the accuracy, or lack thereof, of RT and whatever its actual impact on western audiences, one of the problems with these kinds of arguments is that they fall straight into the trap of presenting media that are aligned with official adversaries as inherently propagandistic and deceitful, while the output of “our” media is presumed to be objective and truthful. Moreover, the impression given is that our governments engage in truthful “public relations”, “strategic communication” and “public diplomacy” while the Russians lie through “propaganda”.

Neither of these claims has significant academic support. A substantial body of research conducted over many decades highlights the proximity between western news media and their respective governments, especially in the realm of foreign affairs. For reasons that include overreliance on government officials as news sources, economic constraints, the imperatives of big business and good old-fashioned patriotism, mainstream western media frequently fail to meet democratic expectations regarding independence. In our own study of UK media coverage of the 2003 Iraq invasion, Manchester University found that most UK mainstream media performed to reinforce official views rather than to challenge them.

As for the supposedly benign communication activities of our own governments – again, there are ample grounds to challenge the understanding that the “strategic communication” activities of our governments can be understood as free from the kind of manipulative “propaganda” of which the Russian government is accused. Indeed western governments frequently engage in strategies of manipulation through deception involving exaggeration, omission and misdirection. This was recently observed quite clearly during the run-up to the Iraq war when intelligence was manipulated in order to mobilise public support for the Iraq invasion.

Moreover, the recent Chilcot report describes how, in the early days after 9/11 “regime-change hawks” in Washington argued that “a coalition put together for one purpose (against international terrorism) could be used to clear up other problems in the region”. Tony Blair had discussed how phases 1 and 2 of the “war on terror” would require a “dedicated tightly knit propaganda unit”.

One might reasonably conclude from all this evidence that the western public fell foul of a major deceptive propaganda campaign which involved exploiting terrorism threats in order to “clear up other problems” and which was instigated by our own governments and communicated through “our” media. Propaganda and deception is not, it would appear, the sole preserve of non-western states; it is alive and well in western democracies.

These are confusing times for consumers of the news, and the issue of which media outlets should be trusted is as demanding and critical as ever. Given the level of conflict and potential conflict in the world today, plus pressing global issues regarding environmental crisis, poverty and resources, it is essential that people learn to navigate the media and defend themselves against manipulation. The first step towards becoming more informed is to avoid seeing our governments and media as free from manipulation while demonising “foreign” governments and media as full of propagandistic lies.

The second step is to recognise that one can gain useful insights and information from a variety of news sources – including those that are derided as “propaganda” outlets: Russia Today, al-Jazeera and Press TV should certainly not be off-limits. Mainstream media, wherever it may be based, is widely acknowledged to be overly deferential to political and economic power and that means, as consumers of news, we also need to think about exploring alternative news and information sites such as Media Lens and Spinwatch. And, more broadly, we need to become more aware of the strategies of manipulation that all governments employ in order to shape opinions and conduct.

In an age when thinktanks and “public relations” experts dominate media output, it might also be time to engage academics more fully as sources of (relatively) independent comment and analysis. These steps might strike many as all too demanding and time consuming, but we live in demanding times and the stakes are getting higher every year. The need for the public to become informed and defend itself against manipulation is greater than ever.