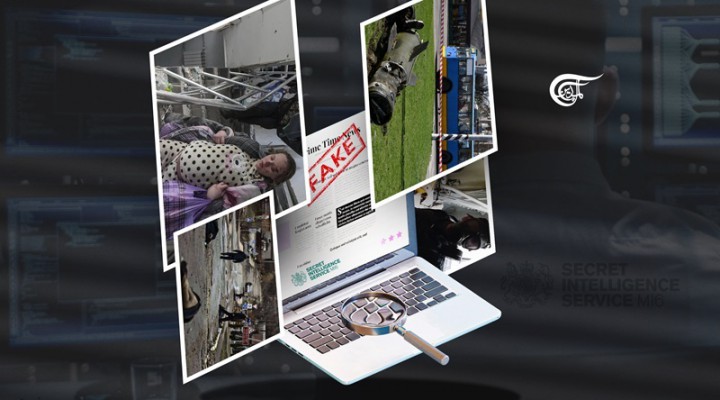 David Miller- Recent events in the UK reveal the lengths to which western intelligence services will go to strangle and suppress anti-imperialist sentiment.

A shocking story has emerged from leaked emails showing that a prominent supposedly left-wing journalist  – Paul Mason – has been in close contact with a senior British intelligence official in an attempt to target critics of the NATO proxy war in Ukraine, including the author of this piece.

The emails show Mason and his MI6 handler, Andy Pryce, plotting to set up an organisation  – a ‘cut out’ as he called it – using well-known intelligence lingo – to target critics of the NATO proxy war in Ukraine. In one leaked email, Mason advocated the creation of “a kind of permanent rebuttal operation” to discredit critics of the Ukraine adventure. In another, he declared that “the far left rogue academics is who I’m after,” in an apparent reference to a small group of academics producing evidence-based critiques of UK foreign policy, of which the present author is one.

Mason went on to produce a crude and widely ridiculed ‘map’ of the dissidents he was after and – in a move which surely shows his ‘informant’ role – sent it to his MI6 handler Andy Pryce. In another email, Mason passed on to his MI6 handler the name of an anti-war dissenter who had argued with Mason at a pro-war demonstration. He wanted British intelligence to tell him who was ‘pulling his strings’.

This apparent obsession with Russian influence and ‘disinformation’ is of course really a concern that Western lies are being exposed.  The war in Ukraine has seen perhaps the largest number of lies in recent times.  The catalogue of deceptions from the alleged Russian atrocity at Snake Island (where the posthumously decorated soldiers turned out to be alive), the fake story of the Ghost of Kiev, to the misinformation put out by Ukraine and supported by the west about the bombings of the Mariupol maternity hospital, the Mariupol Mosque (debunked by the Imam of the Mosque and the Turkish foreign minister) and the theatre, to the quickly exposed lies about the alleged Russian attack on Kramatorsk, followed by the now receding memory of the alleged Russian massacre in Bucha.  All of these have been fake news of one sort or another and it is the function of intelligence officials like Pryce to pretend that the truth about these events is actually just Russian disinformation. Anyone who mentions any particular truth is derided for echoing Putin’s “talking points”.

Pryce had first been exposed as an intelligence officer through his involvement as the handler of a Foreign Office-funded project called the Integrity Initiative, which was tasked with countering Russian disinformation.  But following a huge leak of internal government documents, his role was publicised and he took steps to cover his tracks including deleting his LinkedIn page in late 2018. The Integrity Initiative leak effectively sunk the organisation when complaints to the Scottish charity regulator were made about the parent organisation. It had emerged that its official headquarters was a derelict mill in the Scottish countryside, that it was run by military intelligence officers and had a career MI6 officer – Guy Spindler –  as its Chief Operating Officer. Worse it was discovered that it had spent significant energy attacking the leader of the opposition Jeremy Corbyn as a dupe of Russia, rather than actually combatting supposed Russian disinformation. The regulator concluded that the purposes of the Integrity Initiative were “not entirely charitable” and it was closed down.

This episode is though not an isolated example of the very significant assault that the UK, US, “Israel” and others are unleashing on critics of their global military adventures.

Mason alludes in the emails to the other issues where the suppression of the trust has been at the forefront of the ‘talking points’ issued covertly by MI6 to pro-NATO journalists.  He pointed in particular to the question of the alleged chemical weapons attack in Syria and the idea that antisemitism slurs against the left in the UK were ‘a scam’ – or in other words to two areas where there have been massive intelligence-led operations. The biggest Syrian operation has been around the alleged “chemical weapons” attack on the city of Douma in early 2018.  Western governments insisted that the Syrian military had used nerve agent and/or Chlorine dropped from a helicopter and that this resulted in the deaths of over 40 civilians. This provided justification for the Western bombing of Syria shortly thereafter.

Later, as a result of independent investigations and then the emergence of whistle-blowers from within the Organisation for the Prevention of Chemical Weapons, it became clear that no nerve agent was used as had been claimed by pro-Western sources, that the bodies of the civilians allegedly killed and indeed the Chlorine cylinders allegedly used in the attack had been tampered with and moved, that the lack of glass in the windows in the apartment block would have made it exceptionally difficult to kill anyone with Chlorine and – finally that a four-person German NATO toxicology panel -commissioned by the OPCW – determined that Chlorine was not the cause of death. These and other anomalies suggested  – as the OPCW weapons inspectors had concluded in their first (suppressed) report – that this was most likely a ‘staged’ event. These explosive facts are dismissed as ‘disinformation’ and ‘conspiracy theory’ by the likes of Mason and the burgeoning disinformation industry copiously funded by the US, UK, and “Israel”. But, in reality, they are strongly evidenced. It has transpired, as a result of further leaks of government documents, that many of the organisations involved with the armed opposition to the Assad government, from at least 2012, some of which were implicated in fabricating evidence of chemical weapons attacks, have also been funded by the UK Foreign Office. Some of the groups are staffed or directed by serving or former MI6 (British foreign intelligence) officers or those with a background in military intelligence, for example, ARK, Mayday Rescue (which operated the ‘White Helmets’ and whose founder James Le Mesurier, a former military intelligence officer who died in mysterious circumstances in Istanbul in November 2019), Tsamota, or the Centre for International Justice and Accountability. It is not clear how many of these had MI6 officer, Andy Pryce, as their handler.

Since 2015 there has been an alleged epidemic of Judeophobia sweeping Western countries, especially the UK.  It was targeted especially at the then newly elected leader of the UK Labour Party, Jeremy Corbyn.  It is now clear that the campaign was a propaganda campaign directed from “Tel Aviv” by the Ministry of Strategic Affairs, the government department charged with tackling Boycott, Divestment, and Sanctions. Staffed by significant numbers of intelligence agents, the ministry covertly directed significant quantities of cash through a private company set up for the purpose, the aim being to secretly funnel propaganda funds to pro-“Israel” groups new and old alike, and thus bypass transparency rules – especially in the US. In the UK, a whole raft of new pro-“Israel” groups was set up as a result of this strategy (including The Campaign Against Antisemitism, Sussex Friends of Israel, and social media troll farms emerging around the GnasherJew Twitter account)  and they were at the forefront of the campaign against Jeremy Corbyn. However, the strategy needed not just infrastructure but ideological work to modify the notion of ‘anti-Semitism’ into the ‘new antisemitism’.  This is held to have significant overlap, sometimes to be indistinguishable from ‘anti-Zionism’, the racist state ideology of the Zionist movement, and ‘Israel’. The use of ‘the new antisemitism’ strategy as a diplomatic weapon was formalised with the creation of the Global Forum for Combating Antisemitism in 2000 by former Israeli ministers Natan Sharansky and Rabbi Michael Melchior. Its ‘first large International Conference’ took place in 2007, followed by two more in 2008 and 2009.

The Global Forum has been part of “Israel’s” efforts to (i) redefine antisemitism so that it becomes less about hatred of Jews as Jews and more about fighting anti-Zionism, and (ii) build the myth of ‘Muslim antisemitism’, thereby allowing pro-“Israel” groups around the world more latitude to demonise Muslim political movements and a more overt outlet to join with governments in securitising, surveilling and penalising Muslim communities. It was the forum that – in 2015 – began the push to introduce and formalise the IHRA working definition of Antisemitism, which has been the weapon of choice in attacking the left, Muslims, and Palestine solidarity work.

The level of harassment, bullying, intimidation, and misinformation caused by these campaigns against the international anti-Imperialist movement is increasing in intensity and  – in the Ukraine war – has succeeded in peeling off some layers of the erstwhile left.  However, slowly but surely, the truth about the illegitimate role played by the security apparatus of Western states is emerging.

0 thoughts on “How Disinformation Works: Western Intelligence Agencies Global War on the Left”