HOME / Politics / European colonizers killed so many indigenous Americans that the planet cooled down, a new study reveals

European colonizers killed so many indigenous Americans that the planet cooled down, a new study reveals 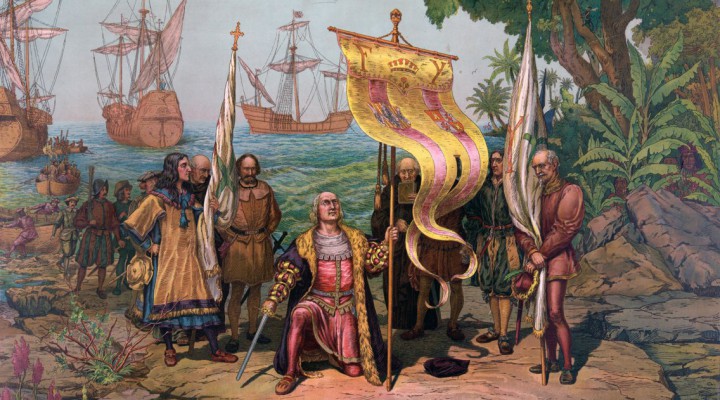 Prior to Columbus’s arrival in the Americas in 1492, the area boasted thriving indigenous populations totaling to more than 60 million people.

A little over a century later, that number had dropped close to 6 million.

European contact brought with it not only war and famine, but also diseases like smallpox that decimated local populations. Now, a new study published in the journal Quarternary Science Reviews shows that those deaths occurred on such a large scale that they led to a “Little Ice Age”: an era of global cooling between the 16th and mid-19th century.

Researchers from University College London found that, after the rapid population decline, large swaths of vegetation and farmland were abandoned. The trees and flora that repopulated that unmanaged farmland started absorbing more carbon dioxide and keeping it locked in the soil, removing so much greenhouse gas from the atmosphere that the planet’s average temperature dropped by 0.15 degrees Celsius.

Typically, experts look to the Industrial Revolution as the genesis of human-driven climate impacts. But this study shows that effects may have began some 250 years earlier.

“Humans altered the climate already before the burning of fossil fuels had started,” the study’s lead author, Alexander Koch, told Business Insider. “Fossil fuel burning then turned up the dial.”

Experts have long struggled to quantify the extent of the slaughter of indigenous American peoples in North, Central, and South America. That’s mostly because no census data or records of population size exist to help pinpoint how many people were living in these areas prior to 1492.

To approximate population numbers, researchers often rely on a combination of European eyewitness accounts and records of “encomienda” tribute payments set up during colonial rule. But neither metric is accurate — the former tends to overestimate population sizes, since early colonizers wanted to advertise riches of newly discovered lands to European financial backers. The latter reflects a payment system that was put in place after many disease epidemics had already run their course, the authors of the new study noted.

So the new study offers a different method: the researchers divided up North and South America into 119 regions and combed through all published estimates of pre-Columbian populations in each one. In doing so, authors calculated that about 60.5 million people lived in the Americas prior to European contact.

Once Koch and his colleagues collated the before-and-after numbers, the conclusion was stark. Between 1492 and 1600, 90% of the indigenous populations in the Americas had died. That means about 55 million people perished because of violence and never-before-seen pathogens like smallpox,measles, and influenza.

According to these new calculations, the death toll represented about 10% of the entire Earth’s population at the time. It’s more people than the modern-day populations of New York City, London, Paris, Tokyo, and Beijing combined.

The disappearance of so many people meant less farming

Using these population numbers and estimates about how much land people used per capita, the study authors calculated that indigenous populations farmed roughly 62 million hectares (239,000 square miles) of land prior to European contact.

That number, too, dropped by roughly 90%, to only 6 million hectares (23,000 square miles) by 1600. Over time, trees and vegetation took over that previously farmed land and started absorbing more carbon dioxide from the atmosphere.

Carbon dioxide traps heat in the planet’s atmosphere (it’s what human activity now emits on an unprecedented scale), but plants and trees absorb that gas as part of photosynthesis. So when the previously farmed land in North and South America — equal to an area almost the size of France — was reforested by trees and flora, atmospheric carbon-dioxide levels dropped.

Antarctic ice cores dating back to the late 1500s and 1600s confirm that decrease in carbon dioxide.

That CO2 drop was enough to lower global temperatures by 0.15 degrees Celsius and contribute to the enigmatic global cooling trend called the “ Little Ice Age,” during which glaciers expanded.

Not all scientists are convinced by Koch’s explanation.

“The researchers are likely overstating their case,” Joerg Schaefer from the Lamont-Doherty Earth Observatory of Columbia University, told Live Science. “I am absolutely sure this paper does not explain the cause of the carbon dioxide change and the temperature change during that time.”

Koch said that some of the drop in carbon dioxide could have been caused by other, natural factors like volcanic eruptions or changes in solar activity. But he and his colleagues concluded that the death of 55 million indigenous Americans explained about 50% of the overall reduction in atmospheric carbon dioxide.

“So you need both natural and human forces to explain the drop,” he said.

Koch said the findings revise our understanding of how long human activity has been influencing Earth’s climate.

“Human actions at that time caused a drop in atmospheric CO₂ that cooled the planet long before human civilization was concerned with the idea of climate change,” he and his co-authors wrote.

But they warned that if a similar reforestation event were to happen today, it wouldn’t do much to mitigate the Earth’s current rate of warming. The drop in atmospheric carbon dioxide that happened in the 1600s only represents about three years’ worth of fossil fuel emissions today, Koch said.

“There’s no way around reducing fossil fuel emissions,” he said, adding that reforestation and forest restoration remain crucial, too.

0 thoughts on “European colonizers killed so many indigenous Americans that the planet cooled down, a new study reveals”