Climate change visualized: How Earth’s temperature has changed since 1970 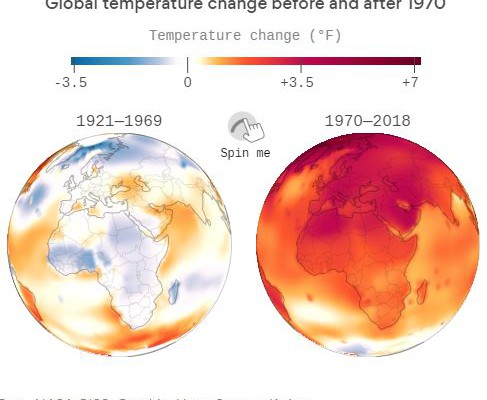 Why it matters: The yearly rankings don’t tell the whole story of long-term climate change, since natural variability can still push or pull an individual year up or down the rankings. However, the overall picture is growing starker with each passing year. Nine of the 10 warmest years on record since reliable data began in 1880 have occurred since 2005. At the same time, greenhouse gases from the burning of fossil fuels — as well as deforestation and intensive agriculture — have skyrocketed to levels not seen in more than 800,000 years.

The latest: An unusually warm April followed a top 3 hottest March, and indicates that the Earth is headed for yet another top 3 warmest year on record. In addition, Arctic sea ice extent reached a record low for April, NOAA reports. This follows recent news that carbon dioxide levels in the atmosphere edged past 415 parts per million for the first time in human history, likely becoming the highest level on record in at least 3 million years.

By the numbers: For 2018, the average temperature across global land and ocean surfaces was 1.42°F (0.79°C) above the 20th century average, according to NOAA.

Between the lines: Global average surface temperatures are edging closer to the 1.5°C aspirational warming target contained in the Paris climate agreement, which many low-lying island nations see as key to their survival, but the world’s energy system is marching in the wrong direction for limiting global warming’s severity.

0 thoughts on “Climate change visualized: How Earth’s temperature has changed since 1970”