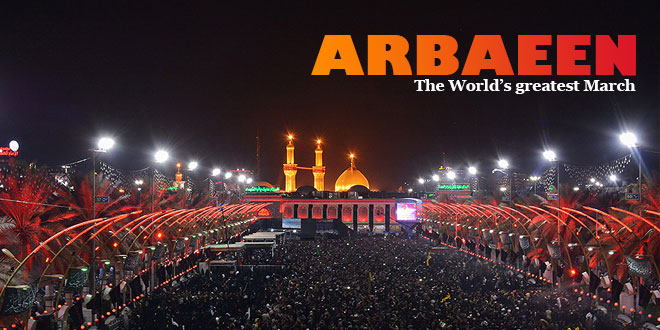 Although Arbaeen forever remains the greatest tradition of Shia Islam, Arbaeen nevertheless belongs to all people, all faiths, and all circumstances.

Catherine Shakdam- – Unknown to most, ignored by many for its message would disturb those truths an elite carefully architected around Islam, millions of men, women, and children took part yet again this November in the greatest pilgrimage known to man in Iraq: the pilgrimage of Arbaeen.

According to Iraq’s prime minister office an estimated 14 million people flocked to the holy city of Karbala to remember Imam Hussain’s martyrdom – the grandson of the prophet Muhammad.

If few still can appreciate the magnitude and sheer awesomeness of such feat, especially if we consider that only a few months ago Iraq stood besieged by Daesh army, the pilgrimage of Arbaeen is also more than just a victory cry against Terror, or yet another exercise in religious piety. Arbaeen is the best of what Islam has to offer: an invitation of peace to the whole of humanity, and a promise that for every oppression a voice will rise up in defiance.

Arbaeen I would venture is to the image of the man it commemorates: Hussain ibn Ali, he, who alone before a furious army, stood taller than Tyranny itself so man would learn to stand free in their truth, beyond all manners of oppression.

If heroes have been many, none have inspired more love and devotion than Imam Hussain … none either have commandeered to their name more communities, nations, and flags.

Although Arbaeen forever remains the greatest tradition of Shia Islam, Arbaeen nevertheless belongs to all people, all faiths, and all circumstances. The one place where all manners of differences cease to matter, Arbaeen sits a celebration of our collective humanity – a communion of people under one majestic ideal: Freedom in Justice.

I realise today that ‘religiosity’ is not as trendy as uber secularism but I will ask you, readers to humour me for a second. Religion for the most part has been blamed for much of the violence we have witnessed, endured, and confronted over the years.

Religion we have often been told as well has led men to butcher others so that their god could tower all mighty … Well actually not just any religion, but rather Islam.

But Islam really has nothing to do with the Terror Daesh/ISIS has carried underneath its flag. It is rather the doctrine Daesh’s architects have formulated in its name that came to pollute our public discourse and set ablaze communities.

This Terror by the way is old … as old as the pilgrimage of Arbaeen in fact since it is its army Imam Hussain came to confront in the plains of Karbala so that Islam could be reclaimed to the light, away from the deviance of man.

Arbaeen marks the end of the mourning period of the martyrdom of Hussain ibn Ali, Third Imam of Islam and grandson to the Prophet Muhammad.

As well as a religious pilgrimage, Arbaeen is also a reminder that for every tyranny autocrats will raise, resistance movements will rise up.

I hope readers will appreciate how the land which saw fall the greatest martyr of all, was inspired to rise up against the greatest threat humanity has had to face thus far: Daesh.

On that of course the world media seldom talk about. And yet we should talk about it. We should absolutely tell the tale of Arbaeen and how one man inspired millions upon millions every year for 13 centuries to challenge death itself to reach his banner.

If Arbaeen stands today the greatest pilgrimage of all time, the road from Najaf to Karbala, that road pilgrims have walked on to finally reached Imam Hussain shrine, has not been an easy one to walk onto.

For 13 centuries the Shia of Ali have faced persecution, oppression, and repression … never however did their resolve waver. Why not you may ask? Why not simply give up and claim safety?

Quite simply because there can never be justice without freedom or safety without dignity!

Arbaeen today speaks most loudly of the courage of one people: the Iraqis. And while I wish not to take away from the courage of others, none like the Iraqis have taught the world what resilience in the face of absolute oppression looks like, and what true courage of the heart entails.

It is not just Resistance Iraqis have offered the world through their stand against Daesh, but a lesson in humanitarianism.

I was privileged enough this year to partake in this pilgrimage, and never have I ever witnessed such a display in selfless compassion and generosity than in Iraq.

To think that Iraqis lost so much over the decades and yet could give everything to perfect strangers so as to honour the memory of their Imam is a humbling experience.

To witness the strength of a people through their willingness to give others what they do not allow themselves for they have so little is awe-inspiring.

In between Najaf and Karbala I witnessed the best of humanity … I saw hands offered in service, arms outstretched to welcome the weary and the sick, food and water given to the hungry and the thirsty …

In between those two Iraqi cities I saw what humanity should look like if only we tried a little harder.

Every year the holy city of Karbala manages the impossible by opening its doors and its heart to millions of pilgrims on the strength of its people’s generosity alone. For several weeks every year, pilgrims are offered food, water, medicine, and shelter completely free of charge.

No cities in the world can claim such a feat … not even the holy city of Mecca under al-Saud custodianship.

There is something to be said of Islam and its people when for the name of one man, for the love of the son of Ali ibn Abutalib, all are willing to evaporate their prejudices to rise as brothers in the face of oppression.

There is something to be said of the Iraqis when in spite of all the hurts and all the pain they were made to endure they remain devoted to helping others under that banner they cherish most of all – that of Hussain ibn Ali.

There is something to be said also of those who continue to deny Arbaeen for speaking it to the public would be to admit that Islam can inspire the best humanity has to offer.

I have walked in between Najaf and Karbala and all I saw was beauty!

This article was originally published on HuffingtonPost, 11/15/2017