HOME / Multimedia / Scott Ritter: NATO is a Suicide Pill for the World… Pray that Russia Wins

Scott Ritter: NATO is a Suicide Pill for the World… Pray that Russia Wins 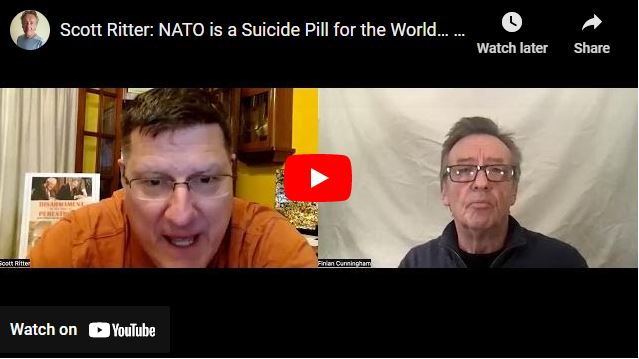 The conflict is not about defending Ukraine as the Western media would tell us, it is and always has been about defeating Russia.

NATO is already now in a direct war with Russia and Russia has every right to strike targets in NATO countries like Germany and Poland that are acting as logistical centers in the supply of munitions to Ukraine.

Washington and its NATO allies are recklessly raising the stakes of military victory or defeat, rather than trying to find a diplomatic, political solution to a long-running conflict. Ukraine is being callously exploited as a proxy for the US-led NATO war on Russia.

As Ritter points out, NATO is a suicide pill for the world. If its objective proceeds, the result will be a general all-out war with Russia that will go nuclear, meaning the destruction of the planet.

That’s why, Ritter argues, every peace-loving person regardless of nationality should be praying that Russia wins this conflict in Ukraine and defeats the NATO agenda. NATO’s war plans have been seeded years ago with the coup in Kiev in 2014 and the weaponizing of NeoNazi Ukrainian forces. The Ukrainian top commander Valery Zaluzhny is a devotee of WWII Nazi collaborator and mass murderer Stepan Bandera. This is who the Americans and Europeans are now collaborating with in prosecuting their war plans against Russia.

Fortunately, Ritter predicts, Russia is going to win the war. This is a nightmare scenario for the US-led Western powers who have invested so much in the war yet stand to incur a historic defeat.

But it should be understood widely that it is the United States and its allies who are pushing the world to the brink of disaster.

Let’s Nuke The World Over Who Governs Crimea: Notes From The Edge Of The Narrative Matrix

US, Allies Send More Weapons to Ukraine in Absence of Real Solution

Is a Real War about to Break Out in Ukraine?

Why’d Zelensky Humiliate Himself By Telling The Davos Elite That Putin Might Have Already Died?

CIA Chief Warns Zelensky of Assassination (…by the CIA)

0 thoughts on “Scott Ritter: NATO is a Suicide Pill for the World… Pray that Russia Wins”