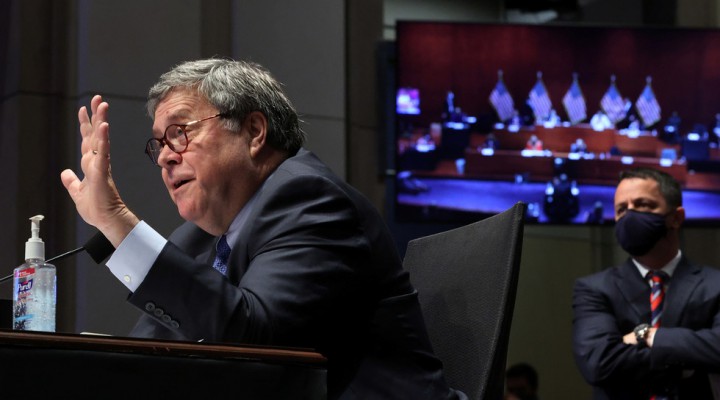 The appearance of Attorney General William Barr before the House Judiciary Committee has put on display for the entire world the level of highly-charged, partisan political dysfunction that has paralyzed the US.

The hearing was never going to end well. But even the most jaundiced of American political observers could not have predicted the venality and animus that tainted every aspect of Attorney General William Barr’s appearance before the Democratic-led House Judiciary Committee on July 28.

Barr, who had previously served as Attorney General under President George HW Bush, had never testified before the House Judiciary Committee. Anyone expecting a modicum of decorum befitting the inaugural appearance of the nation’s premier law enforcement official before the legislative body, mandated to provide oversight of the American justice system, would have been greatly disappointed with the proceedings. The hearing was more than simply a travesty – it was a national embarrassment.

To call the proceedings, presided over by Committee Chairman Jerry Nadler, a Democrat from New York, a “hearing” would be to inject meaning into the concept that no dictionary could ever provide. By definition, a hearing is a process that provides a person the opportunity to state his or her case. But Jerry Nadler and his fellow Democrats on the Judiciary Committee had no intention of providing Attorney General Barr an opportunity to state his case, or to adequately respond to questions posed by the Congressional representatives.

Likewise, the Republicans on the Committee used their time not to probe the myriad  important issues facing the nation that a prominent figure such as William Barr was eminently, and indeed uniquely, positioned to answer, but rather attack their Democratic counterparts and defend the Attorney General. In short, the oversight process that a hearing of this magnitude is supposed to facilitate was not well served, which means the American people who elected those members of Congress who sit on the Judiciary Committee to represent their interests were similarly ill-served.

There is no doubting the reality that the US is embroiled in events of grave importance which will shape the future of the nation and its people–American cities are wracked by social unrest stemming from decades of frustration over police brutality grounded in systemic racism, while the nation as a whole is struggling to cope with the horrible reality of the Covid-19 pandemic, the consequences of which have been magnified by mismanagement at every level of government.

After three and a half years of a Trump Presidency, the American people are preparing for an election in November which many observers claim will decide the future of the nation, all the while the ability of the US to carry out a national election, free of foreign influence and domestic voter fraud, erodes trust and confidence in this all important process of political empowerment. These are all important issues, ideally suited for the kind of open, forceful give-and-take a properly convened and executed oversight hearing is supposed to provide.

“I reclaim my time.” This phrase dominated William Barr’s appearance before the Judiciary Committee. As a parliamentary maneuver, the notion of “reclaiming time” allows a member of Congress to regain control of the clock, so to speak, after yielding time to another member or a witness for the purpose of answering a question or providing clarification. In an environment where Congressional members seek to exploit every second of their allocated five minutes for making a statement and asking questions of a witness, the process of “reclaiming time” allows the Representative the ability to prevent his or her time from being wasted by a witness seeking to filibuster.

Still processing what the fuck we just saw in that Barr hearing.

The process presupposes ill intent on the part of a witness. It was not, however, intended to deny a witness the opportunity to respond to questions and/or personal attacks. And yet William Barr’s presence before the Judiciary Committee was marked by the Democrats’ repeated use of this phrase, silencing Barr at every turn and turning what was supposed to be a collegial exercise in parliamentary questioning into a partisan display of one-sided vindictiveness which served no other purpose except to attack and embarrass the Attorney General and, by extension, President Trump.

The spectacle that unfolded on live television, however disappointing it may have been from the perspective of American democracy, was to be expected. Under Jerry Nadler, the House Judiciary Committee had become the front-line for the so-called “resistance”, comprised of like-minded Democrats sworn to oppose President Trump, whom they believed had come into office illegitimately, with the help of Russian interference. The Judiciary Committee helped facilitate the work of Special Prosecutor Robert Mueller in investigating allegations of Russian collusion with the Trump campaign during the 2016 Presidential election, and voted for articles of impeachment which were ultimately rejected by the US Senate earlier this year.

Nadler has been unyielding in his opposition to the Trump presidency. The Judiciary Committee hearing he presided over was nothing less than a process of character assassination cloaked in parliamentary procedure. At the end of the day, however, Nadler’s efforts to undermine Trump by attacking Barr failed. Barr’s calm demeanor contrasted sharply with the rancor of the House Democrats, and his answers–when he was afforded an opportunity to speak–were on target. But the biggest failure was that of American democracy.

The Barr hearing was little more than cheap political theater, exposing the Democrats and Republicans alike as rabid partisans playing a zero-sum game of political “gotcha” while the nation and people they represent rot physically, morally, and intellectually. The sad fact is that, come November, when the American people go to the polls in an opportunity to reclaim their country from politicians who so poorly serve them, they are left with two choices—Republican or Democrat—neither of which has demonstrated a willingness or desire to put the good of the people above party politics. This, more than anything, is the definition of American dysfunction—the notion of choice where there is, in fact, no choice at all.

Washington, the Cesspool of the World, Will Never Rat on Itself

AJ Barr heading for jail too: Trump’s hatchet man to be scapegoated to save “the Donald”

Journalism in an Era of Delusional Politics

Informed Speculation: How the Right Took Down Trump, Now a “Dead Man Walking”