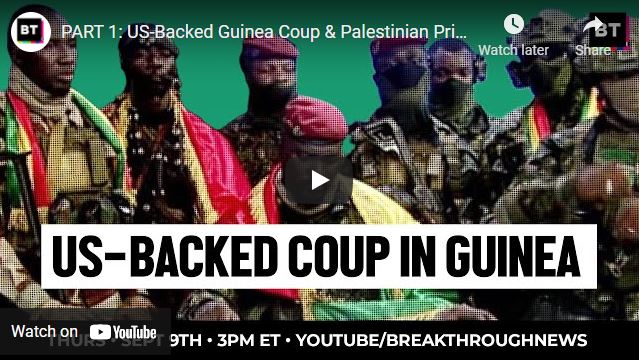 Why is the US backing a coup in Guinea? Would it surprise you to learn it may be related to US aggression against China? Kambale Musavuli, activist, writer, and analyst with the Center for Research on the Congo-Kinshasa, explains.

Several Western outlets are accusing the Ethiopian government of committing genocide in the Tigray region. Are these claims truthful or yet more interventionist propaganda? Jeff Pearce, historian, journalist & author of “Prevail: The Inspiring Story of Ethiopia’s Victory over Mussolini’s Invasion, 1935-1941” and the forthcoming book “The Gifts of Africa: How a Continent and Its People Changed the World,” breaks it all down for us.

It’s been over a week since Hurricane Ida swept across the country, but its devastating effects are still being felt in places like Southern Louisiana. While the New Orleans levees held, many in nearby areas broke. Stepping in where the state has failed, community organizations are the primary aid givers for those suffering from destruction and displacement. Flozell Daniels, Jr., President & CEO of Foundation for Louisiana, member of the Governor’s Climate Initiatives Task Force & Louisiana Public Defender Board, and Charlotte Clarke, Executive Director of Common Ground Relief & environmental activist, tell us more about what’s happening on the ground.

Six Palestinians broke out of Gilboa prison and, as of yet, have been able to evade recapture by Israeli forces, despite intense ongoing search efforts. Protests were held in the West Bank in solidarity with the escapees, which were brutally attacked with tear gas and rubber-coated steel bullets.

PLUS: Multiple Congresspeople agree to work a day as a farm worker in the United Farm Workers TakeOurJobs campaign

“A report just came out a few days ago that 125 villagers in the Amhara region were mascaraed by the TPLF forces and that didn’t receive any coverage in the mainstream media.”@RaniaKhalek

“We have to remember that there’s a cottage industry of paid performers who make their careers off of being a North Korean defector who goes around and say what these pro-war think tanks and media outlets want to hear.” @RaniaKhalek

“Political prisoners affect all aspect of Palestinian society, nearly 40% of Palestinian men in the West Bank and Jerusalem have spent time in Israeli detention.”@RaniaKhalek

“According to @SamidounPP  – There are currently 4,650 Palestinian prisoners in Israeli jails including 520 jailed without charge or trial under what is called “administrative detention.” 40 women prisoners and 200 child prisoners.”@RaniaKhalek

Is The Guinean Coup A Pro-French Power Grab Against A Russian-Friendly Leader?