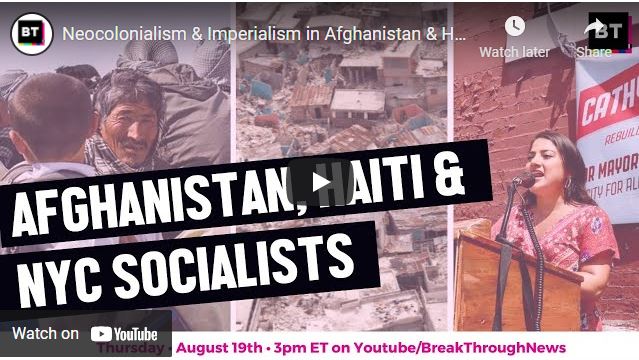 The US has admitted its defeat after two decades of imperialist war in Afghanistan. Why did the US really go to war there? Why did they stay for 20 years? And how did the prior years of US intervention set Afghanistan up for this exact moment? The Freedom Side is joined by war veteran Mike Prysner turned anti-imperialist activist, who is also producer for The Empire Files & co-host of the podcast Eyes Left.

Haiti is struggling under the blow of another huge earthquake, with more than ten thousand Haitains dead or injured. But repairs hadn’t even been finished from the 2010 earthquake. How has neocolonialism set up the Haitian people for these horrendous conditions? Haitian-born Black Alliance for Peace Haiti/Americas Coordinator & Associate Professor of African American Studies and Anthropology at UCLA Dr. Jemima Pierre explains.

Deaundre Phillips was murdered by Atlanta Police Officer Yasin Abdulahad, yet the local DA won’t prosecute. Meanwhile, Atlanta wants to build a new police training center to attract even more officers. And they want to tear down a green urban forest to do it. Kamau Franklin, organizer with Community Movement Builders, co-host of the podcast Renegade Culture & longtime activist, and Monica Johnson, Atlanta organizer against police terror with the Party for Socialism & Liberation, join the show.

PLUS: an interview with the socialist candidate in the New York City mayoral race: Cathy Rojas

“There’s a reason that 95% of the White House Press are horrified by the U.S. not being in a country anymore. To get a job in corporate media or mainstream outlets you have to be pro-war and if you’re not you have to shut up about it.”@RaniaKhalek

“Lebanon is kind of a glimpse into the future of what happens when you let capitalism decay everything. I am sitting in the epicenter of the results of that right now, in the results of complete neoliberal rot and decay.” @RaniaKhalek

“Lebanon is not a sovereign country, it’s sovereignty is violated everyday by these western embassies. The US embassy is not a normal diplomatic mission, they do nothing but meddle in Lebanese affairs to force things in their direction.” @RaniaKhalek

“Lebanon is essentially under an unofficial siege. Lebanon is not isolated from the events in the region or it’s neighbors like Syria which is under some of the most crippling sanctions in the world at the moment. ” @RaniaKhalek