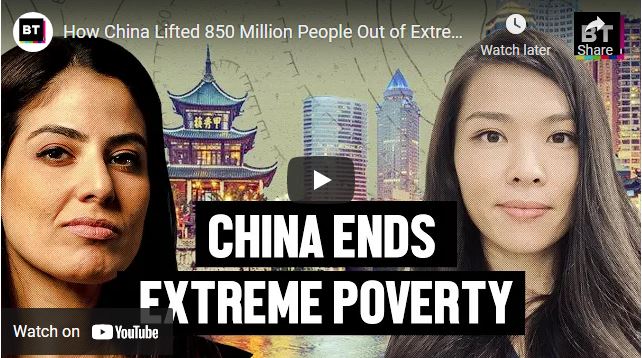 In February, the Chinese government celebrated the eradication of extreme poverty within its borders. This would be a massive achievement for any country, but for China it’s even more so as it is home to some 1.4 billion people and is considered a developing country. China is credited with lifting over 800 million people out of poverty, which accounts for 70 percent of the world’s total poverty reduction. This is an incredible feat and it’s worth understanding how China did it.

To discuss this and more, Rania Khalek was joined by Tings Chak, a researcher at the Tricontinental Institute, a member of Dongsheng News collective and lead author of the report “Serve the People: The Eradication of Extreme Poverty in China.”

0:00 Intro
2:19 Definition of extreme poverty and what it means to be lifted out of it
5:50 The numbers
7:19 The role of Chinese Communist Party members in eradicating extreme poverty
14:08 Geographic cooperation and mobilizing industry for poverty alleviation
20:35 China’s harsh regulations on billionaires and big tech
26:32 How the “century of humiliation” plunged China into extreme poverty
35:52 China’s history of famines and responding to criticism of Mao’s agricultural policies
41:00 The reform and opening up period in 1979
45:45 Is China a socialist country?
49:08 China’s economic relationship with the Global South vs the West
54:45 Removing imbalances between rich and poor
59:10 Are we undercounting poverty around the world?
1:05:36 Why was China so successful at containing Covid-19?
1:09:09 US vs China as individualism vs collectivism and what it means with regard to the pandemic
1:15:49 Where you can follow Tings’ work