Fog of War over Ukraine 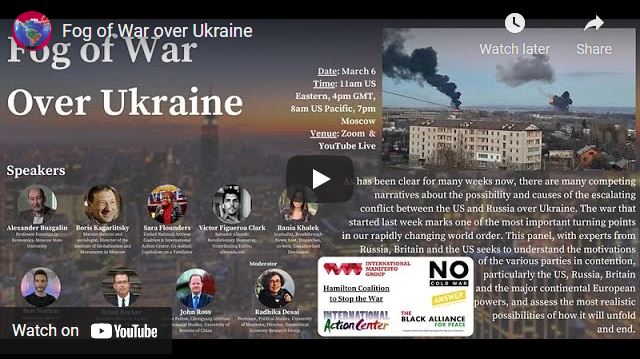 As has been clear for many weeks now, there are many competing narratives about the possibility and causes of the escalating conflict between the US and Russia over Ukraine. The war that started last week marks one of the most important turning points in our rapidly changing world order.

This event is organized by the International Manifesto Group. Co-sponsors include The Answer Coalition, International Action Centre, Black Alliance for Peace, No Cold War and the Hamilton Coalition to Stop the War.

Rania Khalek spoke at a webinar entitled The Fog of War over Ukraine, held March 6, 2022. A panel of experts analyzed the causes, interests and consequences of Russia’s military operations in Ukraine.

Hillary Clinton Wants a Repeat of Afghanistan-Style Insurgency in Ukraine

Ukraine Is A Sacrificial Pawn On The Imperial Chessboard

0 thoughts on “Fog of War over Ukraine”