HOME / Multimedia / 10 Years of South Sudan: How the West Created A Predatory Regime 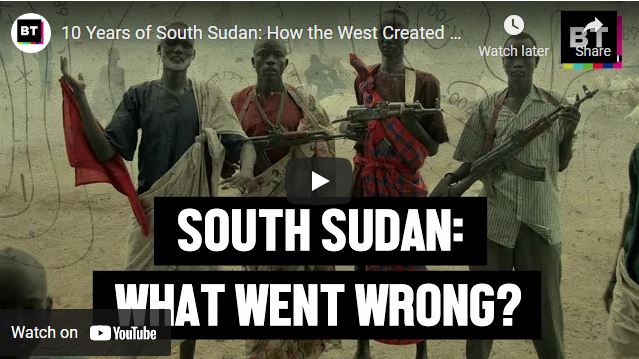 July 9th marked the 10th anniversary of the creation of South Sudan. The US State Department lamented that the young country has “seen much suffering” and “the promise of peace and prosperity that independence represented remains unfulfilled.”

To help us understand why the optimism of the West and South Sudanese in 2011 remains unfulfilled, Rania Khalek was joined by Joshua Craze, an anthropologist who spent many years researching in South Sudan and has taught in various universities. He’s also a research fellow at the London School of Economics.

1:33 How South Sudan came to be a country
6:37 Was there another way to solve the conflict without severing the south from Sudan?
10:03 Why did the creation of South Sudan seemingly lead to more conflict, not less?
15:51 What is the Troika of the US, UK and Norway and why do these countries have a privileged status?
20:19 How the international community made things worse
25:56 When international officials believe their own lies, stability remains elusive
30:55 South Sudan as a neoliberal testing laboratory of state formation
34:25 South Sudan’s massive wealth transfer to a militarized elite
37:39 How war serves institutions like the World Bank
41:05 Who is responsible for this disaster?
45:09 International community’s motives
50:57 The logic behind brutality of militia violence
56:16 Corruption of international elites and white saviours
1:02:38 How the War on Terror impacted the creation of South Sudan
1:08:24 The significance of oil
1:14:34 Impact of the revolution in Sudan on South Sudan

0 thoughts on “10 Years of South Sudan: How the West Created A Predatory Regime”