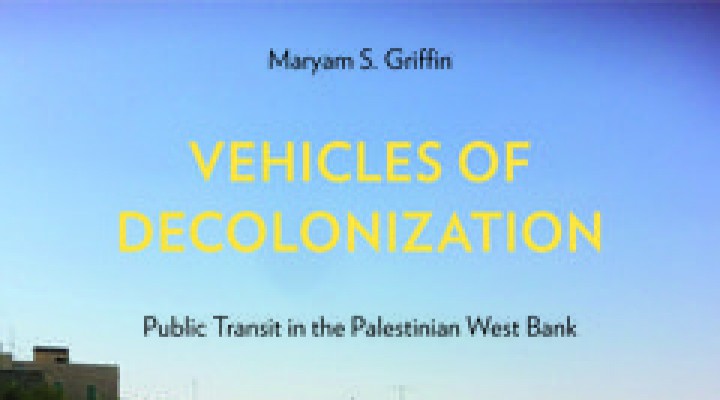 A prominent part of Israel’s colonial violence is the deprivation of free movement for Palestinians. Maryam S. Griffin’s book, Vehicles of Decolonisation: Public Transport in the Palestinian West Bank (Temple University Press, 2022), provides details of the ways in which Israel collectively denies mobility for Palestinians and how, as a result, Palestinian public transportation becomes “a site of social struggle.” Griffin’s writing contextualises the ramifications of public transportation for Palestinians from within Israel’s colonial framework, thus setting the scene for readers to engage with a political reality that is either denied or obfuscated.

“Public transport is severely affected by the policies and practices of Israeli settler colonialism,” the author asserts in the introduction. Giving an overview of how Israel’s colonial project affects Palestinian public transportation – the low vehicle ownership in the West Bank, the Palestinian Authority’s monopoly over public transportation despite the system being a public-private partnership service, as well as the various means Israel applies to prevent Palestinian mobility – she notes that limiting movement for Palestinians is also tied to their systematic forced displacement by Israel.

Of particular note are Griffin’s meticulous references to Israel’s settler colonialism and subsequent military occupation. The 1967 occupation, she writes, is “an extension of the broader Israeli settler colonial project.” Clarifying this point early on in the book is not only empowering for the Palestinian narrative, given that the occupation has become interchangeable with colonialism and thus adds to Israeli impunity, but it also increases context for the reader when the author discusses how annexation, for example, which is also tied to the colonial expansion project. Israel extends the frontiers of its violence, but the framework remains constant.

This book is on the shortlist for the Palestine Book Awards 2022, please click here to read the full review on the Palestine book awards site.

0 thoughts on “Vehicles of Decolonisation: Public Transit in the Palestinian West Bank”