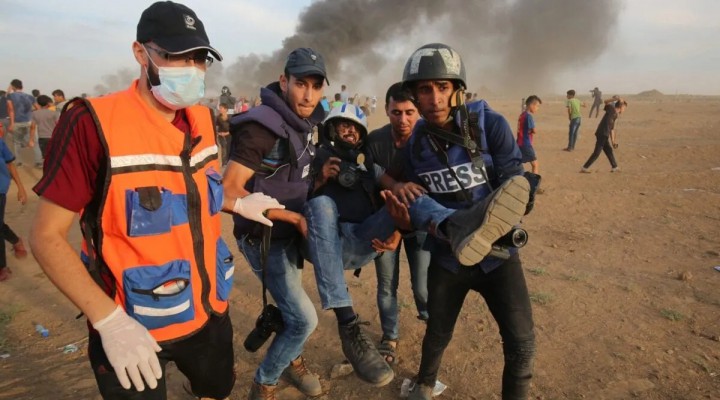 When the UN does nothing but perfunctory duties, human rights and civil society organisations are brought to full stop; a dead end. Earlier this week, the Palestinian Centre for Development and Media Freedoms (MADA) called upon the international community to adopt the UN Security Council Resolution 2222, agreed in 2015, with regard to the violations faced by Palestinian journalists at the hands of the Israeli military.

Attacks against Palestinian journalists increased in February this year, with 46 violations, up 19 on the 27 violations in January. Thirty-nine of the February violations were committed by Israeli soldiers, while the Palestinian Authority’s security services were responsible for four. The remaining three were attributed to social media.

In 2021, Israeli targeted over 260 Palestinian journalists in the occupied West Bank and East Jerusalem. To these must be added the 13 targeted in the Gaza Strip in May, when Israel embarked upon another aerial bombardment of the enclave and Palestinians united against the planned forced displacement of Sheikh Jarrah’s residents in occupied Jerusalem.

Last January, 20 members of the European Parliament signed a petition demanding freedom of movement for Palestinian journalists, based on a report by Euro-Med Monitor which detailed the Israeli government’s restrictions on freedom of movement as a means of coercion, alongside travel bans, administrative detention and violent interrogation. “Such measures pose a serious threat to the independence of Palestinian journalism and to freedom of speech and expression in the occupied Palestinian territories,” the petition pointed out.

MADA’s call for international intervention, even if based on a UN Security Council resolution, is likely to find no collective international support. The European Parliament could have exerted some influence if many more of its 750+ members had signed the petition, but only 20 chose to do so. Similarly, the UN’s alleged support for Palestinian rights does not stretch beyond resolutions and statements; acting upon its rhetoric would unravel, first and foremost, the unspoken complicity which the international community has built with Israel.

Far from offering a human rights platform to civil society and human rights organisations, the UN has created a permanent fiasco whereby the downtrodden and their interlocutors have to plead for protection. Such organisations should not be burdened with the responsibility of reminding the international community that it should be acting according to international law. Yet the UN’s structure is such that it protects those responsible for violence in order to appease the powerful states that fund and rule the organisation. Adopting resolutions means nothing when implementation is disregarded, and diplomats, in this case, disengage themselves from the actual repercussions of the persecution of journalists.

When it comes to Israel, the additional refusal to look at the attacks on journalists as part of its colonial violence removes all context, and the UN faces scant counterarguments by human rights organisations, adding to the normalisation of Israel’s violations. In such contexts, and with Israel remaining undefined in terms of the Nakba it forced upon Palestinians, what protection can the UN possible offer when it has already categorised Palestinians as part of an irritating but disposable project? It offers Palestinians no protection per se, let alone journalists.

0 thoughts on “The UN offers no protection to Palestinians per se, let alone journalists”