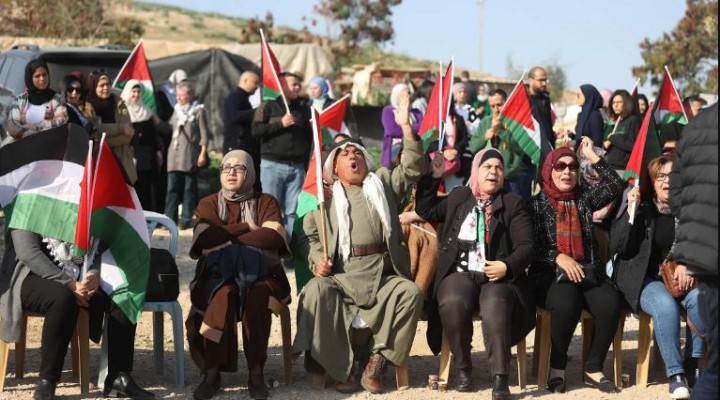 The former Israeli ambassador to the UN, Danny Danon, has told a Likud faction meeting that “illegal Palestinian construction” in the occupied West Bank is “rampant”. He wasn’t being honest.

“Last Friday we made it clear that supporting settlements does not contradict upholding the law,” he claimed. “The defence minister received our backing. We expect the defence minister to act with the same determination in the face of rampant Palestinian illegal construction in the West Bank. We will no longer tolerate discrimination against the settlers.”

Israeli settlements and settlers are, of course, illegal under international law, something that Danon is adept at overlooking when he makes such outrageous claims.

As the Israeli government prepares to submit its response to the High Court over the impending demolition of the Palestinian Bedouin village of Khan Al-Ahmar, Danon and Likud MK Yuli Edelstein visited the village, calling for its demolition and accusing the government of selective enforcement over the evacuation of the Or Chaim illegal settler outpost in the occupied West Bank.

In an op-ed, Danon described the EU’s funding of infrastructure in Khan Al-Ahmar as “subversive involvement of international entities in Israel’s domestic affairs” and accused the bloc of violating Israel’s sovereignty and international law. “It is part of an ulterior agenda that seeks to delegitimise Israel’s historical claim to its own land,” Danon wrote.

Completely eliminating Israel’s colonial context and the fact that Khan Al-Ahmar is built on Israeli-occupied Palestinian land, Danon referred to the evacuation of Or Chaim and said, “The law is the law and must be applied to all citizens and communities, Jews and Arabs alike.” However, there is no equivalence between the coloniser and the colonised, as Danon knows well.

Khan al-Ahmar has attracted enough international attention to become newsworthy periodically, and the related activism has ensured that Israel’s violations are fully exposed. The village, though, is also part of a long colonial process that seeks to dispossess Palestinians of their land. Its demolition is not an isolated incident. Earlier expulsions and destruction of properties, including the ethnic cleansing from the 1948 Nakba onwards, need to be kept in mind.

Israel benefits from the international community’s differentiation of colonial settlement expansion. It has gained a veneer of legitimacy for the earlier colonial settlements despite the atrocities committed by Zionist paramilitary terror gangs to establish control over Palestinian territory. Israeli law is justifiable only unto itself and the violence it created. In terms of equality and rights, there is no justification for Israel’s colonial expansion. Likewise, there is no equivalence in calling for the demolition of Khan Al-Ahmar because an illegal (even under Israeli law) settlement outpost was dismantled. Palestinians are rarely issued building permits on what remains of their land. Danon’s use of the word “rampant” is totally dishonest. Indeed, his words only reflect his country’s colonial violence and privilege when calling for Khan Al-Ahmar’s destruction, not to mention targeting an integral part of Palestinian resilience in the face of impending demolition orders.

Lest Danon forgets, Khan Al-Ahmar’s residents relocated to the area after being displaced by Israel in 1950, laying bare the lie of delegitimising “Israel’s historical claim to its own land”. Israel wants territorial contiguity to Jerusalem, not demolitions based on equal rights. Erasing the Palestinian landscape through colonial settlement expansion does not erase the fact that Israel’s settler-colonial population cannot lay legitimate claims to Palestinian land, and neither can the Israeli government. The only claim that Israel can make with any degree of accuracy and honesty is that it colonised Palestine and intends to finalise its colonial enterprise. Khan Al-Ahmar stands in the way of its plans, just as other Palestinian towns and villages did decades ago. More than 500 paid the price and were totally destroyed and wiped off the map.

Ben Gvir’s efforts in the erasure of Palestinian identity

The Palestinian Authority’s privilege and freedom of movement

Netanyahu will Cry a Diversionary ‘Wolf’, but Will He be a Solo Aria?

Away from the rhetoric, where is European support for Palestine?