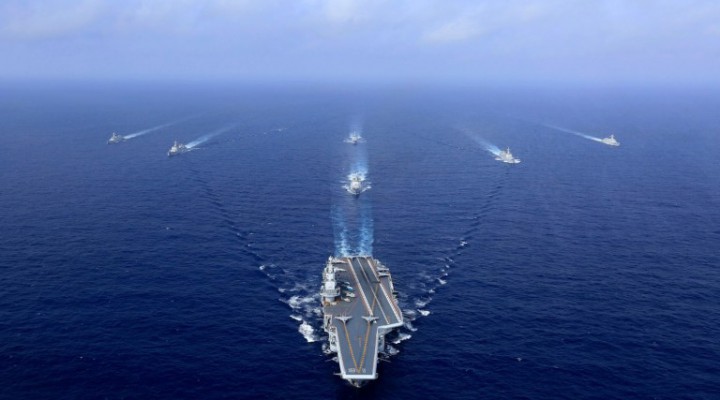 When the USS Ronald Reagan and USS Nimitz carrier strike groups recently engaged in “operations” in the South China Sea, it failed to escape cynics that the US Pacific Fleet was doing its best to turn the infantile Thucydides trap theory into a self-fulfilling prophecy.

The pro forma official spin, via Rear Admiral Jim Kirk, commander of the Nimitz, is that the ops were conducted to “reinforce our commitment to a free and open Indo-Pacific, a rules-based international order, and to our allies and partners.”

Nobody pays attention to these clichés, because the real message was delivered by a CIA operative posing as diplomat, Secretary of State Mike “We Lie, We Cheat, We Steal” Pompeo. “The PRC has no legal grounds to unilaterally impose its will on the region,” he proclaimed, in a reference to the nine-dash line that lays claim to most of the disputed sea.

Once again, nobody paid attention, because the actual facts on the sea are stark. Anything that moves in the South China Sea – China’s crucial maritime trade artery – is at the mercy of the PLA, which decides if and when to deploy their deadly DF-21D and DF-26 “carrier killer” missiles.

There’s absolutely no way the US Pacific Fleet can win a shooting war in the South China Sea.

A crucial Chinese report, unavailable and not referred to by Western media, and translated by Hong Kong-based analyst Thomas Wing Polin, is essential to understand the context.

The report refers to US Growler electronic warplanes rendered totally out of control by electronic jamming devices positioned on islands and reefs in the South China Sea.

According to the report, “after the accident, the United States negotiated with China, demanding that China dismantle the electronic equipment immediately, but it was rejected. These electronic devices are an important part of China’s maritime defense and are not offensive weapons. Therefore, the US military’s request for dismantling is unreasonable.”

“On the same day, former commander Scott Swift of the US Pacific Fleet finally acknowledged that the US military had lost the best time to control the South China Sea. He believes that China has deployed a large number of Hongqi 9 air defense missiles, H-6K bombers, and electronic jamming systems on islands and reefs. The defense can be said to be solid. If US fighter jets rush into the South China Sea, they are likely to encounter their ‘Waterloo.’”

The bottom line is that the systems – including electronic jamming – deployed by the PLA on islands and reefs in the South China Sea, covering more than half of the total surface, are considered by Beijing to be part of the national defense system.

I have previously detailed what Admiral Philip Davidson, when he was still a nominee to lead the US Pacific Command (PACOM), told the US Senate. Here are his Top Three conclusions:

1) “China is pursuing advanced capabilities (e.g., hypersonic missiles) which the United States has no current defense against. As China pursues these advanced weapons systems, US forces across the Indo-Pacific will be placed increasingly at risk.”

3) “China is now capable of controlling the South China Sea in all scenarios short of war with the United States.”

Implied in all of the above is the “secret” of the Indo-Pacific strategy: at best a containment exercise, as China continues to solidify the Maritime Silk Road linking the South China Sea to the Indian Ocean.

The South China Sea is and will continue to be one of the prime geopolitical flashpoints of the young 21st century, where a great deal of the East-West balance of power will be played.

I have addressed this elsewhere in the past in some detail, but a short historical background is once again absolutely essential to understand the current juncture as the South China Sea increasingly looks and feels like a Chinese lake.

Let’s start in 1890, when Alfred Mahan, then president of the US Naval College, wrote the seminal The Influence of Sea Power Upon History, 1660-1783. Mahan’s central thesis is that the US should go global in search of new markets, and protect these new trade routes through a network of naval bases.

That is the embryo of the US Empire of Bases – which remains in effect.

It was Western – American and European – colonialism that came up with most land borders and maritime borders of states bordering the South China Sea: Philippines, Indonesia, Malaysia, Vietnam.

We are talking about borders between different colonial possessions – and that implied intractable problems from the start, subsequently inherited by post-colonial nations.

Historically, it had always been a completely different story. The best anthropological studies (Bill Solheim’s, for instance) define the semi-nomadic communities who really traveled and traded across the South China Sea from time immemorial as the Nusantao – an Austronesian compound word for “south island” and “people”.

The Nusantao were not a defined ethnic group. They were a maritime internet. Over centuries, they had many key hubs, from the coastline between central Vietnam and Hong Kong all the way to the Mekong Delta. They were not attached to any “state”. The Western notion of “borders” did not even exist. In the mid-1990s, I had the privilege to encounter some of their descendants in Indonesia and Vietnam.

So it was only by the late 19th century that the Westphalian system managed to freeze the South China Sea inside an immovable framework.

Which brings us to the crucial point of why China is so sensitive about its borders; because they are directly linked to the “century of humiliation” – when internal Chinese corruption and weakness allowed Western “barbarians” to take possession of Chinese land.

The Nine Dash Line is an immensely complex problem. It was invented by the eminent Chinese geographer Bai Meichu, a fierce nationalist, in 1936, initially as part of a “Chinese National Humiliation Map” in the form of a “U-shaped line” gobbling up the South China Sea all the way down to James Shoal, which is 1,500 km south of China but only over 100 km off Borneo.

The Nine Dash Line, from the beginning, was promoted by the Chinese government – remember, at the time not yet Communist – as the letter of the law in terms of “historic” Chinese claims over islands in the South China Sea.

One year later, Japan invaded China. Japan had occupied Taiwan way back in 1895. Japan occupied the Philippines in 1942. That meant virtually the entire coastline of the South China Sea being controlled by a single empire for the fist time in history. The South China Sea had become a Japanese lake.

Well, that lasted only until 1945. The Japanese did occupy Woody Island in the Paracels and Itu Aba (today Taiping) in the Spratlys. After the end of WWII and the US nuclear-bombing Japan, the Philippines became independent in 1946 and the Spratlys immediately were declared Filipino territory.

In 1947, all the islands in the South China Sea got Chinese names.

And in December 1947 all the islands were placed under the control of Hainan (itself an island in southern China.) New maps duly followed, but now with Chinese names for the islands (or reefs, or shoals). But there was a huge problem: no one explained the meaning of those dashes (which were originally eleven.)

In June 1947 the Republic of China claimed everything within the line – while proclaiming itself open to negotiate definitive maritime borders with other nations later on. But, for the moment, there were no borders.

And that set the scene for the immensely complicated “strategic ambiguity” of the South China Sea that still lingers on – and allows the State Dept. to accuse Beijing of “gangster tactics”. The culmination of a millennia-old transition from the “maritime internet” of semi-nomadic peoples to the Westphalian system spelled nothing but trouble.

So what about the US notion of “freedom of navigation”?

In imperial terms, “freedom of navigation”, from the West Coast of the US to Asia – through the Pacific, the South China Sea, the Malacca Strait and the Indian Ocean – is strictly an issue of military strategy.

The US Navy simply cannot imagine dealing with maritime exclusion zones – or having to demand an “authorization” every time they need to cross them. In this case the Empire of Bases would lose “access” to its own bases.

This is compounded with trademark Pentagon paranoia, gaming a situation where a “hostile power” – namely China – decides to block global trade. The premise in itself is ludicrous, because the South China Sea is the premier, vital maritime artery for China’s globalized economy.

So there’s no rational justification for a Freedom of Navigation (FON) program. For all practical purposes, these aircraft carriers like the Ronald Reagan and the Nimitz showboating on and off in the South China Sea amount to 21st century gunboat diplomacy. And Beijing is not impressed.

As far as the 10-member Association of Southeast Asian Nations (ASEAN) is concerned, what matters now is to come up with a Code of Conduct (COC) to solve all maritime conflicts between Philippines, Vietnam, Malaysia, Brunei and China.

Next year, ASEAN and China celebrate 30 years of strong bilateral relations. There’s a strong possibility they will be upgraded to “comprehensive strategic partner” status.

Because of Covid-19, all players had to postpone negotiations on the second reading of the single draft of COC. Beijing wanted these to be face to face – because the document is ultra-sensitive and for the moment, secret. Yet they finally agreed to negotiate online – via detailed texts.

It will be a hard slog, because as ASEAN made it clear in a virtual summit in late June, everything has to be in accordance with international law, including the UN Convention on the Law of the Seas (UNCLOS).

If they can all agree on a COC by the end of 2020, a final agreement could be approved by ASEAN in mid-2021. Historic does not even begin to describe it – because this negotiation has been going on for no less than two decades.

Not to mention that a COC invalidates any US pretension to secure “freedom of navigation” in an area where navigation is already free.

Yet “freedom” was never the issue. In imperial terminology, “freedom” means that China must obey and keep the South China Sea open to the US Navy. Well, that’s possible, but you gotta behave. That’ll be the day when the US Navy is “denied” the South China Sea. You don’t need to be Mahan to know that’ll mean the imperial end of ruling the seven seas.