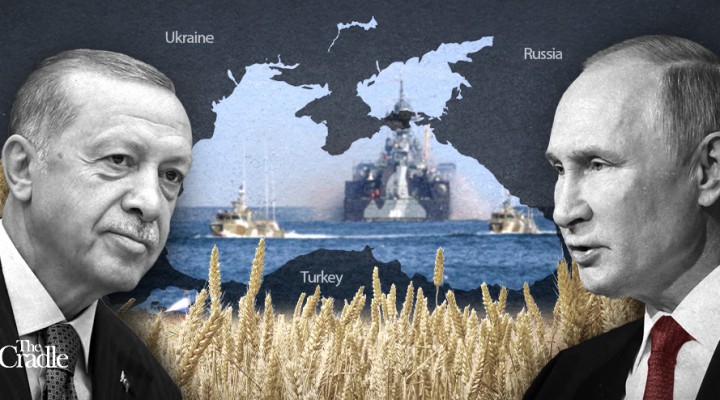 After the western military attack on Sevastopol briefly halted Russian grain transports, Moscow is back in business with a stronger hand and more favorable terms.

So, Turkish President Recep Tayyip Erdogan picks up the phone and calls his Russian counterpart Vladimir Putin: let’s talk about the “grain deal.” Putin, cool, calm and collected, explains the facts to the Sultan:

First, the reason why Russia withdrew from the export grain deal.

Second, how Moscow seeks a serious investigation into the – terrorist – attack on the Black Sea fleet, which for all practical purposes seems to have violated the deal.

And third, how Kiev must guarantee it will uphold the deal, brokered by Turkey and the UN.

Only then would Russia consider coming back to the table.

And then – today, 2 November – the coup de theatre: Russia’s Ministry of Defense (MoD) announces the country is back to the Black Sea grain deal, after receiving the necessary written guarantees from Kiev.

The MoD, quite diplomatically, praised the “efforts” of both Turkey and the UN: Kiev is committed not to use the “Maritime Humanitarian Corridor” for combat operations, and only in accordance with the provisions of the Black Sea Initiative.

Moscow said the guarantees are sufficient “for the time being.” Implying that can always change.

All rise to the Sultan’s persuasion

Erdogan must have been extremely persuasive with Kiev. Before the phone call to Putin, the Russian Ministry of Defense (MoD) had already explained that the attack on the Black Sea Fleet was conducted by 9 aerial drones and 7 naval drones, plus an American RQ-4B Global Hawk observation drone lurking in the sky over neutral waters.

The attack happened under the cover of civilian ships and targeted Russian vessels that escorted the grain corridor in the perimeter of their responsibility, as well as the infrastructure of the Russian base in Sevastopol.

The MoD explicitly designated British experts deployed in the Ochakov base in the Nikolaev region as the designers of this military operation.

At the UN Security Council, Permanent Representative Vassily Nebenzya declared himself “surprised” that the UN leadership “failed not only to condemn, but even to express concern over the terrorist attacks.”

After stating that the Brit-organized Kiev operation on the Black Sea Fleet “put an end to the humanitarian dimension of the Istanbul agreements,” Nebenzya also clarified:

“It is our understanding that the Black Sea Grain Initiative, which Russia, Turkey, and Ukraine agreed on under UN supervision on 22 July, must not be implemented without Russia, and so we do not view the decisions that were made without our involvement as binding.”

This means, in practice, that Moscow “cannot allow for unimpeded passage of vessels without our inspection.” The crucial question is how and where these inspections will be carried out – as Russia has warned the UN that it will definitely inspect dry cargo ships in the Black Sea.

The UN, for its part, tried at best to put on a brave face, believing Russia’s suspension is “temporary” and looking forward to welcoming “its highly professional team” back to the Joint Coordination Center.

According to humanitarian chief Martin Griffiths, the UN also proclaims to be “ready to address concerns.” And that has to be soon, because the deal reaches its 120-day extension point on November 19.

Well, “addressing concerns” is not exactly the case. Deputy Permanent Representative of Russia Dmitry Polyansky said that at the UN Security Council meeting western nations simply could not deny their involvement in the Sevastopol attack; instead, they simply blamed Russia.

All the way to Odessa

Prior to the phone call with Erdogan, Putin had already pointed out that “34 percent of the grain exported under the deal goes to Turkey, 35 percent to EU countries and only 3-4 percent to the poorest countries. Is this what we did everything for?”

Putin made it very clear that Moscow was not withdrawing from the grain deal but had only suspended its participation.

And as a further gesture of good will, Moscow announced it would willingly ship 500,000 tons of grain to poorer nations for free, in an effort to replace the integral amount that Ukraine should have been able to export.

All this time, Erdogan skillfully maneuvered to convey the impression he was occupying the higher ground: even if Russia behaves in an “indecisive” manner, as he defined it, we will continue to pursue the grain deal.

So, it seems like Moscow was being tested – by the UN and by Ankara, which happens to be the main beneficiary of the grain deal and is clearly profiting from this economic corridor. Ships continue to depart from Odessa to Turkish ports – mainly Istanbul – without Moscow’s agreement. It was expected they would be “filtered” by Russia when coming back to Odessa.

The immediate Russian means of pressure was unleashed in no time: preventing Odessa from becoming a terrorist infrastructure node. This means constant visits by cruise missiles.

Well, the Russians have already “visited” the Ochakov base occupied by Kiev and the British experts. Ochakov – between Nikolaev and Odessa – was built way back in 2017, with key American input.

The British units that were involved in the sabotage of the Nord Streams – according to Moscow – are the same ones that planned the Sevastopol operation. Ochakov is constantly spied upon and sometimes hit out of positions that the Russians have cleared last month only 8 km to the south, on the extremity of the Kinburn peninsula. And yet the base has not been totally destroyed.

To reinforce the “message,” the real response to the attack on Sevastopol has been this week’s relentless “visits” of Ukraine’s electrical infrastructure; if maintained, virtually the whole of Ukraine will soon be plunged into darkness.

Closing down the Black Sea

The attack on Sevastopol may have been the catalyst leading to a Russian move to close down the Black Sea – with Odessa converted into an absolutely priority for the Russian Army. There are serious rumblings across Russia on why Russophone Odessa had not been the object of pinpointed targeting before.

Top infrastructure for Ukrainian Special Forces and British advisers is based in Odessa and Nikolaev. Now there’s no question these will be destroyed.

Even with the grain deal in theory back on track, it is hopeless to expect Kiev to abide by any agreements. After all, every major decision is taken either by Washington or by the Brits at NATO. Just like bombing the Crimea Bridge, and then the Nord Streams, attacking the Black Sea Fleet was designed as a serious provocation.

The brilliant designers though seem to have IQs lower than refrigerator temperatures: every Russian response always plunges Ukraine deeper down an inescapable – and now literally black – hole.

The grain deal seemed to be a sort of win-win. Kiev would not contaminate Black Sea ports again after they were demined. Turkey turned into a grain transport hub for the poorest nations (actually that’s not what happened: the main beneficiary was the EU). And sanctions on Russia were eased on the export of agricultural products and fertilizers.

This was, in principle, a boost for Russian exports. In the end, it did not work out because many players were worried about possible secondary sanctions.

The corridor for the grain carriers is only 2 km wide. Minesweepers move in parallel along the corridor. Ships are inspected by Ankara. So the Kiev-Ankara-UN deal remains in place. It has nothing to do with Russia – which in this case does not escort and/or inspect the cargoes.

So in this respect, it is a game-changer.

Seems like Erdogan fully understood the stakes, and told Kiev in no uncertain terms to behave. There’s no guarantee, though, that western powers won’t come up with another Black Sea provocation. Which means that sooner or later – perhaps by the Spring of 2023 – General Armageddon will have to come up with the goods. That translates as advancing all the way to Odessa.

0 thoughts on “No pain, no grain: Putin’s Black Sea comeback”