HOME / WORLD / From the Black Sea to the East Med, don’t poke The Russian Bear 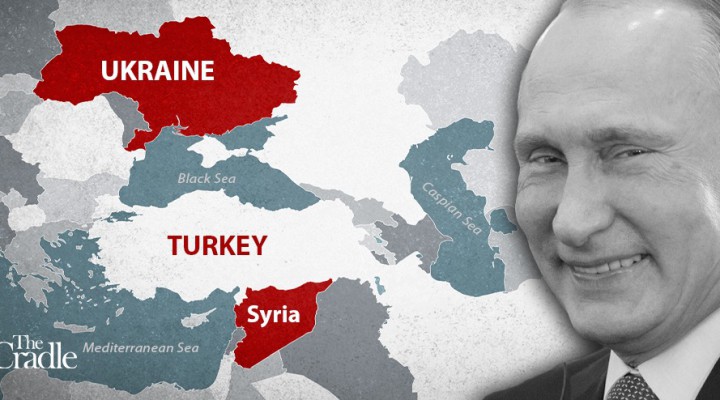 The US shouldn’t have poked the Russian Bear. Now it is fully awake: after Ukraine, the Russians are likely to do a clean sweep of foreign belligerents poking around the East Med and the Black Sea.

This is what happens when a bunch of ragged hyenas, jackals and tiny rodents poke The Bear: a new geopolitical order is born at breathtaking speed.

From a dramatic meeting of the Russian Security Council to a UN history lesson delivered by Russian President Vladimir Putin and the subsequent birth of the Baby Twins – the People’s Republics of Donetsk and Luhansk – all the way to the breakaway republics’ appeal to Putin to intervene militarily to expel the NATO-backed Ukrainian bombing-and-shelling forces from Donbass, it was a seamless process, executed at warp speed.

The (nuclear) straw that (nearly) broke the Bear’s back – and forced it to pounce – was Comedian/Ukrainian President Volodymy Zelensky, back from the Russophobia-drenched Munich Security Conference where he was hailed like a Messiah, saying that the 1994 Budapest memorandum should be revised and Ukraine should be nuclear-rearmed.

That would be the equivalent of a nuclear Mexico south of the Hegemon.

Putin immediately turned Responsibility to Protect (R2P) upside down: an American construct invented to launch wars was retrofitted to stop a slow-motion genocide in Donbass.

First came the recognition of the Baby Twins – Putin’s most important foreign policy decision since inserting Russian jets into Syria’s airspace in 2015. That was the preamble for the next game-changer: a “special military operation…aimed at demilitarization and denazification of Ukraine,” as Putin defined it.

Up to the last minute, the Kremlin was trying to rely on diplomacy, explaining to Kiev the necessary imperatives to prevent heavy metal thunder: recognition of Crimea as Russian; abandoning any plans to join NATO; negotiating directly with the Baby Twins – an anathema for the Americans since 2015; finally, demilitarizing and declaring Ukraine as neutral.

Kiev’s handlers, predictably, would never accept the package – as they didn’t accept the Master Package that really matters, which is the Russian demand for “indivisible security.”

The sequence, then, became inevitable. In a flash, all Ukrainian military forces between the so-called line of contact and the original borders of Donetsk and Luhansk oblasts were re-framed as an occupying army in Russian-allied territories that Moscow had just sworn to protect.

Get Out – Or Else

The Kremlin and the Russian Ministry of Defense were not bluffing. Timed to the end of Putin’s speech announcing the operation, the Russians decapitated with precision missiles everything that mattered in terms of the Ukrainian military in just one hour: Air force, navy, airfields, bridges, command and control centers, the whole Turkish Bayraktar drone fleet.

And it was not only Russian raw power. It was the Donetsk People’s Republic (DPR) artillery that hit the Armed Forces of Ukraine headquarters in Donbass, which actually housed the entire Ukrainian military command. This means that the Ukrainian General Staff instantly lost control of all its troops.

This was Shock and Awe against Iraq, 19 years ago, in reverse: not for conquest, not as a prelude for an invasion and occupation. The political-military leadership in Kiev did not even have time to declare war. They froze. Demoralized troops started deserting. Total defeat – in one hour.

The water supply to Crimea was instantly re-established. Humanitarian corridors were set up for the deserters. Ukrainian forces remnants now include mostly surviving Azov batallion Nazis, mercenaries trained by the usual Blackwater/Academi suspects, and a bunch of Salafi-jihadis.

Predictably, western corporate media has already gone totally berserk, branding it as the much-awaited Russian ‘invasion.’ A reminder: when Israel routinely bombs Syria and when the House of One Saudi routinely bombs Yemeni civilians, there is never any peep in NATO’s media.

As it stands, realpolitik spells out a possible endgame, as voiced by Donetsk’s head, Denis Pushilin: “The special operation in Donbass will soon be over and all the cities will be liberated.”

We could soon witness the birth of an independent Novorossiya – east of the Dnieper, south along Sea of Azov/Black Sea, the way it was when attached to Ukraine by Lenin in 1922. But now it would be totally aligned with Russia, and providing a land bridge to Transnistria.

Ukraine, of course, would lose any access to the Black Sea. History loves playing tricks: what was a ‘gift’ to Ukraine in 1922 may become a parting gift a hundred years later.

It will be fascinating to watch what Prof. Sergey Karaganov masterfully described, in detail, as the new Putin doctrine of constructive destruction, and how it will interconnect with West Asia, the Eastern Mediterranean and further on down the Global South road.

Turkish President Recep Tayyip Erdogan, the ceremonial NATO Sultan, denounced the recognition of the Baby Twins as “unacceptable.” No wonder: that shift smashed all his elaborate plans to pose as privileged mediator between Moscow and Kiev during Putin’s upcoming visit to Ankara. The Kremlin – as well as the Foreign Ministry – don’t waste time talking to NATO minions.

Russian Foreign Minister Sergey Lavrov, for his part, had a recent, very productive entente with Syrian Foreign Minister Faisal Mekdad. Russia, this past weekend, has staged a spectacular strategic missile display, hypersonic and otherwise, featuring Khinzal, Zircon, Kalibr, Yars ICBMs, Iskander and Sineva  – irony of ironies, in synch with the Russophobia-fest in Munich. In parallel, Russian Navy ships of the Pacific, Northern and Black Sea fleets performed a series of submarine search drills in the Mediterranean.

The Putin doctrine privileges the asymmetrical – and that applies to the near abroad and beyond. Putin’s body language, in his last two crucial interventions, spell out nearly maximum exasperation. As in realizing, not auspiciously, but rather in resignation, that the only language Beltway Neo-conservatives and ‘humanitarian imperialists’ understand is heavy metal thunder. They are definitely deaf, dumb and blind to history, geography and diplomacy.

So, one can always game the Russian military – for instance, imposing a no-fly zone in Syria to conduct a series of visits by Mr. Khinzal not only to the Turk-protected shady jihadist umbrella in Idlib but also the jihadists protected by the Americans in Al-Tanf base, near the Syria-Jordan border. After all, these specimens are all NATO proxies.

The US government barks non-stop about “territorial sovereignty.” So let’s game the Kremlin asking the White House for a road map on getting out of Syria: after all the Americans are illegally occupying a section of Syrian territory and adding extra disaster to the Syrian economy by stealing their oil.

NATO’s stultifying leader, Jens Stoltenberg, has announced the alliance is dusting off its “defense plans.” That may include little more than hiding behind their expensive Brussels desks. They are as inconsequential in the Black Sea as in the East Med – as the US remains quite vulnerable in Syria.

There are now four Russian TU-22M3 strategic bombers in Russia’s Hmeimim base in Syria, each capable of carrying three S-32 anti-ship missiles that fly at supersonic Mach 4.3 with a range of 1,000 km. No Aegis system is able to handle them.

Russia also has stationed a few Mig-31Ks in Syria’s coastal region in Latakia equipped with hypersonic Khinzals – more than enough to sink any kind of US surface group, including aircraft carriers, in the East Med. The US has no air defense mechanism whatsoever with even a minimal chance of intercepting them.

So the rules have changed. Drastically. The Hegemon is naked. The new deal starts with turning the post-Cold War set-up in Eastern Europe completely upside down. The East Med will be next. The Bear is back, hear him roar.

The News Headlines Tell All

0 thoughts on “From the Black Sea to the East Med, don’t poke The Russian Bear”