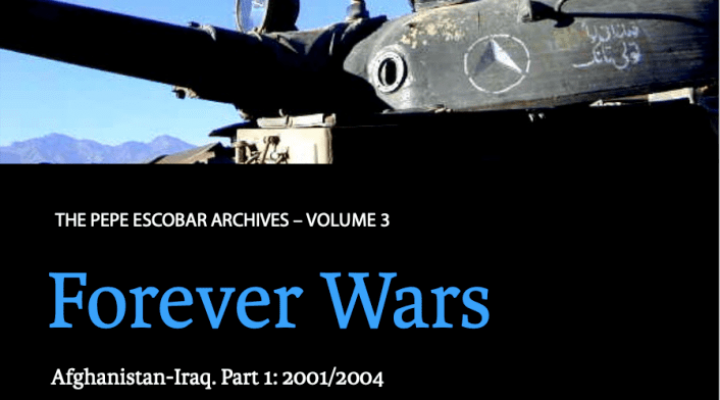 I have the pleasure to welcome you to the third in a series of e-books recovering the Pepe Escobar archives on Asia Times.

The archives track a period of 20 years – starting with the columns and stories published under The Roving Eye sign in the previous Asia Times Online from 2001 all the way to early 2015.

The second tracked the Islamic Republic of Iran throughout the “axis of evil” era, the Ahmadinejad years, the nuclear deal, and “maximum pressure” im- posed by the Trump administration.

This one closely tracks the Forever Wars in Afghani- stan, and Iraq, starting one month before 9/11 in the heart of Afghanistan.

The unifying idea behind this e-book series is to recover the excitement of what is written as “the first draft of History”.

Once again, you may read the whole compilation chronologically, as a thriller, following in detail all the plot twists and cliffhangers.

You will find the last interview by commander Masoud before he was killed two days before 9/11; the expansion of jihad as a “thermonuclear bomb”; life in “liberated” Kabul; life in Iraq in the last year under Saddam Hussein; on the trail of al-Qaeda in the Afghan badlands; who brought us the war on Iraq; the Fallujah tragedy; what went wrong – from Kabul to Helmand and from Baghdad to the “triangle of death”; the failed surge in Iraq; the failed surge in Afghanistan; the myth of “Talibanistan”; all the games of Pipelineistan; the – still unanswered – key questions about 9/11; the killings of Osama bin Laden and al-Baghdadi; Afghanistan and Iraq dreaming of the New Silk Roads.

The absolute majority of the articles, essays, and interviews selected for this e-book were written in Afghanistan and in Iraq and/or before and after multiple visits to both countries.

So welcome to a unique geopolitical road trip depicting in detail the slings and arrows of outrageous (mis)fortune that continue to shape a great deal of the young 21st century.