HOME / Politics / Eric Hobsbawm, the joy of history and all that jazz

Eric Hobsbawm, the joy of history and all that jazz 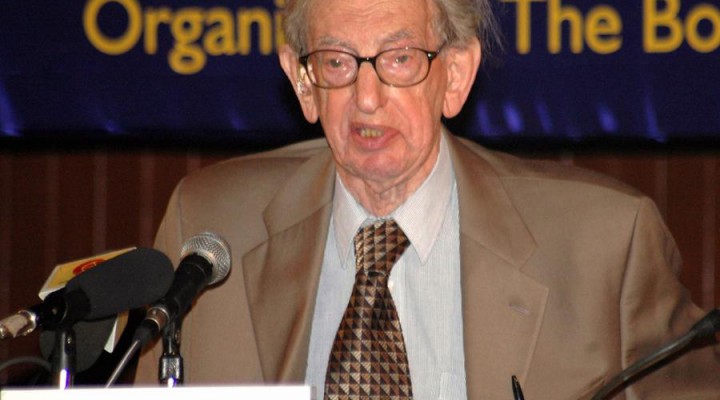 We all lose by not having Eric Hobsbawm absorb the geopolitical dementia of the early 21st century to later refine it in sharp, crisp historical analysis.

A new, exhaustive biography, ‘Eric Hobsbawm: A Life in History,’ by his former student and Regius Professor of History Emeritus at Cambridge, Richard Evans – out now in the UK and in the US in April – allows us to evaluate the extent of our loss.

It all starts with – what else – an undying love of good books: “In the end, one doesn’t just read them, one lives with them. That’s civilization.” That’s so apt coming from someone who in 1940, during the war, read “100 pages of Stendhal on the back of a lorry – a gesture of civilization.”

At the time “the English boy” born in Alexandria in June 1917, a Gemini, was not even contemplating the idea of becoming a professional historian. He’d rather write “proletarian literature.” During a stressful – historical – juncture when Hitler announced he expected to take up residence in London within a fortnight, Eric was already determined that “I want to write so that everyone recognizes the houses and streets, smells the flowers, feels the passions.” In the end, he somehow achieved his dream – to be a historian.

Readers in five continents know that Eric always defined himself as a Marxist. It says a lot about British intelligence that MI5 spent a lot of time and energy tracking Eric while totally bypassing the “Cambridge Five” who were merrily passing secrets to the USSR – Blunt, Burgess, Cairncross, MacLean and Philby – all of them, unlike Eric, Brit establishment to the core.

The book details delightful personal vignettes, such as: Eric in Paris in the early 1950s, “observing the passing scene from the approved cafes such as the Flore or the Rhumerie” and mingling with, among others, Lucien Goldmann, Roland Barthes and Edgar Morin, the great Henri Cartier-Bresson, going to jazz clubs, and interacting with intellectuals who were either unorthodox Marxists or drifting away from Marxism for good. He got to know Jean-Paul Sartre quite well – sharing the odd mutton curry at La Coupole.

At the time both the French and the British Communist Party were hardcore Stalinist, totally unlike Eric. No wonder the party in Paris never invited him to any meetings. Eric was a consummate political pragmatist. He may have been a communist, of course, but never sectarian. His loyalty, above all, was to the broad cause of socialism. As Evans stresses, “he believed consistently in the unity of the Left, not in any kind of Marxist sectarianism.”

The official ‘Made in the USSR’ party line on jazz was extremely negative during the Stalinist era. Then, rehabilitation ensued. By 1962 jazz was all the rage, for instance, in Czechoslovakia. That’s when jazz – and especially the blues – started to be sold across the “real socialism” sphere as the music of the oppressed black working class in capitalist America.

Enter Eric as jazz critic of the New Statesman, under the pseudonym Francis Newton. At the time, late 1950s to early 1960s, journalism was despised by British academia. Swinging from jazz clubs and concerts to the quasi-mythical hipster hangout, the Downbeat Club in Old Compton Street in Soho, Eric pulled it off as a cultural reporter instead of music critic. Many in academia were oblivious to his alter ego.

Eric’s jazz criticism is fascinating in itself. He was attracted by the cerebral classicism of the Modern Jazz Quartet rejecting “the old, full-blooded, spontaneous jazz … because it reminds them of oppression, illiteracy, of Negroes clowning to wheedle crumbs from the whites.”

He didn’t get Miles Davis – “surprisingly narrow technical and emotional range” – or Thelonius Monk – “neither the technical mastery nor the staying power” of Duke Ellington. On the other hand, he found Ornette Coleman “unforgettable.” He would always display a positively gloomy vision of mass-produced pop. Eric was a marvelous interviewee. I wish I could have asked him back in the 1980s what he thought of David Bowie.

Evans does full justice to the importance of the “Age” trilogy.

‘The Age of Revolution’, following European history from 1789 to 1848, made a splash with its formidable thesis tracing the simultaneous impact of the “dual revolution,” the French political and ideological and the British industrial; essentially, the foundation of the modern world.

The concept of “dual revolution” would become seminal in every historical writing and teaching of the past half-century. No one before Eric had shown that the Industrial Revolution was due to Britannia ruling the waves, which enabled it to create a virtual monopoly of cotton exports to India and Latin America.

He also definitely showed how the French bourgeoisie, as a ”coherent social group,” drove political change “when the French monarchy, mired in deep financial crisis following the War of Independence in the US, lost the support of the feudal aristocracy.”

By the time ‘The Age of Capital’ was out, in the mid-1970s, Eric had clinched a triple treat; academic recognition, vast commercial success, full respect and recognition by the British establishment.

‘The Age of Empire’, chronicling the “long 19th century” from 1789 to 1914, unveiled a magnificent concept also essential to any future historical scholarship. Arguably the best summary ever of Eric’s prodigious gifts was offered in a review by Perry Anderson: “economy of synthesis; vividness of detail; global scope, yet acute sense of regional difference; polymathic fluency, equally at ease with crops and stock markets, nations and classes, statesmen and peasants, sciences and arts; breadth of sympathies for disparate social agents; power of analytic narrative; and not least a style of remarkable clarity and energy, whose signature is the sudden bolt of metaphoric electricity across the even surface of cool, pungent argument.”

Eric instinctively knew already in 1989 what would happen after the collapse of the USSR. At a conference in Sweden, as recalled by French historian Patrick Fridenson, he prophesized: “With the Soviet Union you have had peace; you are going to have war.”

Later on, in 1990, he would write: “The fall of the Soviet-type system, about which all illusion had long gone, is less significant than the apparent end of the dream of which it was the nightmare version.”

No wonder Eric was a critic of nationalism and identity politics. He always stressed, “the political project of the left is universalist.” Nations were no more than artificial constructs – see, for instance, the British empire arbitrarily demarcating the borders of Afghanistan and Iraq, among others.

‘Age of Extremes’ turned Eric into a global superstar. But there are flaws. Essentially, the point of view is centered on Vienna, Berlin and London. There is no comprehensive analysis of the ascension of the American bourgeoisie, or the turbulence across East Asia. The book actually revolves around the history of the decline of a Western civilization that totally betrayed the 19th-century promise of cultural and material flowering.

At dinner parties, Eric eschewed small talk and behaved as a true political party animal. He wanted to cut to the chase right away. As his editor at Penguin, Stuart Proffitt, recalled: “The quality of his information from around the world, in extreme old age – this must have been when he was 93, 94, something like that – but he knew exactly what was going on all over the world. I mean, he was like a sort of one-man Economist Intelligence Unit. It was really, really extraordinary.”

Eric may have become widely respected in the US, due to his academic stints, and in India, but in Brazil he became larger-than-life. His books sold almost a million copies. He was essential in shaping the political thinking of two former Presidents, Cardoso and Lula.

In 1975, during the military dictatorship, he was invited to the first major conference featuring leftist intellectuals such as Arno Mayer from Princeton and Juan Linz from Yale. Talking fluently about Brazilian peasant millenarian movements, he had the guts to declare he was a Marxist historian, planting a seed that would engender the end of the military dictatorship in the following decade.

It’s impossible to understand where Eric Hobsbawm was coming from without the essential background provided by Evans. Eric became acquainted with Marxist theory and an ideal of communism in the early 1930s, when the Communist Party seemed to many young people of his generation to embody the only possible hope of defeating Nazism and building a better world.

So this spectacle of a great mass movement sharing common ideals forged in Eric a lifelong, visceral emotional sense of belonging, healing the scars in his shattered family life. Evans sums it all up: “This feeling lasted, buried deep in his soul, for the rest of his life.”

And that’s how we should also understand his passion for jazz – the search for a community that provided some sort of emotional equivalent of a family.

Eric never followed the party line. Only intellectual amoebas could possibly accuse him of being a Stalinist. He did, consciously, remain part of a global network of fellow leftist intellectuals for the rest of his life. In a nutshell, he was a crossover Marxist, an absolutely unique, polyphonic, intellectual mix shaped by myriad influences.

And the greatest thing is that he was, above all, one helluva writer. It was literature that guided him to history. And that’s why, ashes to ashes, his global appeal will remain something for the history books.

0 thoughts on “Eric Hobsbawm, the joy of history and all that jazz”