HOME / WORLD / Checkmate fighter puts Russia ahead of the game

Checkmate fighter puts Russia ahead of the game 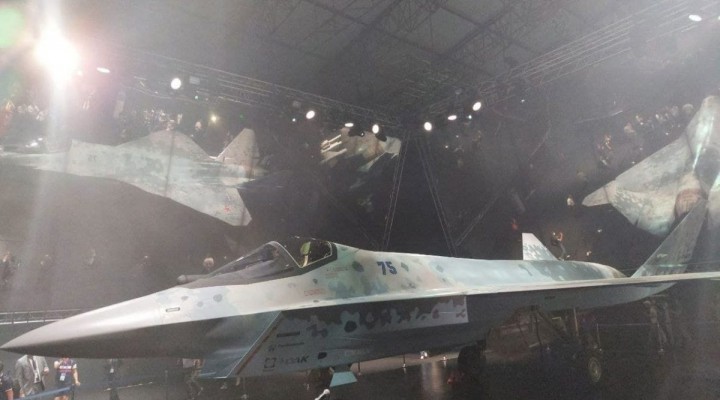 While the dogs of demonization bark, Russia’s newfangled armaments are flat out beating the competition

The annual MAKS aerospace show kicked off its 2021 installment at Zhukovsky Airport outside Moscow – not with a bang, but with multiple bangs.

MAKS – whose name is an acronym for the Russian mouthful Mezhdunarodnyj aviatsionno-kosmiches, literally international aviation and space show – is famous for showing off the latest hits in aerospace and defense technology from major Russian and foreign companies.

The lands of Islam would not have failed to notice that President Vladimir Putin’s welcoming address fell exactly on Eid al-Adha – and the president made sure to note, in a nod to ethnic integration, that 20% of Russian aviation industry employees are Muslims.

The undisputed star of MAKS 2021 was Checkmate, concisely described by military analyst Oleg Panteleev as a single-engine, 5G light tactical fighter – and teased before the official presentation with a slick, Hollywood-style ad tailored for global customers (UAE, India, Vietnam, Argentina).

Checkmate is already being hailed across the Global South as the new epitome of lethal beauty – like the aerial equivalent of a pair of Louboutin pumps. It will probably be known by the less sexy denomination Su-75: after all, Checkmate belongs to the Sukhoi family.

The CEO of Rostec’s United Aircraft Corporation (UAC), Yuri Slyusar, says that production of Checkmate will start in 2026, after a series of complex tests.

Here is Rostec’s full presentation (in Russian), where we learn that Checkmate “can carry up to five air-to-air missiles of various ranges in its top version,” including the entire spectrum of 5G missiles.

This means that Checkmate can carry all weapons deployed by the Su-57 jet fighter – another star of MAKS 2021. Slyusar explained that Checkmate’s design was based on the Su-57.

The Sukhoi Su-57 – which made an exhibition flight at MAKS – is a fifth-generation multi-role fighter conceived to raise hell against all types of air, ground and naval targets.

The Su-57 features stealth technology utilizing a vast array of composite materials; reaches supersonic cruising speed; and comes with a very powerful onboard computer – described as an “electronic second pilot” – and a radar system spread across its body.

Yet the first day at MAKS was all about Checkmate. Military analyst Andrei Martyanov, in his inimitable style, summed it all up: “This Checkmate or, if you wish, Su-75 is not a hangar queen and is designed for battle and, in the end, it is Su-57 Lite and a platform (I stress it – platform) which gives birth to very many other variants of this aircraft. Do not also forget that Su-57 will also be offered for export.”

Checkmate, according to chief designer Mikhail Strelets, essentially has a single engine with a deflected thrust vector; goes supersonic for a long time; and has a shortened take-off and landing compared with the Su-57. The West will be uncomfortable when it comes to further comparisons between Checkmate’s efficiency and that of the not exactly brilliant F-35.

Some of Checkmate’s most important features, according to UAC,  include: flying at high altitude in all kinds of weather; modularity; simplified maintenance and operations; post-sale support; “good transportation capability” (range and endurance); “AI support for combat missions”; “low flight hour cost and large payload”; and, most important of all for international clients, good value for money.

Oh yes: there will be an unmanned “variant.” UAC is already working on it.

In parallel to MAKS, the Russians also conducted another test of the S-500 “Prometheus” missile system, which for all practical purposes is beyond any competition in terms of intercepting the whole range of current – and even future – air and space attack at top altitudes and speeds.

For years, Martyanov has been writing in detail about the whole process in his books and articles.

Quantum Bird, a top physicist from the CERN in Geneva, tells me that “with Prometheus getting online, NATO gets the worst-case scenario vis-a-vis Russia: NATO attacking missiles getting intercepted even before leaving their territory, with Russia’s retaliatory response getting there before or together with the interceptors. Prometheus can also handle inconvenient low-orbit spy satellites NATO likes to fly over Russia.”

One day before the start of MAKS, Russia also test-fired the Tsirkon hypersonic missile, launched from the frigate Admiral of the Fleet of the Soviet Union Gorshkov in the White Sea, at Mach 7, against a ground target 350 km away in the coast of the Barents Sea. The Russian Defense Ministry said the missile hit “a bullseye.” Tsirkon hypersonic missiles will be equipping Russian submarines and warships.

Martyanov concisely explains the “secret” – which is no secret – of all these technological advances: “It is like milking a productive cow – once you have a great healthy cow, you just take care of it and milk it. Same here, but you need to make the right strategic decisions, which consider all trends. That is how you get S-500, Zircon, Su-57 and this new one. Chinese aircraft will not be able to compete with Su-75 in former Soviet markets and the F-35 is not a competitor to it at the international level. In a sense, it is a checkmate.”

For denizens of America’s Thinktankland, already losing sleep over Su-35s, S-400 missile systems and silent submarines, what the future is bringing is extra insomnia over hypersonic missiles, the S-500 Prometheus and an array of early warning systems and radars.

Russia spends on its military industry roughly 12 cents for every dollar the US spends. The practical result is that the Beltway is consistently out-planned, out-designed and out-gunned.

0 thoughts on “Checkmate fighter puts Russia ahead of the game”