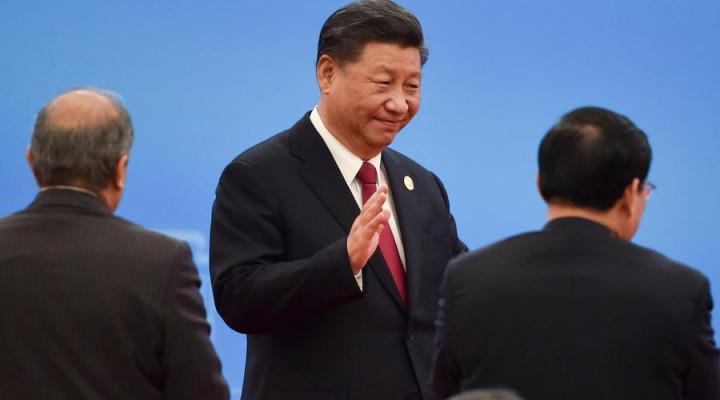 Under the Trump administration, Belt and Road has been utterly demonized 24/7: a toxic cocktail of fear and doubt, with Beijing blamed for everything from plunging poor nations into a “debt trap” to evil designs of world domination.

Now finally comes what might be described as the institutional American response to Belt and Road: the Blue Dot Network.

lue Dot is described, officially, as promoting global, multi-stakeholder “sustainable infrastructure development in the Indo-Pacific region and around the world.”

It is a joint project of the US Overseas Private Investment Corporation, in partnership with Australia’s Department of Foreign Affairs and Trade and the Japan Bank for International Cooperation.

Now compare it with what just happened this same week at the inauguration of the China International Import Expo in Shanghai.

As Xi stressed: “To date, China has signed 197 documents on Belt and Road cooperation with 137 countries and 30 international organizations.”

This is what Blue Dot is up against – especially across the Global South. Well, not really. Global South diplomats, informally contacted, are not exactly impressed. They might see Blue Dot as an aspiring competitor to BRI, but one that’s moved by private finance – mostly, in theory, American.

They scoff at the prospect that Blue Dot will include some sort of ratings mechanism that will be positioned to vet and downgrade Belt and Road projects. Washington will spin it as a “certification” process setting “international standards” – implying Belt and Road is sub-standard. Whether Global South nations will pay attention to these new ratings is an open question.

Blue Dot should also be understood in direct comparison with what just happened at the summit-fest in Thailand centered on the meetings of East Asia, the Association of
Southeast Asian Nations and the Regional Comprehensive Economic Partnership (RCEP).

The advent of Blue Dot explains why the US sent only a junior delegation to Thailand, and also, to a great extent, why India missed the RCEP train as it left the pan-Asian station.

Indian Prime Minister Narendra Modi is still between a rock – Washington’s Indo-Pacific strategy – and a hard place – Eurasia integration. They are mutually incompatible.

Blue Dot is a de facto business extension of Indo-Pacific, which congregates the US, Japan, Australia – and India: the Quad members. It’s a mirror image of the – defunct – Obama administration Trans-Pacific Partnership in relation to the – also defunct – “pivot to Asia.”

It’s unclear whether New Delhi will join Blue Dot. It has rejected Belt and Road, but not, finally and irrevocably, RCEP. ASEAN has tried to put on a brave face and insist differences will be smoothed out and all 16 RCEP members will sign a deal in Vietnam in 2020.

Yet the bottom line remains: Washington will continue to manipulate India by all means deemed necessary to torpedo – at least in the South Asian theater – the potential of Belt and Road as well as larger Eurasia integration.

And still, after all these years of non-stop demonization, the best thing Washington could come up with was to steal Belt and Road’s idea and dress it up in private bank financing.

Now compare it, for instance, with the work of the Economic Research Institute for ASEAN and East Asia. They privilege the ASEAN Outlook on the Indo-Pacific, an original Indonesian idea, instead of the American version. The institute’s president, Hidetoshi Nishimura, describes it as “a guideline for dialogue partners” and stresses that “Japan’s own vision of the Indo-Pacific fits very well with that of ASEAN.”

As much as Nishimura notes how “it is well known that Japan has been the key donor and a real partner in the economic development of Southeast Asia throughout the past five decades,” he also extols RCEP as “the symbol of free trade.” Both China and Japan are firmly behind RCEP. And Beijing is also firmly stressing the direct connection between RCEP and Belt and Road projects.

In the end, Blue Dot may be no more than a PR exercise, too little, too late. It won’t stop Belt and Road expansion. It won’t prevent China-Japan investment partnerships. It won’t stop awareness all across the Global South about the weaponization of the US dollar for geopolitical purposes.

And it won’t bury prevailing skepticism about the development project skills of a hyperpower engaged on a mission to steal other nation’s oil reserves as part of an illegal Syrian occupation.