Hatred of the White Hetero Male 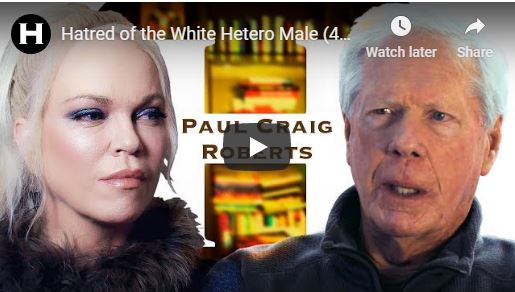 Herland Report TV (HTV): “What happened in the US was the liberal-Left wing class ceased to represent the working class against the capitalist exploit employer. They created a new victim group and a new exploiter: the white heterosexual male”, says Dr. Paul Craig Roberts.

Dr. Roberts is chairman of The Institute for Political Economy, former editor of Wall Street Journal and a well-known author of many books. “The whole notion of class conflict has been replaced by gender conflict, race conflict, sexual preference conflict. The Liberal-Left has created a new victim group and a new exploiter. This exploiter is now “the white heterosexual male”. The new victim class is everyone else. It’s the women, the blacks, the Hispanics, the homosexuals. Anybody but the white heterosexual male.” “We now have a situation in which you have new forms of diversity, such as homosexuals, straight, gender differences, racial differences and these have taken the place of the class difference. So, the whole thing has been turned around.”

The Shutdown of White Heterosexual Males and Free Speech

0 thoughts on “Hatred of the White Hetero Male”