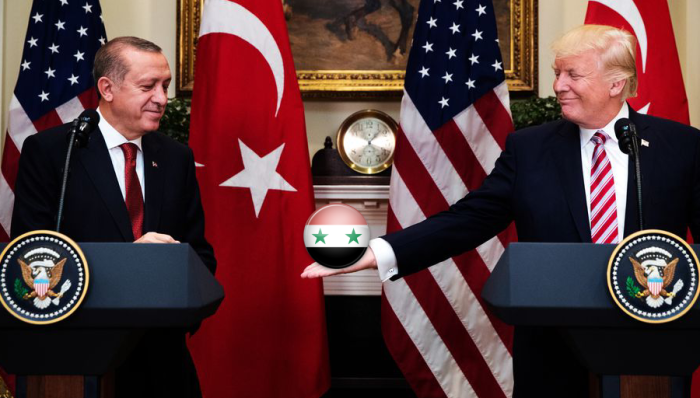 As Turkey and the United States achieved an agreement on the fate of Northern Syria, the legal government of Syrian Arab Republic has strongly condemned it claiming that this achievement constitutes a flagrant aggression against Syria’s sovereignty and territorial integrity.

While the sides of talks call the results of negotiations as “good start”, international community continues to keep silence and prefer not to comment why two independent states shape the destiny of the third one. Neither UN representatives nor Arab League countries pay its attention on the talks and are still unmoved by Northern Syria.

Nowadays Turkey is the state which tries to play a double game in Syria but falls between two stools. On the one hand the United States of America – Turkey’s NATO ally –  consider Syrian Kurds as the closest partner in Syrian conflict. That’s the main reason why Turkey presidents’ threats are still on the “threat” level.

We’ve asked political commentator and Middle East researcher Marwa Osman her opinion on this issue. According to Marwa Osman the main goal which stands behind the talks between Turkey and the United States is the annexation of Northern Syria.

“What Turkey and the US are trying to do is to fight over who shall annex northern Syria first. They will both fail. The US is not capable of doing so militarily and Turkey will doom itself out of any future resolution if it continues to illegally occupy Syrian land. Turkey needs to remember that occupation creates resistance. Turkey won’t be able to handle the resistance…or at least for now since Erdogan is not doing so good politically in Turkey to begin with”, – Osman said.

Moreover, the fact that the fate of Syrian land depends on two other states’ decision is also beyond of expert’s mind. The territorial integrity of Syria should stay behind Syrians and no one else. Any illegal force must be removed.

“Northern Syria is Syrian. Kurds in Syria are Syrians even if they still support the American occupation of eastern Syria. This war will not end until all illegal foreign presence is removed. If you are a state not invited by the sovereign Syrian government then you will have to leave or face the consequences”, – Osman added.

On the other hand Hayat Tahrir al Sham militant group, which is partly funded by Turkish officials, looses its positions in Idlib province. Despite the agreement which was reached by the states of Astana format, Turkey continues to ignore its obligations regarding the de-escalation zone. It results in sufferings of civilians who lives in HTS-held areas.

You could see that we’ve obtained the letter from Sheikhs of Western Aleppo where they accuse HTS militants of violation of humans rights in the region. They claim that one of the main reasons to this is that Turkey ignores and violates the terms of the de-escalation agreement.

#EXCLUSIVE Last month, #Sheikhs of Western #Aleppo villages turned to the Government with a letter, where plead to send the #SyrianArmy in the South-Western regions of the Province in order to free the people of Syria under the oppression of #HTS and other pro-#Turkish militants. 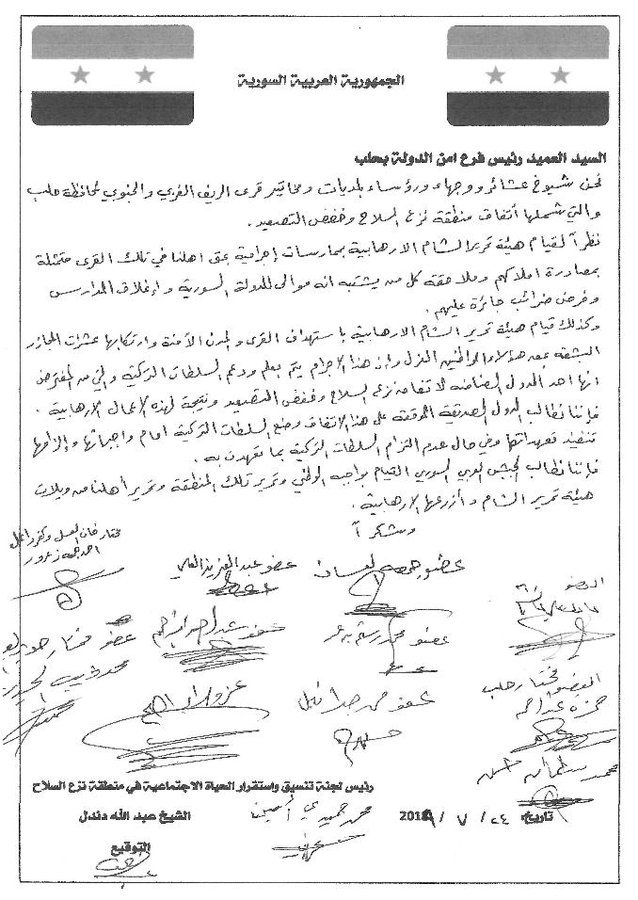 “If these Sheikhs were not suffering under the rule of the HTS who is still illegally funded,trained and armed by Turkey, they wouldn’t have turned for the Syrian government’s help”, – Marwa Osman said.

According to Osman’s opinion Turkey hasn’t kept it promises regarding de-escalation agreement. “This will create a problem for the upcoming Astana meeting in October if not resolved before that date”, – Osman added.

So, the next Astana meeting will be the litmus paper for international community and in particular for Turkey. If the participants will be able to persuade Turkey to cut off funding of armed factions in Aleppo and Idlib provinces, it may become possible to avoid military activities and followed by them casualties among civilians in Northern Syria.