A new Great Game has begun in the Eastern Mediterranean 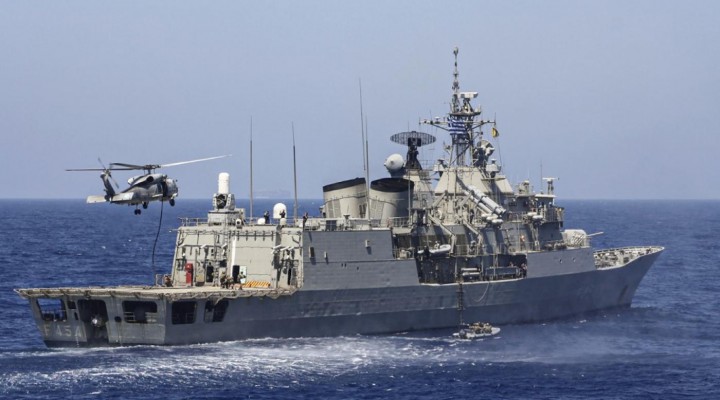 As tensions soar over oil and gas development, the international community should actively look to encourage de-escalation

After centuries of marginalisation, the Mediterranean Sea is back in the international spotlight. A new Great Game is unfolding in its eastern part, similar to the 19th century machinations of the British and Russian empires in Central Asia.

Massive migration flows from Africa and the Middle East towards Europe have traversed its waters, particularly in the wake of the Arab Spring and the subsequent conflicts in Syria and Libya.

At the same time, the enduring Israeli-Palestinian conflict and its biased management by the US continues to stir resentment. These crises have concerned the states overlooking the Mediterranean, but more recently, the resources hidden in its sea beds have fuelled controversy.

Oil and gas discoveries off the coasts of Egypt, Gaza, Israel, Lebanon, Syria and Cyprus have added a new dimension to old, unresolved conflicts. The dispute between Greece and Turkey for control over the Aegean Sea, the division of Cyprus, and the issue of maritime boundaries between Lebanon and Israel are just a few examples.

Almost all of the countries on the Eastern Mediterranean’s shores claim conflicting and overlapping exclusive economic zones (EEZs) to exploit these resources up to 200 nautical miles from their coasts. A political and legal controversy – promising decades of work and fees for specialised international jurists and lawyers – is looming.

These increasing tensions have been attributed to the alleged disengagement of the US from the area and from its recent historical role as referee. But a referee must be impartial, and the record of the US, from this point of view, is far from satisfactory.

The real problem is the lack of US leadership when it had the soft and hard power, as well as an intact reputation, to make a difference. American leadership within Nato has not eased the decades-old rivalry between the organisation’s two southernmost members, Greece and Turkey. The same can be said about the Cyprus issue.

Instead of solving problems, Washington has preferred to freeze or ignore them. The US now seems to be a narcissistic socialite who has received a VIP party invitation and wonders: “Will they notice me more if I attend or I do not?” Furthermore, from November onwards, the US will likely be paralysed for months in deciding who has really won the presidential election.

When the US leaves a void, many are ready to fill it. Russia and Turkey are two perfect examples here. For around a decade, Russia has been smartly playing its cards in the Syrian and Libyan conflicts – and in any possible settlement of these crises, its interests will have to be taken into account.

Turkey is assertively promoting an ambitious regional agenda that includes the Aegean Sea, EEZs, Cyprus and, again, the conflicts in Syria and Libya. Furthermore, Ankara’s support for the Muslim Brotherhood is stirring tensions in Egypt, Israel, the UAE and Saudi Arabia, as well as in some western democracies.

Turkey seems determined to reclaim the leadership of Sunni Islam that it held for centuries during the Ottoman Empire. Saudi Arabia, the UAE and Egypt, in particular, perceive this as an existential threat.

Turkey has also been seeking for decades to join the European Union, an ambition it seems to have given up on. While it was long a secular country, that is no longer the case, and the strong reservations by Germany and France to such an entry have been insurmountable. No matter how secular Turkey’s constitution has been, the core issue has remained its predominantly Muslim population.

Turkish President Recep Tayyip Erdogan now has the attitude of someone who, after a very long engagement, realises he will never get to marriage, and reacts with acrimony and a spirit of vengeance. Historians in the future will establish whether his Islamist and authoritarian drive was planned since the beginning, or whether it was a reaction to the EU’s resistance.

The truth is that Turkey, which once sought to maintain good relations with its neighbours, has moved to a position of having almost no friends in the neighbourhood. Ankara is experiencing tensions with Greece, Cyprus, Syria, Iraq, Egypt, France and the EU. It also has a hostile relationship with Saudi Arabia and the UAE, an ambivalent relationship with the US, and conflicting agendas with Russia in Syria and Libya.

The country’s economy is also in a state of uncertain health. But Erdogan is a shrewd player, and he still possesses some important cards: a strategic position on Nato’s southern flank, US military bases, and the ability to reopen the tap and send millions of Syrian refugees hosted in Turkey towards Europe.

The large oil and gas reserves discovered in the Eastern Mediterranean should ideally be convoyed to Europe through a so-called East Med pipeline involving Egypt, Israel, Cyprus and Greece. Late last year, Turkey and the Tripoli-based Libyan government signed a maritime boundaries deal, potentially blocking any pipeline towards Europe. Egypt, Greece and Cyprus proclaimed their own zones, specular to Turkey’s and Libya’s.

While Russia and Turkey have shown conflicting agendas in Syria and Libya, on the East Med pipeline, they might be on the same page. Both nations have an interest in not enlarging the list of eastern energy suppliers to Europe.

The EU is acting in a scattered fashion. France is supporting Greece and sending its navy, Germany is trying to mediate, Italy is watching with the migration issue with concern and Brussels seems paralysed. Things are also very bad for Nato, diagnosed as brain dead by French President Emmanuel Macron.

Joint naval exercises in the area are not helping to calm tensions; in such circumstances, accidents are possible, and the capability to manage them cannot be taken for granted.

De-escalation is sorely needed, and to achieve it, a sort of consultation mechanism must be established. A contact group for the Eastern Mediterranean, where all political, economic and legal grievances could be tabled and discussed, may be a starting point.

Such a group should encompass all the nations overlooking the basin, together with the US, EU, Russia and some other major European powers. Considering its status in the UN Security Council and that the southern corridor of its massive Belt and Road Initiative will go through the Eastern Mediterranean, China’s presence may also be important.

Last but not least, UN Secretary-General Antonio Guterres should consider the appointment of a special envoy for the Eastern Mediterranean.