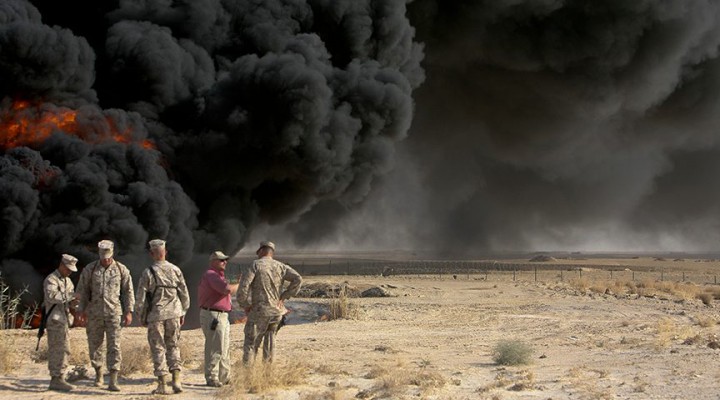 You don’t have to be a professional environmentalist to see how Washington and its G7 partners pay lip service to environmental protection. We are constantly hearing about the “green” initiatives under the Paris climate agreement and the need to reduce carbon dioxide emissions in the atmosphere. There is even talk of the need to introduce quotas for states. It is logical to assume that if the US has committed itself to restrictions, then it should do so in practice.

Even the US Defense Department is focusing on environmental issues. On 7 October 2021, the Pentagon issued its Climate Adaptation Plan.

In response to the document’s release, specialised media in the US noted that the “U.S. military will need to understand and anticipate how climate stress will affect global stability, in areas of the world where it operates today and where it may need to operate tomorrow. Its thoughts on that challenge will soon be published in a Climate Risk Assessment. In addition, it will be charged with reducing emissions, increasing energy efficiency and renewable energy, and integrating electric vehicles. In response, it will be publishing a Sustainability Report and Implementation Plan later this year, after the anticipated Sustainability Executive Order is released.”

– ensuring access to quality data on climate and the environment, and creating decision-making processes to include that information, reducing costs and the risk to operations;

– training troops to withstand extreme weather conditions, and ensuring that equipment can function in very high and low temperatures;

– reducing the risk of floods, wildfires, and other natural disasters on military installations by continually assessing the risk to bases and other facilities; and

– enhancing cooperation with partner nations and other US agencies that can increase knowledge about climate change, help build resilience, and reduce costs.

However, based on the fiscal year 2023 budget, there will hardly be anything to spend on climate programmes, because much of the added money is earmarked for “existing investment streams” such as military construction projects and the acquisition of cost-effective equipment.

Overall, the Pentagon’s plan is based on fairly rational assessments. In contrast to the rhetoric of political leaders in the West, there are no emotional appeals for the immediate introduction of “green energy” or far-fetched threats regarding the use of nuclear energy and traditional types of fuel. Nor is there any mention of environmental protection. The US military simply regards possible climate change as one of the challenges that needs to be prepared for.

It has already been noted that the “U.S. Defense Department (DoD) has begun to acknowledge that non-state actors and hostile nations are not the only or even most complex threats that exist, as military bases and supporting infrastructure are subject to more severe hurricanes and rising sea levels around the world. This was clearly evident when the Category 5 hurricane Michael bombarded Tyndall Air Force Base in Florida this September, severely damaging 95 percent of its buildings, and costing $5 billion in aircraft repairs. Several initiatives are being undertaken, including building sea walls around military bases vulnerable to flooding and updating heat related illness policies with improved prevention measures and treatment protocols to meet rising temperatures. DoD assessments, such as the 2019 Report on the Effects of Climate Change to the Department of Defense and the 2020 Army Climate Resilience Handbook represent just some of the efforts being taken by the colossal U.S. national security establishment to deal with climate change symptoms … While the U.S. military has taken initial steps to address climate change, it still has a long way to go on its mitigation and adaptation efforts, as well as shifting strategic mindsets towards integrating climate considerations into military decision making.”

In 2019, the US Army War College released a report suggesting that climate change will directly affect military interests. On the one hand, hurricanes and other natural disasters could cause considerable damage to the Pentagon’s military infrastructure, and, on the other, the adaptation of other countries’ armed forces to new weather conditions could give Washington’s potential adversaries a competitive advantage. First and foremost, the US military is referring to Russia and the Arctic.

Meanwhile, think tanks are coming up with all kinds of initiatives as a kind of democratic smokescreen. For example, the Center for Climate and Security, whose advisory board includes many retired generals and admirals, is trying to make out that it is actively involved in environmental issues and pollution control.

Yet, following the election of Joe Biden as president of the United States, US experts were still asking whether there would be changes to military policy in general as a result of the climate agenda pushed by the Democrats during their election campaign.

Curiously enough, the Pentagon’s 7 October report was released on the eve of the 26th UN Climate Change Conference (COP26) set to take place in Glasgow from 31 October to 12 November.

So, what is really going on? What is the US military’s role in current climate change? The reality is in sharp contrast to the big statements being made by US politicians.

In 2019, the Watson Institute for International and Public Affairs released a paper on the impact of the US military on the environment that contains interesting and detailed information on US military pollution around the world.

Citing multiple sources, it states that, between 1975 and 2018, the Pentagon’s CO2 emissions totalled 1,267 million metric tons. The Pentagon’s yearly emissions far exceed those of the US steel industry and the total emissions of countries such as Sweden, Denmark, and Portugal.

Between 2001 and 2018, emissions from overseas operations totalled 440 million metric tons.

Installations that support US operations and power projection capability include more than 560,000 facilities with over 275,000 buildings at 800 bases situated on around 27 million acres of land in the US and across the world. In fiscal year 2017, the Defense Department spent $3.5 billion on heating, cooling, and the provision of electricity to its facilities, and, in 2016, it spent $3.7 billion. Each installation can produce greenhouse gas emissions.     The Pentagon building itself, located in Arlington, Virginia, emitted 24,620.55 metric tons of CO2 in 2013.

The US Army, Navy, and Air Force use up roughly the same amount of energy.

Detailed data for 2014 shows which command used energy and for what purpose.

Scientists also calculated the combined effect of US military activities and interventions, including:

The paper also provides detailed statistics on military aircraft – which model consumes how much fuel and produces how many CO2 emissions.

The paper by the Watson Institute also states: “Reductions in military fossil fuel use would be beneficial in four ways. First, the US would reduce its overall greenhouse gas emissions. This would thereby mitigate climate change and its associated threats to national security. Second, reducing fossil fuel consumption would have important political and security benefits, including reducing the dependence of troops in the field on oil, which the military acknowledges makes them vulnerable to enemy attacks. If the US military were to significantly decrease its dependence on oil, the US could reduce the political and fuel resources it uses to defend access to oil, particularly in the Persian Gulf, where it concentrates these efforts. Third, by decreasing US dependence on oil-rich states the US could then reevaluate the size of the US military presence in the Persian Gulf and reevaluate its relationship with Saudi Arabia and other allies in the region. Finally, by spending less money on fuel and operations to provide secure access to petroleum, the US could decrease its military spending and reorient the economy to more economically productive activities.”

These seem like reasonable suggestions, but will the US military follow them? It has been two years since the paper was released, and not only has their approach not changed, it is limited to pompous rhetoric. The Pentagon’s plan focuses on pragmatic problem solving rather than the development of mechanisms to actually reduce pollution. After all, the US would then have to reduce its military bases overseas, primarily in Japan, South Korea, and Germany.

Keeping the Pentagon company as a leading polluter of the environment is the UK military. The first independent calculation of its kind found that the UK’s military and industrial sector annually emits more greenhouse gases than 60 individual countries, such as Uganda, which has a population of 45 million people.

The new report by Dr Stuart Parkinson of Scientists for Global Responsibility states that the UK Ministry of Defence is “misleading” the public about its levels of carbon emissions.

The analysis also uses a different method to calculate the UK military’s carbon emissions – based on annual defence spending – which finds that the total “carbon footprint” of the UK military amounts to 11 million tonnes of CO2 equivalent. This is more than 11 times higher than the figures provided in the main text of the Defence Ministry’s annual reports.

While the US has simply kept quiet and tried not to raise the issue of the US military’s effect on the environment, the UK has decided to use the tried and tested technique of media spin; that is, misrepresenting the data.

No matter how much high-level officials in Washington and London talk about the need to protect the environment, there can be no doubt that the US and UK militaries are, in fact, the greatest threat to the environment of the planet.