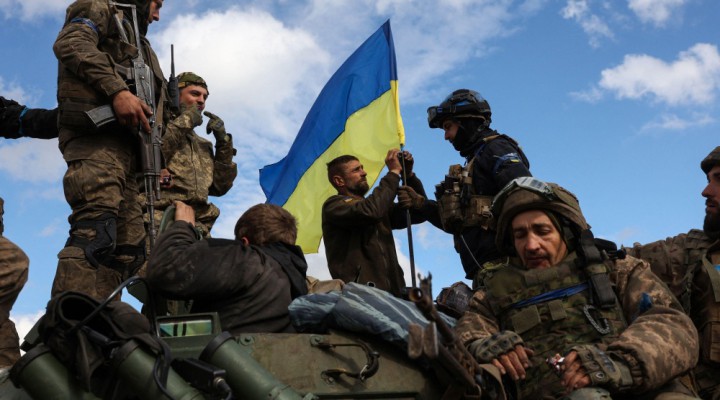 The current actions of the AFU in the Kherson direction and the forced withdrawal of the Russian army have inspired unhealthy optimism in both the junta in Kiev and its Western patrons. It is widely believed, with references to various Western politicians and military officials, that Kherson is not a strategically important hub from which it is possible to control Crimea (and strike at it), but an important psychological and moral stimulus for the Ukrainians. Further advancement will allow the Ukrainians to take control of the North Crimean Canal, that is, to cut off the water supply to Crimea. And, in addition, Kiev will strengthen its position for negotiations with Russia. If questions of reparations have already begun to be raised, the new successes may encourage Zelensky to impose the most unbelievable conditions.

At the same time, it is obvious that the West is not going to reduce its assistance to Ukraine. The results of the U.S. congressional elections are unlikely to change Washington’s overall attitude toward the current conflict. The EU also shows no signs of changing its policy so far.

At the same time, if we trace how the West has acted since the start of the special military operation in February, we will discover that it is adapting its approaches, which creates new risks for Russia’s vital interests.

In May 2022, retired U.S. Marine Corps Colonel Andrew Milburn pointed out that “the provision of military aid to Ukraine does not appear to be aligned with battlefield requirements… Military aid should be focused on actual requirements — and it is here where US policy breaks down. The need for long-range precision fires is one example… There has been no serious discussion of providing the Ukrainians with the Multiple Launch Rocket System or long-range strike drones… Ukrainian helicopters did made it through the gauntlet of Russian air defense systems, but the risk of losing air crews made this method of resupply prohibitively expensive. It would have been a relatively simple task to flood the air with decoys such as cheap commercial drones, like the various models manufactured by DJI, overwhelming Russian air defenses, while a handful of logistics drones delivered vital supplies that would have allowed the garrison to fight on indefinitely”.

Over the past months, the U.S. military and political command has partially corrected this mistake, and we have seen the emergence of new weapon systems used by the Ukrainian side. Not to mention the large volumes of compact anti-tank and anti-aircraft systems that have arrived and continue to arrive in Ukraine.

There is another risk, namely the threat to the lives of civilians. After the provocation by the Ukrainian military with the support of Western specialists in Bucha, where supporters of reunification with Russia were killed and that was presented as war crimes of the Russian army, this scenario could be repeated in Kherson.

The fact is that from the very beginning of the operation Ukraine staked on “guerrillaism” in order to paralyze the logistics and rear of the Russian army. But not only that. The part of this strategy is also the identification of individuals who cooperate with the Russian administration.

As Jean-Franus Rattel (University of Ottawa), who has researched this issue, writes, “rather than confront Russian forces directly, the insurgency has mainly focused on targeting collaborators — particularly in southern Ukraine — and disrupting Russian military logistics in hopes of making the occupation difficult to sustain in the long run. Assassination attempts against pro-Russian administrators and their collaborators have been the insurgency’s main tactic, aimed at spreading fear and deterring recruitment. Among the 55 episodes of insurgent activity documented between Feb. 24 and Nov. 2, over half (31) involve assassination attempts against public officials on Russian-occupied territory, leaving 12 targets dead and 12 wounded. The pace of the attempts increased rapidly throughout the summer, underlining the insurgency’s role and the lack of an effective Russian counterinsurgency. The methods used have included improvised explosive devices, car bombs, shootings and even nerve agents. Kill lists of alleged collaborators have been circulating online, presumably to discourage pro-Russian officials from staying in office”.

The author notes the propaganda activities of Ukrainian Nazi cells, the emergence of groups such as the “Berdyansk Partisan Army” and the Resistance Movement “Free Ukraine”, which are quite active on the Internet and have published videos threatening the Russian military and all those who support them.

Attacks on Russian territory also fit into this picture. Ukrainian insurgents and their accomplices in Russia have been actively sabotaging railroads and power lines in the Kursk and Belgorod regions. They may also have been involved in incidents involving fuel and weapons bases on Russian territory. According to the New York Times, Ukrainian insurgents manage to regularly cross enemy lines and connect with Ukrainian armed forces. This information is difficult to prove or disprove, but the facts confirm the activity of certain forces, which may qualify as terrorist activity.

Jean-François Rattel concludes that “the limited cases of direct confrontation with Russian armed forces (versus targeted assassinations) suggest a carefully executed approach meant to wear down occupying forces by focusing on collaborators and their institutions. Targeted assassinations are a powerful symbol and require fewer resources and less coordination between partisans and regular forces. At the same time, the insurgency’s success in targeting Russian weapons depots and supply lines underlines its broader role in Ukrainian military efforts”. Therefore, such behavioral techniques will continue to be employed in the near term.

Finally, there are risks in changing the strategic directions of the AFU in the theater of operations. In addition to the land corridor to Crimea, naval activities may be activated and taken to another level.

Daniel Fiott, who is the head of the defense and public administration program at the Center for Security, Diplomacy and Strategy at the Brussels School of Government, notes that “Ukraine has shown a high-degree of battlefield pragmatism and ingenuity and it has used drones and make-shift anti-ship missiles to keep Russia’s navy at bay. Its attack on the Kerch Bridge is an example of the lengths Ukraine’s forces are willing to go, even without naval capabilities.

Depending on how far Ukraine repels Russian forces, the West should reconsider its delivery of naval-relevant weapons to Kyiv. This could start with greater inflows of anti-ship missiles such as the Harpoon, but it can also mean training Ukraine armed forces to use micro-torpedoes from the growing stocks of patrol vessels they are likely to receive in future. Today, there are repeated calls for more drones, fighter jets and tanks but there is a need to seriously consider the naval dimension here as patrol vessels alone will not be able to shift the naval balance against Russia”.

Fiott not only confirms Ukraine’s role in organizing the attacks, but also is engaged in clear incitement for more military aid in such quantity and quality that it can change the current balance of power in the Black Sea.

0 thoughts on “Ukraine’s Military Strategy And U.S. National Interests (I)”