HOME / SOCIAL/CULTURAL / Feminist Militarism As The Face Of Western Politics 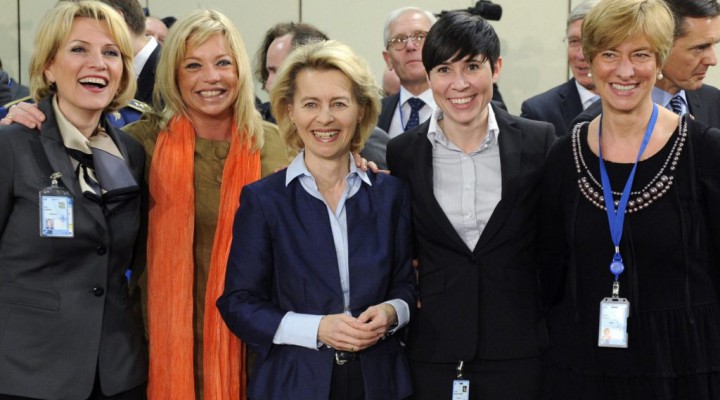 There is a myth among the feminist wing of the liberal school of international relations that they often like to use and repeat to prove their case. They believe that, since the modern system of power is built by men who are inclined to think like soldiers (or rivals), the world is doomed to wars and conflict. But if the world was ruled by women, liberal feminists dreamily pontificating from lofty podiums and university departments, then peace and harmony would reign supreme. After all, women do not have the phallocentric way of thinking (as the postmodernists love to say) that is characteristic of the patriarchal system, but rather a mothering instinct that would encourage women politicians to treat not just those closest to them with compassion, but everyone else too. Proponents of this outlandish theory believe that women are more prone to empathy, so, with the transference of these feelings into international relations, there would be world peace. This theory is in no way borne out by practice, however.

While the feminisation of Western society is clear – one needs only recall the 2014 photograph of the defence ministers of Germany, Norway, Sweden and the Netherlands, who, at that point in time, were all women (as were the defence ministers of Italy and Albania) – this is more to do with the degradation of masculine culture in the West. Incidentally, did their feminine charms and lack of a phallocentric way of thinking coerce Ukraine into a peaceful resolution of the conflict in Donbass? Not at all.

And when it comes to world politics, there is historical evidence of women politicians provoking and exacerbating conflicts. Let’s stick to recent history, however, and look at how these postmodern Amazons have influenced crucial political decisions.

We’ll start with former US State Secretary Madeleine Albright. She was the first woman to fill the post and distinguished herself by pursuing a tough foreign policy using military force. Madeleine Albright was directly involved in the decision to bomb Yugoslavia, and it is known that she chose the targets in the Balkan country personally. Later on, she openly and publicly demonstrated a pathological hatred of the Serbs.

Condoleezza Rice is another case in point. She served as national security advisor to President George W Bush between 2001 and 2005. Along with Colin Powell, Condoleezza Rice maintained that Iraq had weapons of mass destruction (which turned out to be a lie) and insisted on invading the country. In many ways, she was also responsible for the invasion of Afghanistan. It is known that she was not peacefully inclined towards Sudan and Angola. And after leaving the post of state secretary, which she occupied from 2005 to 2009, she handed the reins to Hillary Clinton, yet another liberal interventionist who gained notoriety around the world for her joyous “Wow!” upon finding out that Libyan leader Colonel Gaddafi had been murdered.

Although many consider Donald Trump to be the epitome of masculinity, machismo, and a conservative policy that reflects the patriarchy, the gender balance in the ranks of America’s defence industry shows that there has been a dramatic shift towards feminisation since January 2019. And not just in the ranks, but in the higher echelons as well. The CEOs of four of America’s five leading defence contractors are women.

Marillyn Hewson is the chairwoman, president and chief executive officer of Lockheed Martin, which specialises in the production of military aircraft. Phebe Novakovic serves as the chairwoman and chief executive officer of General Dynamics. Kathy Warden was announced as the head of Northrop Grumman (its main products include military aircraft and drones, military laser systems, and missile technology) back in July 2018, and Boeing’s Defense, Space & Security division is also headed by a woman – Leanne Caret.

What’s more, Andrea Thompson was the under-secretary of state for arms control and international security affairs and joined the state department from the US Army.

Incidentally, four vice-presidents of another US military-industrial giant, Raytheon, are also women.

Quite a few also occupy leading positions in a number of special agencies. Anne Neuberger, for example, is the head of the National Security Agency’s Cybersecurity Directorate.

A noteworthy phenomenon is one of the candidates in the 2020 US presidential election, Tulsi Gabbard. As well as working in US Congress, she has served twice in the Middle East and is a Hawaii Army National Guard major.

Margaret Thatcher, nicknamed the ‘Iron Lady’, is also worthy of mention, of course. And she is known not just for her hard-line foreign policy (the war with Argentina over the Falkland Islands and her support for a number of dictatorial regimes in Latin America), but also for the harsh way she treated her fellow citizens. She initiated serious forms of repression against Catholics in Northern Ireland, unleashing a spiral of violence, and she virtually destroyed the union movement in Great Britain. Thatcher will also be remembered for her comment: ‘There is no such thing as society’.

Mention should also be made of Germany’s Angela Merkel and the European Commission’s current president, Ursula von der Leyen. But these people are more in addition to the overall picture.

So how to explain this phenomenon? The most logical seems to be not to focus on gender, but to recognise that both sexes are conduits for the strategic culture of peoples and nations. Given that the imperative of competition has been elevated to one of the highest values in the West, resulting in the justification of conflicts, whether the war is waged by a man or a woman is no longer important. What is important is getting what you want and consolidating the victory.

Feminist and gender theories are nothing more than a sophisticated trick used for political aims. Demands from the West to give more rights and powers to women in other countries with patriarchal traditions are nothing more than attempts to undermine the organisational culture of those countries and weaken their governance and administration. Serbia may serve as evidence of this, where the acting prime minister is an open lesbian who is the technical head of government. But the expected gains from this appointment – particularly better standards of living – have not materialised. Quite the contrary.

As for the military archetype and the involvement of women in conflicts, history shows that they have always played a part. This is evidenced by the article ‘Warrior Women: 3000 Years in the Fight’, which was published in the most recent edition of the US National Defense University’s specialist journal Joint Force Quarterly (93). It cites historical examples of the role women have played in national liberation movements around the world and, directly, as military leaders.

It is now known that women actively participate in Kurdish military units and bear all the hardships of field (or mountain, in the context of political geography) service on an equal footing with men. In Islamic states like Pakistan and Iran, there are a lot of women military personnel and also quite a few women officers in various branches of the armed forces.

But the difference with the women military personnel (or those taking up arms to defend their homeland or for the liberation struggle) in non-Western countries is that they have little influence over decisions related to aggressive actions against other countries and peoples. Whereas in the West, women politicians included in the decision-making process may never hold a gun in their lives, but may be complicit in the murder of thousands and millions of people, justifying it with abstract humanitarian aims and/or national interests.

0 thoughts on “Feminist Militarism As The Face Of Western Politics”