HOME / Politics / Civilization as a Discursive Tool of Western Politics

Civilization as a Discursive Tool of Western Politics 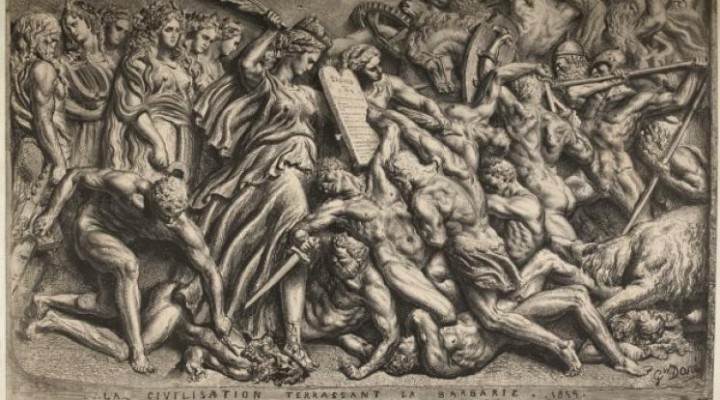 Excerpt from the forthcoming book on Multipolarity.

The notion of civilization was introduced into broad scholarly circulation in the late 18th century by the Scottish philosopher Adam Ferguson, who meant by such a stage in the development of human society characterized by the existence of social classes, cities, writing, and other phenomena. The preceding stages, according to this thinker, were savagery and barbarism. In his Essay on the History of Civil Society, Ferguson remarked: “This progress in the case of man is continued to a greater extent than in that of any other animal. Not only the individual advances from infancy to manhood, but the species itself from rudeness to civilization.”[1] A similar approach was subsequently taken up by many scholars, especially in Soviet times, due to the fact that this view was maintained by Friedrich Engels. This imperative wields influence to this very day, hence such expressions as “civilizational approach”, and “civilized society”, etc. Around the same time, a similar idea was expressed by the English scholar, John Boswell.

The German sociologist Norbert Elias argued that the concept of civilization “expresses the self-consciousness of the West”, and: “By this term Western society seeks to describe what constitutes its special character and what it is proud of: the level of its technology, the nature of its manners, the development of its scientific knowledge or view of the world, and much more.”[2] Elias notes further:

But ‘civilization’ does not mean the same thing to different Western nations. Above all, there is a great difference between the English and French use of the word, on the one hand, and the German use of it, on the other. For the former, the concept sums up in a single term their pride in the significance of their own nations for the progress of the West and of humankind. But in German usage, Zivilisation means something which is indeed useful, but nevertheless only a value of the second rank.[3]

As is characteristic of the German school, Elias shares Spengler’s distinctions between culture and civilization, suggesting that civilization signifies a process or, in the very least, the result of a process. If civilization “plays down” national differences, insofar as the “concept of civilization has the function of giving expression to the continuously expansionist tendency of colonizing groups, the concept of Kultur mirrors the self-consciousness of a nation which had constantly to seek out and constitute its boundaries anew, in a political as well as a spiritual sense, and again and again had to ask itself: ‘What really is our identity?’”[4]

Examining the origins of the contrast between culture and civilization, Elias cites Kant’s 1784 Idea for a Universal History from a Cosmopolitan Point of View, which reads: “The ideal of morality belongs to culture; its use for some simulacrum of morality in the love of honor and outward decorum constitutes mere civilization.” In other words, according to Kant, civilization is a special kind of behavior, even if it is artificially created with the aim of legitimizing social status.

The sociogenesis of the notion of “civilization” is seen analogously in France. “The first literary evidence of the development of the verb civiliser into the concept civilisationis to be found, according to present-day findings, in the work of the elder Mirabeau in the 1760s.”[5] Maribeau wrote:

I marvel to see how our learned views, false on all points, are wrong on what we take to be civilization. If they were asked what civilization is, most people would answer: softening of manners, urbanity, politeness, and a dissemination of knowledge such that propriety is established in place of laws of detail: all that only presents me with the mask of virtue and not its face, and civilization does nothing for society if it does not give it both the form and the substance of virtue.

Concepts such as politesse or civilité had, before the concept civilization was formed and established, practically the same function as the new concept: to express the self-image of the European upper class in relation to others whom its members considered simpler or more primitive, and at the same time to characterize the specific kind of behaviour through which this upper class felt itself different from all simpler and more primitive people.”[6]

This, let us note, means that people from the very same state or nation were seen as backward “barbarians” in the eyes of court-aristocratic and bourgeois circles. If earlier the upper class in all regions of Europe fundamentally opposed the lower strata, the “mobs”, then in the epoch of bourgeois revolutions, the idea appeared that all of society could be “finished up” and led to the state of “civilization.” It was often under this idea that the bourgeoning bourgeoisie fought against caste restrictions and everything that might interfere with their trade and interests. “The consciousness of their own superiority, the consciousness of this ‘civilization’, from now on serves at least those nations which have become colonial conquerors, and therefore a kind of upper class to large sections of the non-European world, as a justification of their rule, to the same degree that earlier the ancestors of the concept of civilization, politesse and civilité, had served the courtly-aristocratic upper class as a justification of theirs.”[7] Thus, Elias argues that “civilization” was needed by the West in order to extend its power and influence to other regions of the world through a system of coercion and subordination in various forms. He emphasizes: “In this way civilizing structures are constantly expanding within Western society; both the upper and lower strata are tending to become a kind of upper stratum and the centre of a network of interdependencies spreading over wider and wider areas, both populated and unpopulated[8], of the rest of the world.”[9]

The “spread of civilization” is therefore the penetration of Western institutions and behavioral standards into other countries. Non-Western countries can voluntarily join this process insofar as they see the need for their own survival, the point of which is not only the borrowing of technical skills, but also forms of “civilized” behavior which allow them to enter the network of interdependencies. But the center of this network remains occupied by the people of the West.

In fact, what Norbert Elias was describing is what is now called “globalization”, although the latter author arrived at these conclusions in the interwar period. In the present time, criticisms of Western civilization in its “exclusive form” have only intensified. For example, Raymond Aaron notes that “suspected, explicit racism could not endlessly resist the opening up of the greatness of other civilizations or the obvious fragility of European supremacy.”[10] Hamid Dabashi from Columbia University argues that the idea of Western civilization was for European nations a kind of umbrella structure asserting the universal identity of European national cultures and to “unify these cultures against their colonial consequences.” Dabashi thus surmises:

Islamic, Indian, or African civilizations were invented contrapuntally by Orientalism, as the intelligence arm of colonialism, in order to match, balance and thus authenticate ‘The Western Civilization.’ All non-western civilizations were therefore invented exactly as such, as negational formulations of the western, thus authenticating the western. Hegel subjected all his preceding human history into civilizational stages leading to the Western Civilization, thus in effect infantilizing, Orientalizing, exoticizing and abnormalizing the entire human history…[11]

0 thoughts on “Civilization as a Discursive Tool of Western Politics”