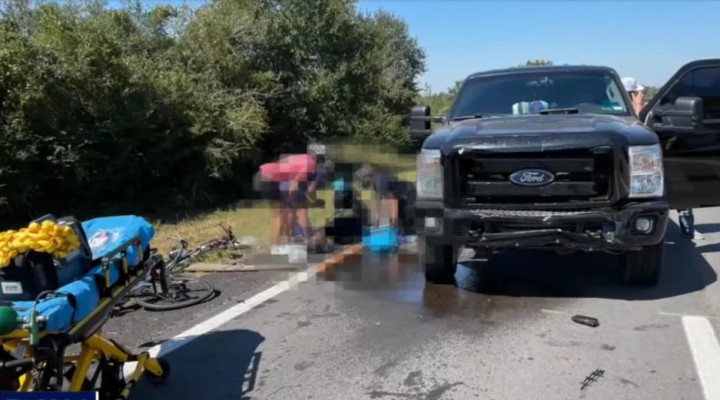 The Waller County District Attorney’s Office announced the charges on Monday, about six weeks after the “rolling coal” incident happened

WALLER COUNTY, Texas — Charges have been filed against a 16-year-old who is accused of driving his truck into a group of cyclists in Waller County earlier this year.

The 16-year-old driver that hit cyclists in Texas while rolling coal has been charged with six felonies over the incident.https://t.co/bJ6iEQDsVu

The Waller County District Attorney’s Office assigned its own investigators to find out what happened and to determine if charges were warranted.

Witnesses claim the teenager was taunting the pack of bicyclists with his truck, trying to spew exhaust over them. https://t.co/S9qjFluvsX

On Monday, The DA’s Office announced the driver would be charged with six counts of aggravated assault with a deadly weapon, one count for each cyclist injured. Three of them were seriously hurt, according to an attorney representing them.

“Rolling Coal” might be limited to the US. Some truck drivers get in front of Teslas and practice it. It is illegal in many states, but not in Texas! #ElectricVehicles #Tesla
Here is an example: pic.twitter.com/CaTBq0USq8

A witness said the teen was taunting the cyclists by “rolling coal” — or blowing exhaust smoke — as he passed them on Sept. 25. He then hit the cyclists who were in front of him. The teen stayed at the scene and spoke to police, but was released and wasn’t charged.

The District Attorney’s Office said the case was not handled appropriately by investigators and they chose not to reach out to the office when advised to do so.

Authorities said the teen surrendered on Monday after the charges were filed. His name hasn’t been released because he is a juvenile.

Waller Police Chief Bill Llewellyn agreed that the situation was mishandled but denied that it had anything to do with the driver’s connections. The DA’s Office had previously said the teen has connections to Waller city officials. Authorities said there’s no evidence the teen’s connections played a role in the investigation.