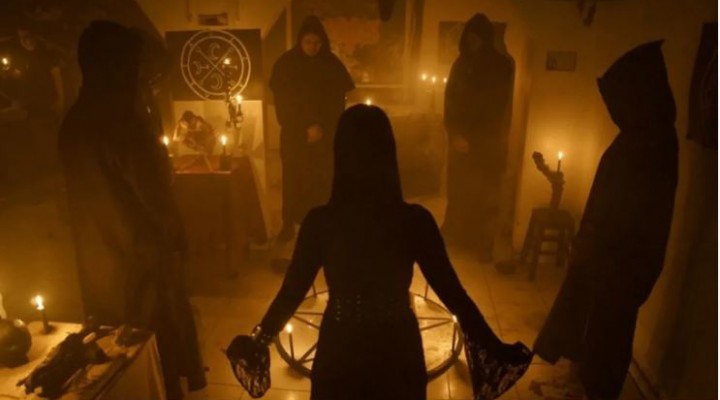 World events have abandoned any concept of reason or reality.  Nuclear war is now seen by many, perhaps most, as inevitable.  Insanity and injustice are flourishing and humanity will either end or the mechanisms that make up our world as we know it must grind to a halt.

No side even cares to bring God into the equation anymore.  Third Reich occultism is reborn in not just Ukraine but across NATO and the EU.  Extremist minorities in the US and across Europe are being empowered to establish a monstrous world order characterized by something far darker than simple tyranny.

There are milestones.  Former Vatican exorcist Malachi Martin, in his NY Times bestseller Keys of Blood addresses the issue of inherent evil invading Europe and the Christian world:

Most frighteningly for [Pope] John Paul [II], he had come up against the irremovable presence of a malign strength in his own Vatican and in certain bishops’ chanceries. It was what knowledgeable Churchmen called the ‘superforce.’

Rumors, always difficult to verify, tied its installation to the beginning of Pope Paul VI’s reign in 1963. Indeed Paul had alluded somberly to ‘the smoke of Satan which has entered the Sanctuary’. . . an oblique reference to an enthronement ceremony by Satanists in the Vatican. Besides, the incidence of Satanic pedophilia — rites and practices — was already documented among certain bishops and priests as widely dispersed as Turin, in Italy, and South Carolina, in the United States. The cultic acts of Satanic pedophilia are considered by professionals to be the culmination of the Fallen Archangel’s rites.

Martin, primary advisor to Pope John XXIII, believed “Luciferian Freemasonry” was behind the darkness he believed would envelop humanity.

Adding credence to this, the heavily censored Presidio scandals that outlined how Luciferian forces, followers of Moloch/Baphomet, the demonic entity behind Freemasonry, has infiltrated the military, particularly the military academies in the US during the 1980s.

When the scandal spread across the entire US military, ritual child abuse and satanic “covens” in the Pentagon, the story suddenly “went dark.”

Then we stumble over an attempt by rogue military units to start a nuclear war.

Insider sources tell a very different story of the 2007 Barksdale/Minot incident than given the general public.  A B-52 fully loaded with nuclear weapons was hijacked for “places unknown” but caught and brought back to the US where the story ends and the lies begin.

But then 9/11 happened.  This is the United States where the then largest buildings in the world “dustified” from low temperature kerosene fires caused by plunging aircraft.  For decades, pilots, architects and engineers have been telling everyone that would listen that the entire story is insane but then what isn’t nowadays.

No planes can fly like that, fires don’t bring down steel buildings and steel doesn’t turn to dust unless acted upon by forces only seen inside of a star in the natural world.

Today, the world is suffering from circumstances never imagined.  Yes, there is worldwide inflation and corporate profits are soaring from massive price increases even where no increase in costs is involved.

No government in the collective West has addressed this vital issue though there is historical precedent.  From Wikipedia:

Nixon issued Executive Order 11615 (pursuant to the Economic Stabilization Act of 1970), imposing a 90-day freeze on wages and prices in order to counter inflation. This was the first time the U.S. government had enacted wage and price controls since World War II.

Even Biden’s request for increased taxes on American oil companies, a move made days before a national election, fall well short.

At the time Nixon acted, the US had entered the 1973 Yom Kippur War on behalf of Israel.  The supposed response to that was an oil embargo against the US but what really happened?

Overnight, food prices increased by up to 40%.  The reason?  Corporate profits.

This brings up one minor question, albeit conspiratorial in nature.  Are world events manipulated by powerful individuals behind the scenes as alleged by former US President Donald Trump, in order to manipulate markets, rob investors and impoverish the world?

Was the 2007-8 Bush era economic collapse in the US one of these?

Was COVID one of these as well?  Evidence is piling up that supports this hypothesis.

Then, next, we ask: What kind of person would do these things?

This is where we begin to name the illness.  Common sense tells us that it can’t simply be about money and power.  But what else is there?

No one will say this but it is true just the same.  Those behind the 2014 coup in Ukraine are also behind the current war.  The same names, Noodleman/Nuland, Kagan, Wolfowitz and a list of mysterious American billionaire oligarchs helped put 9/11 in place, the Maidan coup but also the other colour revolutions and that list is considerable.

They call themselves Neocons but, in reality, they are something else and they serve masters beyond our understanding and certainly beyond any human rationality.

That this group shares a common religion with the leadership of Ukraine is a very dangerous subject.  Discussing these issues openly can get anyone “cancelled” and, in fact names like Elon Musk and Kanye West are only two of dozens that face that same fate today.

But is it about a religion of the book like Christianity or Islam or are there those who hide behind religion and a long history of ethnic injustice?

It was former CIA officer Robert David Steele who was doing the research on America’s occultist oligarchs, a group he called MEGA.  When Trump moved the US embassy in what can only legitimately be called Palestine to Occupied Jerusalem in violation of Article IV of the Geneva Convention, it was a $100,000,000 payment from an alleged MEGA oligarch, gambling boss Sheldon Adelson that brought this about.

That same payment brought an abrupt and illegal end to the nuclear deal with Iran as well.

Steele believed it was MEGA that financed 9/11 and used their massive political clout in Washington to blame non-existent terrorists like the CIA’s longtime asset Osama bin Laden.

A key issue is the MEGA agenda whose interests threaten human survival.

To help us get started, let us remember that it was the same media that lies about Ukraine every day, childish lies, that told us that it was the Taliban flying opium and heroin around the world using their mysterious and imaginary air force.

If one wanted to look, one could note that Boko Haram (banned in Russia) militants who shun all education and technology now drive across the Sahel in Israeli modified Toyota “technicals” and use satellite telephones registered to the Pentagon.

Current political theories no longer describe the world today.  Trying to make sense of the policies of the US and UK, blowing up gas pipelines serving their own allies or quite purposefully fomenting nuclear war, you can’t make sense of that.

Then you look at the war from day to day, the Ukraine War that has been going on year after year and something is very wrong.  Is Ukraine losing 1000 men a day?

Who would allow that or the total destruction of “their own” country unless, of course Zelensky has no interest in Ukraine at all except for the purpose it serves a broader evil agenda. I fought as a Marine in Vietnam.  The US lied about its casualties there as well with entire units wiped out by the North Vietnamese and nary a word reported.

Later when 1.6 million American veterans died of diseases related to Agent Orange poisoning, and that is the real number, there was collective silence.

We knew we were somewhere new when news reports came in.  It began with the Bucha massacre.  It still hangs over us all, as we watched Zelensky’s henchmen spread out the bodies in the road, some gravely wounded yet still alive before the film crews came.

Even then, the collective West and the mainstream media not only looked away, they came after any who commented, who re-Tweeted, who published and not just with computer hacks.

There were threats, there were secret arrests and there were killings, journalists, activists all disappeared as though we were in Argentina or perhaps Greece during the civil war so many years ago.

But did it begin there?  Anyone remember MH17?  After the terrors of Melitopol, not just 2014 but the Nazi butchery of the current war, how could anyone doubt that those who were directly under MH17 with air defense systems, the Nazi butchers of Maidan, of Odessa and Melitopol, would down an airliner as well?

Russia has always been a target.  Alleged founder of the MEGA oligarchs in America, Jacob Schiff (1876-1958), aided by his banking friends that ruled England, built the Japanese navy and unleashed it on Czarist Russia in 1904.

Schiff virtually ruled the United States during his lifetime with presidents kowtowing to his every wish.

Short years later, it was Schiff, aided by Paul Warburg, founder of the Federal Reserve system and alleged architect of World War I and Max Moritz Warburg that played a pivotal role in the manipulation of world events that led to World Wars I and II.

A trail of suppressed scholarship ties these entities, the precursors to today’s MEGA, to 15th century Iberia, the founding of the Jesuit sect and the spread of Freemasonry.

From Iberia, they spread to Venice, establishing the first European banking empires, then to Salonica through which they gained control over the Ottoman Empire and, simultaneously, to Germany, then the Netherlands and Britain.

Tendrils of power spread both to Europe and North America but also follow the collapsing Ottoman Empire and establishing throughout the Middle East, manifesting as ISIS and al Qaeda (both banned in Russia) but also other terror organizations as well.

In Europe, the NATO plan under Operation Gladio, an open partnership with Freemasonry, led to 3 decades of terror bombings and even the kidnapping and murder of Italian Prime Minister Aldo Moro.

Notwithstanding the Spanish/Portuguese assault on the New World, it was our Freemasonic brethren that may well be responsible for the corporate driven colonial era that continues to define a world of injustice today.

Decades of falsified and censored history leave us helpless in establishing the real motives of those who have placed themselves at odds with humanity.

Behind it all, powerful beliefs in the occult, in old gods, embracing evil and diminishing the value of the human condition.

0 thoughts on “Exclusive: The Dark Occult World Behind Ukraine”