HOME / SOCIAL/CULTURAL / Exclusive/Blockbuster: The Nasty Truth Behind Trump, the Supremacists and their Kosher Nostra Masters

Exclusive/Blockbuster: The Nasty Truth Behind Trump, the Supremacists and their Kosher Nostra Masters 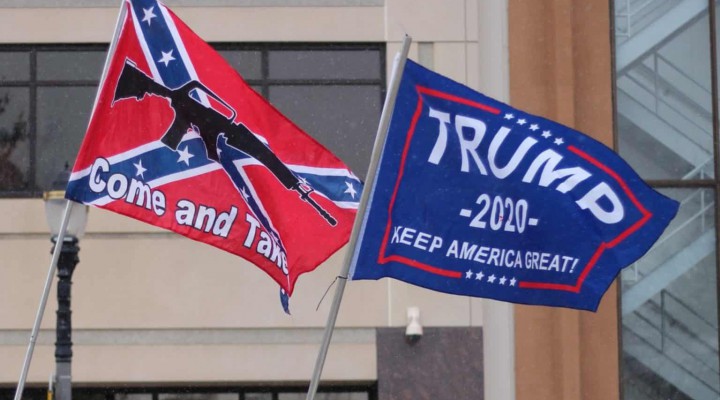 VT: Tracing those who run things from the shadows is a task generally assigned to those working for the centuries old criminal cabal that pulls the strings everywhere.

Long before the Oath Keepers or GOP, ostensibly under the flag of “Freemasonry,” a Phoenician/Luciferian death cult, world organized crime formed the criminal states that preceded Israel, Genoa and Venice, Salonica, the Ottoman Empire, the Vatican, the Netherlands and later Britain under William of Orange.

Early on in the US, they were the Federalists even as they are today in the modern iteration.  Vice President Aaron Burr killed Alexander Hamilton to stop them but the Federalists still burned the White House in 1814, aided by the British.

This is history withheld but history none the less. They tried it again on January 6, 2021.

The US was seen as a vast playground.  Andrew Jackson fought to stop them, so did Lincoln.  They wrote the constitution, with European banks controlling the Senate and Supreme Court and, as the nation moved West, setting up fake states with fake senators and fake legislatures, all owned by speculators, cattle, rail, gold and silver.

European banks owned the entire west, its rails, its governments, forming state after state with no people while ethnically cleansing the indigenous population and sweeping the prairies of bison as well.

With control of the NUMBER of states, even with no population, they controlled elections past the fake electoral college.  The “hammer” is the “one state/one vote” presidential election when it goes to the House of Representatives.

Montana has the same vote as New York, Florida or California, in pure violation of the equal representation provisions of the Constitution.  In order to bury that problem, the Supreme Court has been stacked, over and over, as it is today.

The enemy was the AFL/CIO and trade unions, the only groups powerful enough to stand against the Kosher Nostra.  To kill them, the Kosher Nostra eventually turned to Reagan and the Bush family, the US had to be deindustrialized and her cities destroyed.

Through the 1920s, the Kosher Nostra set up a private army under the Klan.  Fred Trump was a “capo” in the New York “klan,” really an offshoot of the Jewish mob.  (See “Once Upon a Time in America)

Their partner was the American Legion.  Standing against them was the VFW.  The Legion, aided by the Klan and Pinkertons, fought against unions, aided in state after state by the corrupt National Guard and later by J. Edgar Hoover’s mob controlled FBI.

So many groups were added, the ADL/AIPAC, the National Rifle Association, the National Association of Manufacturers, the American Enterprise Institute, the US Chamber of Commerce, all Kosher Nostra fronts, all arms of Rothschild power.

Here is what VT has found; intelligence services from these nations, Turkey, Saudi Arabia, Ukraine, Georgia and Israel behind the possible development and dissemination of the COVID virus.

Aiding them are Evangelicals in the US Department of Justice, the Pentagon, Homeland Security and the NSA, who formed the cabal that planned to overturn the election on January 6 and before.

This group rigged the 2016 election.  We can prove it.

The FBI has met with us, gone over our findings and presenting their own, at length.  They say Putin is behind it all.  Their evidence is compelling, we have seen it.  They describe a secret Washington underground of “fake people”…for lack of a better term, infiltrated into the US over decades, some immigrants but some “replacements” like the rumors about the Bush family.

If this is correct, this process began at the same time Warburg sent Lenin to St. Petersburg.  It all began with Jacob Schiff starting the Russo-Japanese war.  Take time, learn about this and who the money players in the US really were, not just Astor and Dupont.

A similar destabilization effort by Warburg/Schiff/Rothschild was going on against the US, pushing the US into WWI, founding the Rothschild owned Federal Reserve and pushing through the Balfour Declaration.

Imagine what Lenin would say today if he saw Sputnik News and its love affair with Big Pharma and the Banksters.  The sound of him rotating in his crypt would have the tone of an Indy car heading down a straight-a-way.

The cash behind so many things, anti-vaxx along with the Nazi extremists comes, as we have found, from two key areas.  One was discovered by Robert David Steele.  He was investigating MAGA, a group of Jewish billionaires, some extremist, others pushed into paying their way, who he believed funded terror attacks inside the US along with many key political races as well.

Some are visible supporters and friends of Donald Trump but almost all have direct ties to him through New York organized crime or other narcotics and human trafficking efforts that use his hotels, casinos and golf courses along with other real estate holdings.

Trump’s luxury condominiums are a haven for organized crime including peddling “birth tourism” deals to Kosher Nostra mobsters so that their kids and the children of their mistresses can give birth in Miami hospitals while living in Trump properties.

In tracking down the cash, along with RDS, we found money flowing in from two major cosmetics companies, the world’s largest casino operator, the owner of lingerie stores in malls, a manufacturer of shelving units, a pillow maker, an online ‘restock’ hustler…we could go on forever.

Worse still, however, is that we have also traced, and Steele did much of this work as well, those who paid for 9/11, some big money Democrats too, funding extremism around the world.

We are stopping here and finishing with the current “dead on arrival” investigation that will go nowhere.

Daily Beast: Organizers of a deadly 2017 white supremacist rally had “private funding,” allowing at least one to make hate a “full-time” job, exhibits in a bombshell lawsuit suggest.

In August 2017, a coalition of far-right figures marched on Charlottesville, Virginia, during “Unite The Right,” a two-day fascist festival. The event ended in catastrophe when a neo-Nazi drove his car into a crowd of counter-demonstrators, murdering one and injuring others.

Survivors of the attack filed a sweeping lawsuit (Sines v. Kessler) against Unite The Right’s organizers, who have attempted to distance themselves from the event’s bloodshed. But a tranche of more than new 3,000 exhibits, entered by plaintiffs last week, suggest that Unite The Right’s organizers collaborated closely on the event, even running their own “nonprofit” groups for funding.

Sines v. Kessler is scheduled to go to trial next month. An exhibit list filed last week includes descriptions of documents, but not the full text of the evidence.

The list includes more than 3,000 exhibits, including text messages between white supremacist leaders, legal documents from far-right groups, and medical documents from car attack victims (following the deadly attack, figures on the right launched conspiracy theories about the victims’ injuries). Integrity First for America, the nonprofit group leading the lawsuit, declined to comment on the exhibits.

Defendants in the suit have previously attempted to downplay their culpability in Unite The Right’s chaos, describing the rally as loosely organized and not intentionally violent. But text messages to and from defendant Elliott Kline, a key Unite The Right organizer, suggest significant coordination and funding.  Read more…

0 thoughts on “Exclusive/Blockbuster: The Nasty Truth Behind Trump, the Supremacists and their Kosher Nostra Masters”