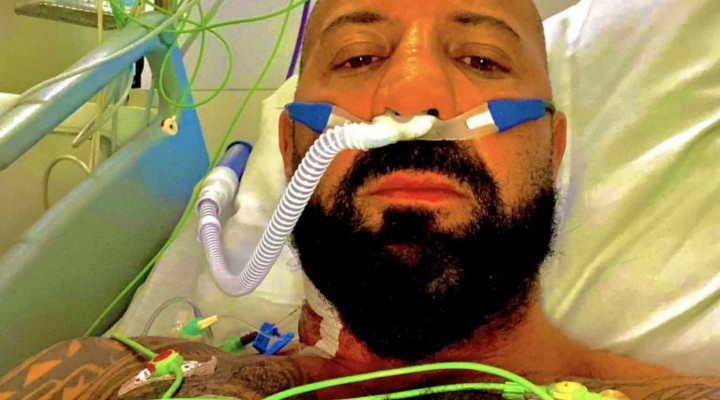 DB: A world champion kickboxer has died from complications caused by COVID-19 just weeks after he discharged himself from the hospital. Frederic ‘The Undertaker’ Sinistra, 41, died at his home in Belgium earlier this month, according to local outlets.

A three-time world champion kickboxer died at his home in Belgium from complications caused by COVID-19 weeks after discharging himself from the hospital.⁠ Fred Sinistra, 40, was unvaccinated and would not even use the term COVID-19, his coach Osman Yigin told a Belgian outlet. pic.twitter.com/z9eTeJfxtF

An unvaccinated heavyweight fighter, Sinistra refused to use the term COVID-19. His coach, Osman Yigin, said he’d forced the athlete into the hospital after he contracted the “little virus,” as Sinistra liked to call it. From inside an intensive care unit in Liège, Sinistra posted updates on social media, maintaining, “A warrior never abdicates!!!!!!

Fred Sinistra was a champion kickboxer, extremely tough and strong, but he was unvaccinated and just died of covid at age 40, leaving his two children without a father. I’m not celebrating it. It sucks. Don’t take the risk. pic.twitter.com/sVRYaCKLjL

A COVID-Denying Kickboxing World Champion Just Died From COVID https://t.co/XcveEzW1Z4 via @vicenews
Fred Sinistra, 40, was unvaccinated and would not even use the term COVID-19. Instead, he dismissed COVID-19 as “a little virus” and railed against government restrictions.

I will come back even stronger,” even as he acknowledged the inflammation in his lungs was 33 times greater than a healthy level. He went home days later and reportedly began to treat himself with oxygen. His partner announced his death on his Facebook page on Dec. 16.

Frederic ‘The Undertaker’ Sinistra, an unvaccinated world champion kickboxer, has died from complications caused by COVID-19 just weeks after he discharged himself from the hospital. https://t.co/NjtOfveU5s