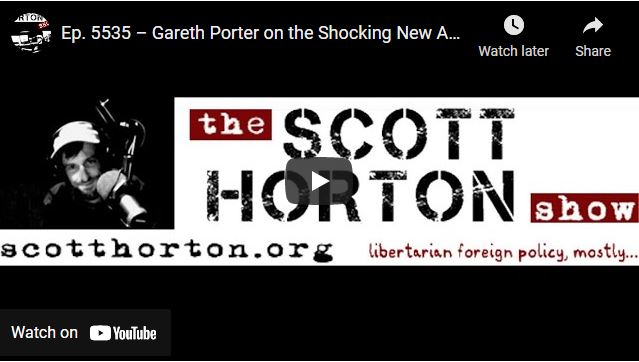 Scott interviews Gareth Porter about his coverage of a recently-released document liberated by Daniel Ellsberg when he originally leaked the Pentagon Papers in the 1970s.

This document, Porter explains, shows how in 1958 the military wanted to use tactical nuclear weapons against China over the offshore islands crisis.

It was only Eisenhower’s intervention that stopped the Joint Chiefs from going ahead with the plan, though ironically, it was Eisenhower’s own efforts to combat the military-industrial complex by reducing conventional military forces that helped lead to an increased focus on nuclear weapons as a primary military tool in the first place.

Ellsberg has released this document because the idea that the U.S. might go to war with China over Taiwan has thrust this issue to the fore once again. Nuclear brinksmanship, he says, remains one of the greatest threats not just to American national security, but to the very survival of the human race. The idea of an all-out war with China as in any way a legitimate possibility must be vehemently opposed before we ever come to the point of using nuclear weapons again.

0 thoughts on “Ep. 5535 – Gareth Porter on the Shocking New Account of the Taiwan Straight Crisis”