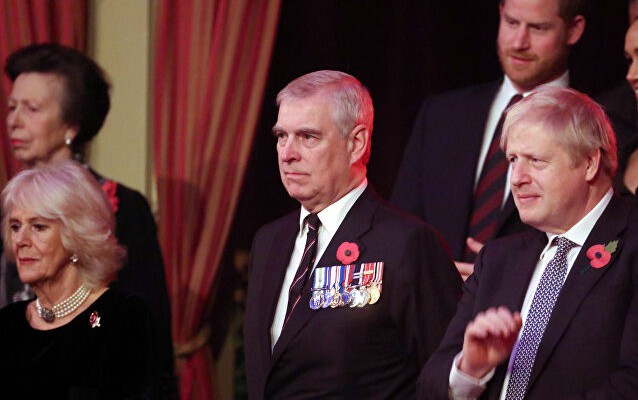 What was this British royal and his PR aides thinking of when he granted a high-profile interview to the BBC, supposedly to clear his name from association with sex-trafficker billionaire Jeffrey Epstein?

Prince Andrew, the nearly 60-year-old younger brother of heir to the British throne, Charles, has reportedly told friends and family that the interview aired at the weekend was a “great success”.

In it, the British royal blankly denied having sex with underage girls supplied to him by the convicted pedophile Epstein who reportedly committed suicide in August while in custody in a US prison. The denials were in spite of the facts that Prince Andrew stayed with Epstein in his New York City mansion in the early 2000s and on his private Caribbean island notorious for sex parties.

In a sign of how detached from reality this scion of the British monarchy is, the general public reaction to the interview was a torrent of derision and disgust. Former royal PR aides called it not a car crash, but “an articulated lorry crash” performance. Far from clearing his name from years of persistent media suspicions of culpability in Epstein’s sordid crimes, Prince Andrew has left himself open to prosecution from his own self-indicting words and evasions.

“Prince Andrew is not entitled to any form of immunity by virtue of his position as a member of the royal family,” said one legal expert, as reported by the Independent newspaper.

“His friendship with the convicted sex offender Jeffrey Epstein is under investigation by the FBI and he is vulnerable to extradition,” the expert warned.

The answers he gave to the BBC interviewer were rife with implausibilities and contradictions. His repeated claims of having no memory of events or of alleged sex victims or knowledge of Epstein’s “unbecoming” behavior (classic aloof royal understatement) were contrasted with his laser-like memory of an alibi he cited of being at a pizza restaurant in England with his daughter 18 years ago – on the same day it is alleged he raped a 17-year-old girl at a house in London belonging to Epstein’s madame-procurer Ghislaine Maxwell. A photo of the meeting was denied by Andrew, hinting that it was a fake.

But perhaps the most telling contradiction was his claim that he visited Epstein in New York in 2010 – after Epstein was released from prison for trafficking a minor for prostitution – in order to terminate his friendship.

During the visit, he was photographed having long and serious chats with Epstein while strolling around Central Park. Was this to find out how vulnerable the royal was from potential scandal fall-out?

He instead told the BBC interviewer: “I took the judgement call that because this was serious, and I felt that doing it [breaking their friendship] over the telephone was the chicken’s way of doing it, I had to go and see him and talk to him.”

Oh how very noble and principled of Prince Andrew! How chivalrous! The rectitude is so royal as befitting a member of the British Realm. However, all this purported meticulous effort to terminate his friendship with Epstein contradicts his claim in the same interview that the pair were “not close”.

His seeming principled concern about conducting personal relations punctiliously stands in stark contrast to Andrew’s otherwise “lack of remorse” or “sympathy” with the victims of Epstein’s sex abuse empire, as expressed in the BBC interview.

Lawyers for Epstein’s victims who are suing his estate will find the interview given by Prince Andrew a treasure trove of material for further questioning by prosecutors. His interview on state-owned BBC is tantamount to self-indictment, and the US lawyers are demanding the FBI summon him for questioning.

It is astounding that the prince went ahead with the interview despite advice from several former royal PR aides not to do so, for fear that the anticipated media fiasco would inflict disaster on the British monarchy. His mother, Queen Elizabeth, was said to have been disapproving of the idea.

It is testimony to how out-of-touch and arrogant the pampered, no-work, publicly-funded royals are.

Andrew claims that when he flew Royal Navy helicopters during the Falklands War (1982) with Argentina, he came under intense enemy fire. The experience allegedly resulted in him losing the physiological function of his body sweating.

The former pilot may soon be in for a lot more dangerous flak. Let’s see if he can keep his royal pants dry this time.