HOME / WORLD / Nuking Itself… How Russophobia Led the U.S. to Bomb its Own Citizens 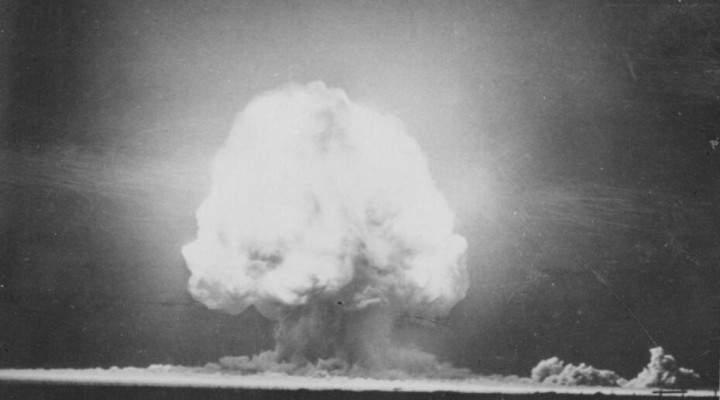 The barbarity of what happened in New Mexico 75 years ago is alive and well. If it can be inflicted without apology on American citizens, then what does that say about the danger to the rest of the world?

Generations of countless Americans have been contaminated and sickened by the first-ever atomic bomb test. The Trinity explosion on July 16, 1945, was carried out in the New Mexico desert. Three weeks later, two A-bombs were dropped on Japan, killing up to 200,000 people.

But the number of American victims caused by radiation fallout from the Trinity test is reckoned to be also imponderably high. The American government conducted the explosion in secret, unbeknownst to the population of New Mexico. That was in spite of warnings from Manhattan Project scientists of a high risk to public health from the extreme radiation. Without a warning to the public and because of a cover-up about the event, countless Americans were exposed to carcinogenic radiation.

In a recent interview with Karl Grossman, New Mexican resident Tina Cordova tells how her community has been campaigning for decades to find out the truth behind the Trinity test and to seek reparations from the federal government. Incredibly, there has never been a federal investigation into establishing the human health impact from that atomic test explosion. But Cordova and her community estimate that the number is huge. She is the fourth generation in her family to have suffered from cancer. Countless others tell of high numbers of infant mortality over the decades and other morbidities that stretch across the entire state of New Mexico.

A combination of factors conspired to wreak a heavy toll on the people of New Mexico. It is one of the poorest states in the U.S., with large numbers of native Americans and Latinos. In selecting the test site for the A-bomb, there was a tacit racism among planners in Washington who viewed the area and its population as expendable. By not warning the people of the explosion, local populations were given no chance to take protective measures such as evacuation or avoiding consumption of contaminated water and food produced from the soil. The people were deceived into continuing their livelihoods as normal following the explosion, drinking contaminated water and breathing radioactive air. The New York Times was instrumental in the cover-up, issuing reports that the explosion was due to a conventional munitions incident. It was only after the horrific bombings of Hiroshima and Nagasaki on August 6 an 9 that the people of New Mexico realized what had really happened at the Trinity site. Even then they were kept in the dark by Washington stonewalling about the event for decades to come.

Still another factor that maximized the damage on public health was the rush by the American government to weaponize the A-bomb technology. As Karl Grossman points out, the rationale behind the Manhattan Project was said to be to preempt Nazi Germany. But by July 1945, Nazi Germany was defeated and imperial Japan was on its knees. The inescapable implication is that President Harry Truman and the Pentagon wanted to display the new awesome weapon of mass destruction to the Soviet Union in what would be a chilling demarcation of the postwar globe according to American power.

Truman eagerly awaited the news of the Trinity test while attending the Potsdam allies’ conference in Germany along with Britain’s Winston Churchill and the Soviet Union’s Josef Stalin. On receiving news of the successful explosion, Truman immediately adopted a more strident attitude towards Stalin. In that moment, a new Cold War was born.

Thus, it was Russophobia among the American ruling class that rushed the Trinity A-bomb explosion, even though that event would lead to generations of American citizens stricken with fatal diseases from the fallout. In a very real and frightening way, the U.S. rulers took a decision to “nuke” their own people such was their obsession with confronting the Soviet Union.

Subsequent U.S. nuclear weapons testing in the 1950s and 60s was conducted in remote areas of Nevada and in the Pacific Ocean. Those tests also took a deadly toll on the environment and local populations on Pacific islands.

But the recklessness and callous conditions of the New Mexico test is unparalleled in the toxic exposure it imposed on unsuspecting populations.

The stone-cold willingness to, in effect, bomb its own citizens by the federal government is a shuddering testimony as to the nefarious lengths the planners in Washington were prepared to go in their obsessive Russophobia.

When we survey the relentless fixation today in Washington and the U.S. political class with blaming Russia for all sorts of alleged malign intent, one can easily discern that this endemic Russophobia among America’s rulers has not waned.

The barbarity of what happened in New Mexico 75 years ago is alive and well. If it can be inflicted without apology on American citizens, then what does that say about the danger to the rest of the world?

0 thoughts on “Nuking Itself… How Russophobia Led the U.S. to Bomb its Own Citizens”