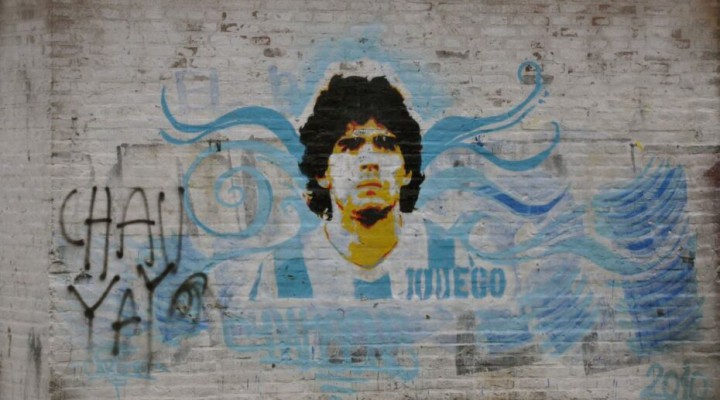 Maradona was fearless in keeping politics in the game through his courageous solidarity with victims of oppression. He never flinched from using his exquisite skills for the cause of justice and peace.

Football legend Diego Maradona who died this week aged 60 will be remembered by billions of sports fans around the world for not only his almost-divine prowess on the field but also his fearless solidarity for oppressed people.

He was a working-class hero in the positive sense. Born dirt-poor in a barrio outside Buenos Aires, Maradona rose to become a soccer legend whose skill on the ball awed the world. Commentators remarked that the ball seemed to be “sewn to his feet” such was his balletic dexterity.

Maradona played in four World Cup tournaments but it was the 1986 games in Mexico where he shone like a god at the age of 25. As team captain and striking midfielder wearing the number 10 shirt, Maradona was the catalyst for Argentina winning that tournament. In a series of matches of breathtaking performances, he took the side to victory in the final against West Germany.

But it was the earlier quarter-final match against England which immortalized the kid from the barrio. Memories of the 1981-82 Falklands War were still raw when the Argentines were defeated by Margaret Thatcher’s Britain. Maradona exacted sweet revenge, routing the England side like second-raters and outshining them with sheer Latino brilliance. Yes, he did infamously cheat with his first goal, flicking the ball past the England keeper in a feint for a header. The goal stood, however, because the referee didn’t see the foul, despite protests from the England team. Then four minutes later, the Argentine dynamo demolished his critics with a second goal that many believe to be the best-ever in football history. He took the ball from deep in his own half and dribbled past at least five England defenders over a 70-meter run, shimmying past the goalkeeper and whipping the ball into an empty net. With characteristic cheek, Maradona later said the first goal was due to the “hand of God”. Few would object.

At only 1.65m (5ft 5in) in height, and despite his magical weaving skills, Maradona incurred debilitating injuries from repeated rough tackles. This was before the modern-day practice of protective refereeing. Those injuries led to a dependence on painkiller drugs which Maradona also enhanced with excesses of alcohol and cocaine. He was a footballing deity after all and was living on top of a pedestal. After his 1986 World Cup success he went on to achieve stunning victories for Italian club Napoli. In was during this period, it is said the legend got involved with narcotics and other inner demons.

But the beautiful thing about him was he never forgot his roots in grinding poverty. As one of eight children he grew up in slums with no running water or electricity. In his later life, despite his fame, he always identified with the world’s poor and oppressed. It was the reason why the poor south of Italy Napoli supporters adored him for his brotherly appreciation and, of course, for taking them to victory against the rich clubs in the north.

Maradona once said: “I hate everything that comes from the United States. I hate it with all my strength.”

He revered his Argentinian compatriot and the revolutionary leader Che Guevara. He also befriended Fidel Castro and proudly called the Cuban leader as his “second father”. He lived in Cuba for extended periods and received crucial medical treatment to alleviate his ailments.

Maradona championed other socialist causes too. He was an outspoken supporter of Venezuelan leader Hugo Chavez. He denounced American wars in the Middle East and would say that in his heart “he was Palestinian”.

He consciously used his worldwide football fame to highlight the cause for justice against the crimes of the Yankee empire. One supposes that his heroic struggle on the field was a reflection of his own conviction about the wider struggle for human liberation from oppression. His passion and inspiration was an extension of the fight for justice.

Maradona fought the good fight with the heart of a lion. But that brave heart gave out this week. He had suffered from health complications over many years and the battles eventually took their toll. Argentina has announced three days of national mourning and around the world this week there will be a minute’s silence before all games.

Football fans of all stripes place the Argentinian maestro first among equals in the sporting stars: Johan Cruyff, Pelé, Garrincha, George Best among others. Modern-day luminaries Lionel Messi and Cristiano Ronaldo offered their heartfelt condolences and respect for their hero.

If football is the reputed universal “game of the people” then Diego Maradona is the sport’s fitting icon. He was a man of, and for, the people. To those hypocrites who piously admonish that politics should be kept out of sports (while using every opportunity to score political points against opponents when convenient) Maradona was fearless in keeping politics in the game through his courageous solidarity with victims of oppression. He never flinched from using his exquisite skills for the cause of justice and peace. That’s why above all the other sporting stars, he is loved by so many billions around the world.

Maradona: the fragile god of the Global South