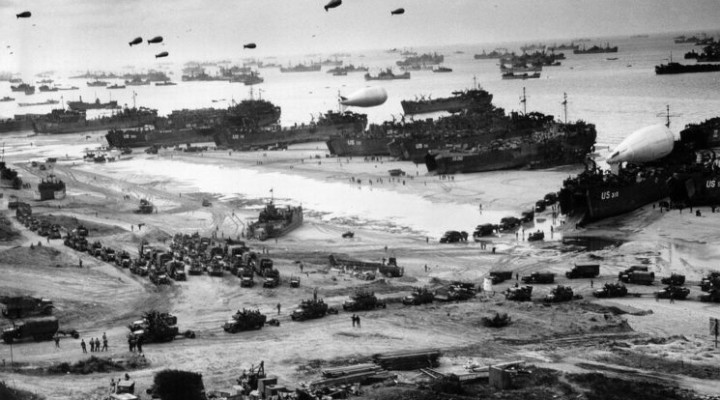 Stealing the laurels of victory was a necessary act of treachery by the Western powers in order to facilitate their Cold War against the Soviet Union. The same treachery continues today as Washington and its NATO allies try to wage a new Cold War against Russia.

US President Donald Trump called it the “greatest battle ever” while attending a 75th anniversary ceremony this week to mark the Western allied invasion of Nazi-occupied France.

Trump was joined by Britain’s Queen Elizabeth II and leaders from 15 other nations in the British harbor city of Portsmouth from where allied troops embarked for the beaches of Normandy on June 6, 1944.

Looking back, Operation Overlord was indeed a huge military and logistical undertaking. Some 150,000 troops from the US, Britain and Canada, among others, crossed the narrow English Channel in 7,000 vessels. It is recorded as the biggest military land invasion from sea.

Allied forces were met by Nazi firepower as they stormed the Normandy beaches. But in truth the Nazi defenses were easily overwhelmed. That’s largely because Hitler had already shifted the best fighting units months before to the Eastern Front where the Third Reich was really in a war for its survival against the Soviet Red Army. The D-Day casualty figures would attest that American, British and German deaths from the brief battles in Normandy were of the order of 10,000. Meanwhile, on the Eastern Front the casualties on both the German and Soviet sides were hundred-fold more, in the millions.

When the D-Day invasion was launched in June 1944, the pivotal battle at Stalingrad was long over, 16 months before that. The Wehrmacht was already being rolled back to German homeland. Some 90 per cent of all German military casualties – nearly six million soldier deaths – were to be inflicted on the Eastern Front fighting the Red Army.

The question remains: why did Western allies not launch their offensive on Nazi-occupied France much sooner? Soviet leader Josef Stalin had pleaded over the previous year with his American and British counterparts to do so on several occasions in order to relieve the Soviets. Did the Western allies finally act on D-Day because they could see that the Red Army was on the way to conquering all of Nazi Germany singlehandedly, and thus were motivated to claw some of the spoils? It was the Red Army that vanquished the Third Reich’s last stand in Berlin in May 1945. But the Soviet Union entered into a postwar carve-up of Germany with the US and Britain.

So, when President Trump talks about D-Day being the “greatest battle ever” he is being prone to unfounded exaggeration, relying on Hollywood fabulation than historical record.

There is little dispute that the opening of the Western Front did indeed help accelerate the final defeat of Nazi Germany. But it also indisputable that the greatest battles and decisive victories were achieved by the Soviet forces for the liberation of Europe from Nazi tyranny.

What we see in today’s celebration of the 75th anniversary of D-Day is more dramatics than actual historical reality. Official Western conceit pretends that that event was the key to defeating Nazi Germany.

Part of the reason is to arrogate a moral authority for Western states, which is hardly deserved. By claiming to have emancipated Europe from the scourge of totalitarian fascism, Western states are thereby given a political and moral cover to conduct their own otherwise blatant policies of aggression and militarism.

How many illegal wars and subterfuges have the US and its NATO allies, particularly Britain, carried out since the end of the Second World War? Some historians like the late William Blum, author of ‘Killing Hope’, or Mark Curtis, author of ‘Web of Deceit’, put the number in the hundreds. These genocidal, supreme crimes of aggression, are afforded an audacious moral license largely because these same aggressors continually invoke their supposed victory against Nazi Germany. The truth is that the US and its NATO allies have in many ways continued the same aggression of Nazi Germany in countless wars and covert operations around the world over the past seven decades. The genocides in Korea, Kenya, Malaya, Indonesia, Vietnam, Chile, Central America, Iraq, Afghanistan, Libya, are just a few among many other US-UK atrocities.

The present looming conflicts involve the US threatening war and destruction against Iran and Venezuela based on transparently spurious pretexts. And yet Trump has the brass neck to eulogize during the D-Day commemorations this week about American forces standing up for “freedom and liberty”.

The US and its NATO allies are using the past and its presumed glories as a shield for their own criminal imperialism.

Dramatizing D-Day as an event is also crucial for the discrediting and demonizing of Russia, as it was previously with regard to the Soviet Union. Wouldn’t it have been appropriate to invite Russian leader Vladimir Putin to the D-Day events this week in order to pay respect to the colossal sacrifices of the Soviet people in defeating Nazi Germany?

The US and its transatlantic allies are necessarily reviving the Cold War in a bid to cut Russia out of their global power ambitions. The Western propaganda war has involved every means to smear and criminalize Russia as a “malign actor” or a “rogue authoritarian regime”.

Contemporary Western vilification, typically on flimsy grounds lacking proof, has tried to isolate and undermine Moscow over allegations of Crimea annexation, invasion of Ukraine, shooting down a Malaysian airliner, supporting a “butcher-dictator” in Syria, the alleged assassination of journalists and lawyers as promulgated by the US Magnitsky Act, poisoning of double-agent Sergei Skripal and his daughter in an English park, doping of Olympic athletes, meddling in Western elections, subverting the European Union and NATO, and so on and on.

It is simply not feasible to push this maelstrom of propaganda narratives without also re-writing the history of the Second World War. The actual heroic role of the Soviet Union in decisively defeating Nazi fascism in Europe must, by necessity, be buried under the dramatized account of how Western allies purportedly “won the war”.

It is not just this year’s commemoration of D-Day that sees historical revisionism. That has been going on since the end of the Second World War when the British leader Winston Churchill and American counterpart Harry Truman coined the “special relationship” between Britain and the US, and then promptly launched the Cold War against their former wartime ally, the Soviet Union.

Stealing the laurels of victory was a necessary act of treachery by the Western powers in order to facilitate their dreadful Cold War against the Soviet Union. The same treachery continues today as Washington and its NATO allies try to wage a new and unjustifiable Cold War against Russia.