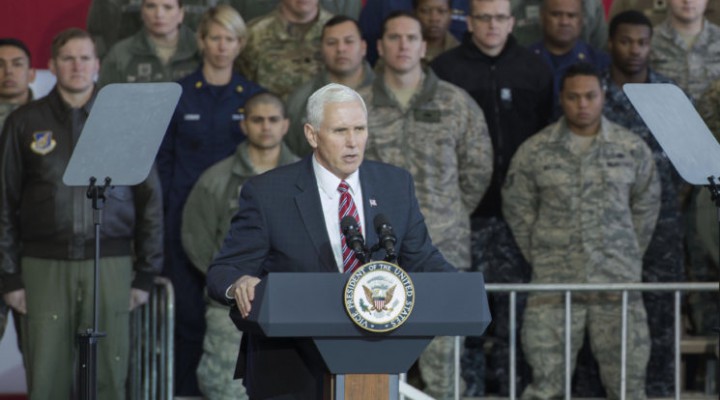 US soldiers are sent to wars to kill, die or be maimed for the sole purpose of making money for elite bankers, corporate executives or rich shareholders who send their non-serving scions to fancy private colleges like Pence and Trump went to.

In an address to West Point military graduates, US Vice President Mike Pence told them they will one day fight for America. “It’s a virtual certainty,” said Pence who was swelling with pride as he spoke, rather than lamenting.

Well, at least, he is being candid. The United States is a warmongering nation, there is no doubt about it. As several historical studies attest, out of the 243 years since its formation as a modern state, the US has been at war during every decade, sometimes in multiple simultaneous wars.

Or put another way, over nearly 95 per cent of its historical existence the US has been involved in waging wars, sometimes covertly or by proxy. Since the Second World War alone, the US has been involved in up to 60 wars or covert conflicts, inflicting a civilian death toll estimated at 20 million. Arguably, there is not another nation, past or present, with such a record of belligerence.

So, yes, Pence is correct when he told graduates from the US’ elite military academy: “It is a virtual certainty that you will be on a battlefield for America.”

Ironically, the vice president, like President Trump and the hawkish national security adviser John Bolton, has never served in the military. Yet Pence held forth like a four-star (armchair) general about the need for young American troops to do battle in a “dangerous world”.

“I know when that day comes you will move to the sound of guns,” exhorted Pence, whose only experience of gunfire no doubt comes from watching replays of old Hollywood war movies.

The whole world is a potential battlefield in Pence’s reckoning. (Not just Pence, but nearly all American politicians.) He specifically mentioned US troops going into future conflict with China or North Korea. He also said they may be deployed to Afghanistan and Iraq where US forces have been embroiled for nearly two decades.

Ominously, Pence warned the new cohort of West Point Second Lieutenants that they may one day be despatched to a war in “this hemisphere”. Given the Trump administration’s backing for a coup in Venezuela and its threats of military intervention, was Pence alluding to a possible war in the works with that South American country, which, by the way, happens to possess the biggest-known oil reserves on the planet?

The exulting in future wars by Pence comes at a time of escalating military threats from the US towards Iran. The Trump administration has sent an aircraft carrier strike group to the Persian Gulf as well as new missile batteries, nuclear-capable B-52 bombers and more squadrons of F-16 fighter jets. Trump also last week commanded 1,500 more troops to the region to join an already 70,000 stationed there, all in a bid to ostensibly “counter Iranian aggression”.

The global context of American military deployment, as Pence sanguinely acknowledges, belies the claims made by Washington of it allegedly facing “Iranian aggression”. What’s going on in the Persian Gulf is just one sequence in a whole global series of relentless US militarism. It is estimated that the US has 800 military bases around the planet with its forces deployed in at least 70 countries. The idea that this imperialist configuration is because the US is “the leader of the free world” is a risible propaganda rationale.

American military power is used to project and protect US capitalist interests. US troops are just hired guns and cannon fodder for corporate profit-making, as former Marine general Smedley Butler scathingly confessed during the 1930s in his classic book ‘War is a Racket’.

When Pence said: “It is a virtual certainty that you will be on a battlefield for America.” What he really meant to say was… “for American capitalism”.

US soldiers are sent to wars not to defend American national security or to “promote democracy”, as the myth goes. They are sent to foreign lands to kill, die or be maimed for the sole, sordid purpose of making money for elite bankers, corporate executives or rich shareholders who send their non-serving scions to fancy private colleges like Pence and Trump went to.

The American ruling class perpetuates itself by sending working-class schmucks into wars-for-capitalist-profit, over and over again.

The unremitting warmongering that underpins American capitalism is testified by Pence’s address to the West Point graduates. Stripped from the pious rhetoric, Pence was telling like it is: the American way is war, war, and more war. The American way is Total War on the planet to get whatever US corporations need in order to make the oligarchic class even richer.

Even when the US is purportedly engaged in “diplomacy” it is always ready to exercise the “all options” of militarism in order to get its infernal way.

Pence referred to US troops one day going to the Korean Peninsula because, he asserted, North Korea is “a threat to peace”. A country where the American military killed three million people during the 1950-53 Korean War. He warned there could be another war against North Korea or China. Partly because China, he said, was “challenging American power”. That’s acceptable cause for war?

It is quite astounding that the American vice president is envisioning a war with two countries that his administration is supposedly engaging with in ongoing diplomatic negotiations. The Trump administration is trying to convince North Korea to give up its nuclear weapons, while also pursuing major economic concessions from China in trade relations.

Evidently, however, the White House views the ultimate decider to be military force in its relations with these two countries.

Pence’s reprehensible disclosure of militarist designs towards North Korea and China is bound to undermine diplomacy, if not torpedo it altogether. How are Pyongyang or Beijing expected to engage with a US administration that ultimately views war as an option in order to get its way if negotiations fall short of US demands?

Why would Iran, for example, take up Trump’s latest offer this week of talks, when evidently the American way is to always hold a gun under the table?

What are the chances of Russia negotiating sustainable future arms control treaties with the US, when history has shown Washington to have ripped up previous treaties? The two Cold War nuclear control pillars, the ABM and INF treaties, were trashed in 2002 and last year unilaterally by the US so as to give itself a license to point nuclear missiles in Moscow’s face – all to gratify its obsession with global “full-spectrum dominance”?

Let’s finish with this thought experiment. Would normal law-abiding, moral people have tolerated a speech by Josef Goebbels to Wehrmacht graduates, telling them it was “certain” that one day they would go to war for the good of Nazi Germany? To be sure, Goebbels would have made the conduct of aggression and war crimes sound like a virtuous, noble cause for some higher principle. But surely people would have seen through the charade and propaganda, and disdained the Nazi ideologue as a cynical criminal.

How is it then possible for US Vice President Mike Pence to get away with making warmongering all over the planet sound like a virtue? Why are those supposed American virtues somehow perceived as genuine and believable? And, all the while, the Western corporate news media are obediently silent, bereft of any critical questioning. What does that say about the extent of brainwashing in today’s world?