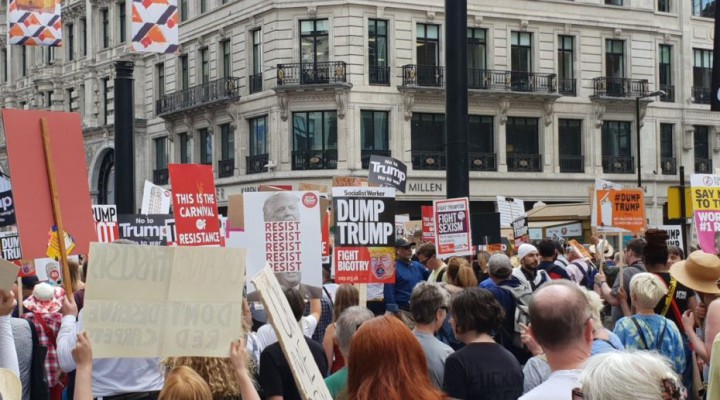 The polarization in American politics has become so extreme there seems no longer to be any center ground. The political establishment is consequently imploding into an abyss of its own making.

The polarization in American politics has become so extreme there seems no longer to be any center ground. The political establishment is consequently imploding into an abyss of its own making.

President Trump is being driven into an impeachment process by Democrats and their media supporters who accuse him of being “unpatriotic” and a danger to national security.

Trump and Republicans hit back at Democrats and the “deep state” whom they condemn for conspiring to overthrow the presidency in a coup dressed up as “impeachment”.

The White House is being subpoenaed, the Democrat-controlled House of Representatives wants to access transcripts to all of Trump’s phone calls to foreign leaders; Secretary of State Mike Pompeo has blasted congressmen for “harassing the State Department” in their search of evidence to indict Trump. Trump calls the impeachment bid a “witch-hunt”.

Republican Representatives protest that the US is facing a dark day of constitutional crisis, whereby opposing Democratic party leaders are abusing their office by accusing Trump of “high crimes” without ever presenting evidence.

It’s an Alice in Wonderland scenario writ large, where the gravest verdict is being cast before evidence is presented, never mind proven; the president is guilty until proven innocent.

Trump, in his turn, has berated senior Democrat Adam Schiff, the chair of the House Intelligence Committee, for “treason” – a capital offense. Are federal police obliged to arrest him? Schiff is accused of colluding with a supposed CIA whistleblower in concocting the complaint that Trump tried to extort Ukrainian President Volodymyr Zelensky to dig dirt on Democratic presidential candidate Joe Biden.

There seems no end to this political civil war in the US. The American political class is literally tearing itself apart, destroying its ability to govern with any normal function.

So-called liberal media outlets, in lockstep with the Democrats, inculpate Trump for wrongdoing, while they staunchly assert that credible reports of Joe Biden abusing his former vice presidential office to enrich his son over Ukraine gas business are false. Many Americans don’t see it that way. They see Biden as being up to his neck in past corruption; they also see a flagrant double-standard of the establishment protecting Biden from investigation while hounding Trump at every possible opportunity, even when evidence against Trump is scant.

What Trump is being subjected to is the same “highly probable” paranoia that Russia has been subjected to by Washington over recent years. Guilt is asserted without evidence. It becomes a “fact” by endless repetition of baseless claims, such as Russia allegedly interfering in US elections, or allegedly destabilizing Ukraine. Hundreds of economic sanctions have been imposed on Moscow as a result of this blame game, a game that, ironically, Trump has also indulged.

Ironically, Trump and the very highest political office of president is getting the same phobic treatment. No matter that the two-year Mueller Report into alleged Trump-Russia collusion collapsed in a pile of dust for lack of evidence, the Democrats and their media, as well as their deep state patrons, have persisted to accuse the president of enlisting a foreign power, Ukraine, to boost his electoral chances.

The transcript of Trump’s phone call with Ukraine’s Zelensky back in July shows he did not make a quid pro quo demand linking US military aid to a requested investigation into alleged corruption by former Vice President Joe Biden. Nevertheless, Democrats and their political establishment allies are relentless in pursuing the impeachment of Trump. Based on such flimsy reasoning, this impeachment process looks like a euphemism for “coup” – to overturn the result of the 2016 presidential election. The so-called “Russiagate” debacle failed for lack of evidence; now it is “Ukrainegate” that is the pretext for pushing the coup attempt.

Under freedom of information release, Judicial Watch in the past week has uncovered categorical proof that the Mueller probe was a coup attempt to oust Trump. Unsealed communications between the Department of Justice, FBI and liberal media outlets show a clear motive and deliberate orchestration to topple Trump based on no evidence of wrongdoing.

America’s democracy and constitution is being trashed by unelected shadowy forces, aided and abetted by prestigious media outlets like the New York Times. These forces presume to know better or have more privilege than their fellow Americans who “voted the wrong way”.

The inescapable conclusion is that powerful political forces within the US simply do not recognize the democratic rights of the electorate who voted Trump into office. Not only do these forces not respect democratic principle, they also, patently, do not respect due legal process or the high offices of their own government. This is a lurking ideology of dictatorship and fascism. Paradoxically, these labels are pinned on the maverick Trump. More accurately, they apply to the politicians and media who claim to be “liberal” and “democrats”.

The accelerating political implosion in the US nails the lie to oft-repeated American proclamations about their nation being the paragon of “sacred” democratic virtue and rule of law. And the people who are doing the damage to US politics and its constitution are “patriotic” Americans, not Russia or any other imagined foreign adversary.

Is that not poetic justice after all the decades of calumny, deception and self-declared “exceptional” American vanity.

America is at war with itself. It is Americans themselves who destroying their own political system, and perhaps even the very society, with their own hands and their addled, paranoid brains – without any assistance from a “foreign enemy”.