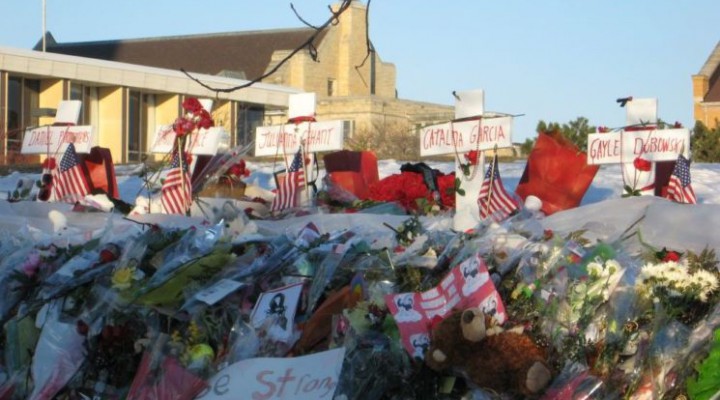 America’s horrendous gun violence can be attributed to many factors, but there is one factor that is hardly talked about or explored in public discourse – the apparent link between mass shootings and the rampant culture of US militarism.

America’s horrendous gun violence can be attributed to many factors, but there is one factor that is hardly talked about or explored in public discourse – the apparent link between mass shootings and the rampant culture of US militarism.

Mass shootings in the US – involving four or more persons – occur on an almost daily basis. The most recent major atrocity was in Virginia Beach last month in which 12 people were killed. The shooter was reportedly a military veteran.

Turns out that US military veterans are disproportionately responsible for violent gun deaths among American civilians. Investigative journalist David Swanson has recently found that some 35 per cent of mass shootings in the US have involved an ex-serviceman. Swanson studied a database sample of 97 recent deadly incidents, and found that, from publicly available information, more than a third of the perpetrators were listed at some time in the past as having served in the military. The journalist cautions that the actual proportion could be much higher due to lack of publicly available information on the other shooters.

Swanson emphasizes an obvious point that the vast majority of US military veterans are not mass shooters. Nevertheless, the factor of having served in the armed forces and the frequency of mass shootings does appear to be a highly significant correlation. What’s more, he says that it is strangely conspicuous how US corporate news media have not delved into what seems to be an urgent issue concerning gun violence in American society.

The reluctance by news media and politicians to acknowledge such a factor is no doubt because it would open up a Pandora’s Box of self-indictment. It raises painful questions about a host of issues that Americans take for granted as normal: the militarization of US culture and society, where young children are compelled to salute the stars and stripes and sing paeans to American “greatness”; the obscene expenditure of over $700 billion a year on military instead of on public services and social development; the near-permanent deployment of US military forces all around the world in countless illegal wars; the blasé indifference to war crimes committed by US servicemen, whereby even President Donald Trump wants to grant amnesty to killers in uniforms.

On the latter issue, it should be deplored, but isn’t, how a congressman and former veteran recently went on a mainstream news channel and appeared to brush off mass killings and other war crimes committed by US forces as being a routine occurrence, and therefore in his view no big deal. His chillingly nonchalant views were aired with barely a murmur of public reaction, never mind condemnation.

America’s criminal overseas military rampaging over several decades is bound to take a grim toll on society at home. Veterans return home traumatized in body and mind from the horror of mass violence they have participated in or witnessed. The American public pay the price from ballooning budgets for veterans’ medical care. They also pay a price from broken families and myriad pathological problems, ranging from drug abuse to suicides. It is reckoned that more US veterans have lost their lives by suicide than were killed in action during the wars in Iraq and Afghanistan. American ex-military personnel turning guns on themselves. Why is that?

Put starkly, it cannot be expected that US military forces inflict millions of casualties in foreign countries and for that slaughter not to be manifest at home in some pathological way or another.

Millions of young Americans, mostly from poor, deprived backgrounds, are trained to use lethal weaponry funded by billions of dollars at public expense. After they are sent to shoot up foreign countries while loaded up on paranoid propaganda that often dehumanizes, these professional killers are then unceremoniously dumped back in their home country, often without jobs or a future, and often with haunting memories of crimes conducted in the service of “American greatness” – whose “greatness” does not extend to treating them as human beings.

This brutalizing subject needs a lot more research. What is the definitive number of US military veterans involved in American society mass shootings? Swanson, the journalist, seems to have tapped a very significant causal factor. But a bigger database of mass shooting incidents should be studied and the military history of all the shooters disclosed. As Swanson surmises, the proportion of ex-servicemen involved in mass killings is likely to be a lot more than 35 per cent.

It should also be studied how many of the veterans involved in mass shootings were deployed overseas.

Another interesting aspect is to track the incidents of gun violence in the US as a function of time, decade by decade, over the past century. We might expect that as the number of illegal American wars have multiplied in the past two decades, so too have the number of violent gun deaths at home.

Last week, US President Trump and other Western leaders paid tribute to the sacrifices of American veterans during the Second World War. That war is commonly thought of as a “good war”, meaning that the soldiers went into battle motivated by a noble conviction to defeat Nazi tyranny.

In the seven decades after WWII, American forces have been deployed in dozens of wars overseas, from Korea (1950-53) to presently in Afghanistan, Iraq, Syria among several other countries. Arguably, not one of those American wars since WWII was, or is, justified by any genuine noble cause, despite official Washington and US media propaganda claims. They were all waged by American rulers with imperialistic calculations for strategic objectives benefiting elite interests. In short, criminal wars systematically perpetrated and repeated non-stop with impunity, without ever there being a critical accounting or prosecution.

However, inevitably if there is such a thing as natural justice, the crimes that American rulers commit through illegal wars are eventually repatriated back to American society. The foreign bodies mutilated in foreign lands by US military eventually appear in the form of blood-splattered American civilians.

That’s an excruciating heavy price which American citizens are not even permitted to learn or talk about by their corporate media. The acceptability of horrific violence abroad is supposed to be acceptable at home, according to the comfortably numb US mass media.

Indeed, it can be deduced, the dutiful, apathetic US corporate-controlled media are part of the mass-killing machine that is American imperial power. Cue “Russia-gate”, celebrity gossip, political trivia, sports and weather news. Anything but the appalling, bloody reality of American state terrorism.