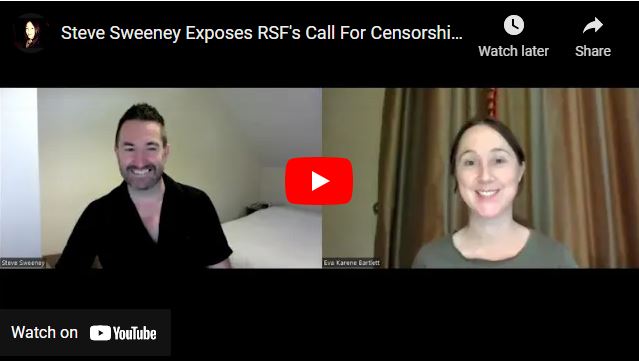 Steve Sweeney has reported from hot spots around the world, exposing Imperialist war crimes and attempts to interfere in and destabilize sovereign nations.

Steve contacted me the other day to ask for a statement on Reporters Without Borders’ (RSF) recent appeal to censor Russian media, on their premise that Russian media is “inciting hatred” and “condoning war crimes.”

He also contacted RSF with an excellent list of questions including why a (supposed) press freedom group is demanding that alternative media narratives are censored, could they give concrete examples regarding what they’ve accused Russian media of doing (no), and whether RSF would comment on journalists like me being put on Ukraine’s kill list because of my reporting from on the ground in Donbass, where I’ve just returned incidentally.

After a series of insightful exchanges, I asked Steve to please have a conversation with me about all of this. What a conversation it was! In our conversation, he details how RSF panicked and stalled replying, only to essentially give lengthy non-answers and flat out refuse to address some questions (including the one about me and Ukraine’s kill list).

A spoiler: Steve notes that RSF is not the neutral body it pretends to be, instead receiving obscene amounts of money from NED, Soros’ Open Society, USAID, the Ford Foundation…a “rogue’s gallery of the worst kind of regime change organizations.”

As RSF endeavours to shut down Russian media, I joined my Russian colleagues today in going to sites that were bombed by Ukraine yesterday in Gorlovka, killing one civilian & leaving two others in critical condition. This is the sort of crimes Ukraine has been perpetrating for over eight years, and its courageous journalists like my colleagues who have been putting their lives on the line to expose Ukraine’s genocide of the Donbass people. RSF by whitewashing Ukraine’s crimes is abetting in genocide.