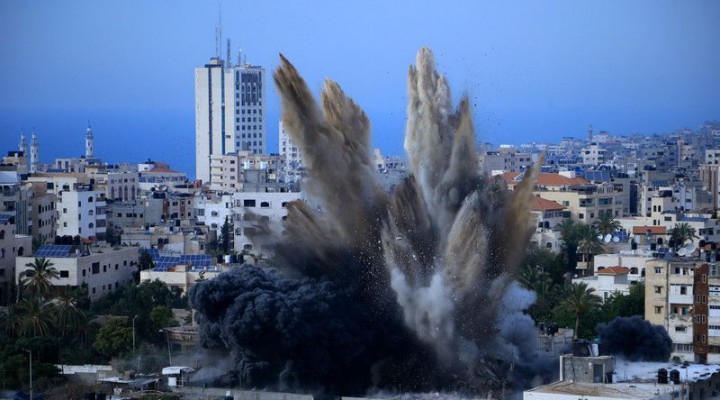 On Friday Israel began a two-day attack on Gaza which as of this writing has left a total of 27 Palestinians dead, including a pregnant woman and a baby.

Moon of Alabama documents how the mass media have been consistently depicting this attack as a “response” to a Hamas rocket attack, suggesting that Hamas were the initial aggressors and Israel merely responded in self-defense, yet Hamas is very open about the fact that the rocket attack was done in retaliation for two Palestinian civilians who were killed by Israeli snipers. MoA cites an excerpt from a 2011 Louis Allday blog on Israel’s extensive history of painting all of its aggressions as acts of self-defense:

If one consults only mainstream media for information on the conflict in Palestine, what is immediately striking is that Israel appears to be in a permanent state of “retaliation” — a phrase which immediately confers at least a modicum of legitimacy or justification upon the act to which it refers. Israel is never presented as the aggressor and however much its actions are condemned — which they are by some mainstream sources — they are invariably portrayed as a reaction to some form of provocation. Conversely, missiles launched from the Gaza Strip or southern Lebanon are habitually portrayed as “attacks” — never “retaliations,” even if Israel has launched a devastating missile strike immediately prior to the event — as so often is the case.

The public is subliminally conditioned to understand that Israel is a permanent victim that on occasion is forced to lash out in response to the ostensibly irrational and unruly aggression of illegitimate non-state actors that encircle it. 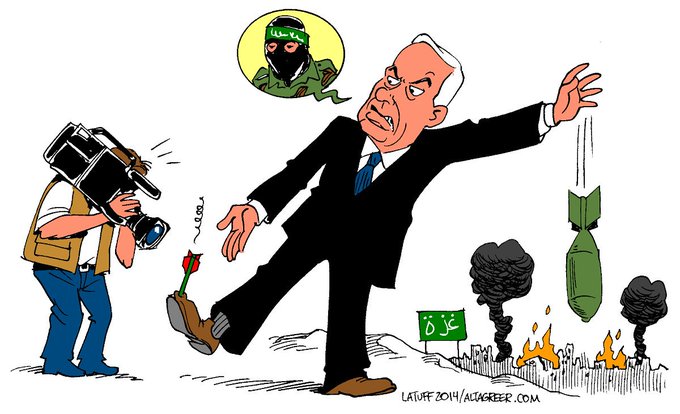 New on MoA:
Israel Again Bombs Gaza – But Is It “In Response”?https://www.moonofalabama.org/2019/05/israel-again-bombs-gaza-but-is-it-in-response.html …

This victim-LARPing is done by Israel, with the full support of the propaganda machine for the transnational power alliance of which Israel is a part, because people intuitively understand that in a conflict with a severe power discrepancy, the more powerful party is generally at fault. If you saw someone who is five feet tall and a hundred pounds being accosted by five people who are all over six feet tall and two hundred pounds, your immediate impulse, if you are psychologically healthy, would be to try and find some way to protect the small person. Not because you believe the small person is necessarily nice and wonderful, but because it’s the powerful group who will have control over the outcome of the violence. Because of the power discrepancy, they will be able to decide when the violence begins, when it ends, and how bad it gets for the weaker party. They control if, when and how the fight happens, and they are therefore responsible for it.

Israel and its defenders use all kinds of narrative management tactics to try and shift this responsibility off Israel’s shoulders. Beyond depicting Israel as being in a perpetual state of “responding”, it’s also very common to depict it as surrounded and outnumbered by many hostile Middle Eastern nations, and to evoke memories of the Holocaust and the persecution of Jewish people. If the propaganda machine can paint Israel as a protective bulwark for a persecuted religious minority fending off unprovoked attacks by larger more powerful foes, the responsibility for the nonstop violence upon which Israel is built can be seen in the eyes of the public as resting elsewhere.

This of course is absurd. Israel is an extremely powerful nuclear-armed nation with the full backing of the entire western power alliance, functioning more like an ongoing military outpost in a key geostrategic location than a proper nation. You look at Israel and you’re looking at the full might of the entire US-centralized empire, which has far more military and economic might than any force in the history of civilization. That immensely powerful force uses its might to do things like murder unarmed demonstrators with snipers, then paints itself as the weak, disempowered victim. There’s no real reason for Israel to exist in the way it exists apart from the ability of powerful people to murder anyone who tries to prevent it from doing so, but careful narrative management is used to legitimize the nonstop down-punching violence upon which that existence depends.

And this distortion is in no way limited to Israel. I’ve had people online sincerely try to argue with me that Julian Assange is a powerful individual whose imprisonment and extradition is perfectly warranted because powerful people need to be held to account. They think this way because for nearly three years the mass media have been painting Assange as a big bully allied with powerful government forces who reached out his mighty arm and slapped the presidency from the hands of the anointed Queen Hillary, instead of a gangly computer geek with a few revolutionary ideas who has been imprisoned by the full might of the empire. The propaganda campaign on this has been so successful that you see mainstream liberals cheering enthusiastically at his persecution as though taking on the CIA and the Pentagon was like taking candy from a baby.

That time the Pentagon and CIA were being bullied by a big strong Australian computer geek but they stood up to their oppressor and everyone cheered.

208 people are talking about this

You see the same deliberate distortions with targets for empire-backed regime change. Narratives are peddled about Maduro using his power to harm the Venezuelan people, conveniently sweeping under the rug the fact that the opposition in Venezuela are backed by the full might of the US-centralized empire. In Syria it’s the same: Assad the powerful tyrant has been slaughtering the plucky freedom fighters who dared to stand against him, conveniently sweeping under the rug the fact that those “freedom fighters” were actively funded and armed by the western empire. Small nations fighting desperately to retain their sovereignty and avoid being absorbed into the blob of empire are depicted as powerful bullies, when the forces they are fighting against are vastly more powerful than they are.

You see the same distortions in the way Vladimir Putin is treated as an omnipotent supervillain who is responsible for all major world events, instead of the head of a nation with an economy the size of Spain. You saw the same distortions in the wake of 9/11 when the US used its newfound victim status to implement unprecedented levels of military expansionism and surveillance.

You see the same dynamic domestically in cases of police brutality. A cop who has every power advantage over a citizen will routinely be painted as the victim for shooting an unarmed citizen because the citizen reached for their wallet in a slightly alarming way or they weren’t perfectly respectful in their word choices or they raised an eyebrow wrong or whatever. Cops don’t just often have physical superiority and numbers on their side, they are also armed, they have their badge, they have access to further back up and they are trained. Careful narrative management has ensured that many of the public don’t see it that way and even when presented with the most damning video evidence they will still side with the cop.

If we’re going to create a healthy world, we’re going to have to become more conscious of power dynamics and how they can be manipulated by narrative to appear reversed. If people get a clearer understanding of how these manipulations are rolled out, it won’t work anymore and the spell will be broken on a vast array of issues. There will be a rapid collapse of oligarchic power, because this is the one trick that most propaganda is based upon. For that reason alone, it’s worth calling attention to it every chance you get.