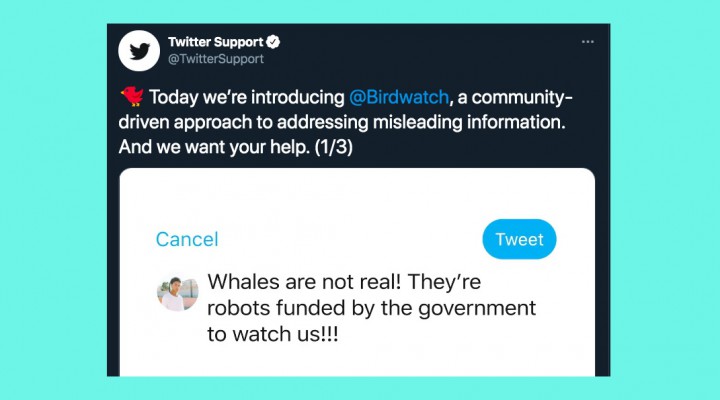 Twitter has announced that it will be employing “a new community-driven approach to help address misleading information” called Birdwatch which news media are comparing to the model of content moderation used by Wikipedia.

“Twitter unveiled a feature Monday meant to bolster its efforts to combat misinformation and disinformation by tapping users in a fashion similar to Wikipedia to flag potentially misleading tweets,” reports NBC. “The new system allows users to discuss and provide context to tweets they believe are misleading or false. The project, titled Birdwatch, is a standalone section of Twitter that will at first only be available to a small set of users, largely on a first-come, first-served basis.”

“We know there are a number of challenges toward building a community-driven system like this — from making it resistant to manipulation attempts to ensuring it isn’t dominated by a simple majority or biased based on its distribution of contributors,” Twitter’s official statement says. “We’ll be focused on these things throughout the pilot.”

Such claims provide little reassurance for anyone who’s familiar with the establishment narrative control operations which take place on Wikipedia in exactly that way. The Grayzone‘s Ben Norton did a great two-part report last year on the way concerted, aggressive efforts by a small group of shady-looking Wikipedia editors has succeeded in dominating the site’s articles which relate to western imperialist agendas and the reporters who support and oppose those agendas, including getting outlets like WikiLeaks and The Grayzone banned from use as sources despite their having no history of false reports.

“The internet encyclopedia has become a deeply undemocratic platform, dominated by Western state-backed actors and corporate public relations flacks, easily manipulated by powerful forces,” wrote Norton. “And it is run by figures who often represent these same elite interests, or align with their regime-change politics.”

Wikipedia is a scam. It's a propaganda vehicle for intelligence agencies, govts, corporations, and PR flacks

This extremely shady "user" Philip Cross edits all day every day, 7 am to 11 pm, posting nonstop pro-war propaganda — including almost every edit on @MaxBlumenthal's page pic.twitter.com/9ZOof5GxwC

Since 2018 alternative media voices like The Canary and Media Lens have been reporting on the frenetic editing behavior of a Wikipedia account by the name of “Philip Cross” which works an inhuman number of hours without ever taking a day off, largely targeting the accounts of those who criticize the western empire and voice skepticism of its dominant narratives.

This kind of aggressive narrative management campaign is why when you look at any Wikipedia article about an internationally disputed issue on the world stage, say for example the article about the alleged chemical weapons attack in Douma, Syria, you’ll see the word “Bellingcat” no fewer than 20 times as of this writing and a heavy bias toward the western narrative that the Syrian government was responsible for the attack, but won’t find information about the gaping plot holes in the story like the ones documented in this excellent article by The Nation‘s Aaron Maté, nor will you see any links back to this article.

So it’s already established that this sort of “community-driven approach” to information control can easily be exploited by well-funded groups which have a vested interest in doing so. The fact that Twitter has already been functioning as a propaganda arm of the US government with regard to its willingness to deplatform accounts from imperialism-targeted nations like Iran, Venezuela, Russia and China means we can only expect this bias to go one way with regard to imperialist narrative management.

The fact that this “Birdwatch” program will most likely be used to determine the dominant narrative on disputed events like potential false flags and what’s happening in nations like China and Syria means it’s obnoxious that Twitter’s post promoting it features an imaginary account saying “Whales are not real! They’re robots funded by the government to watch us!!” As though that sort of indisputable falsehood is the sort of post this program will actually be targeting rather than people expressing doubts about things like Russian hackers and the White Helmets.

Twitter chose to use “whales aren’t real” as its example of the “misinformation” its new program will be “fighting” not because it is cute and funny, but because using any of the actual narratives it will wind up manipulating would have set off people’s alarm bells. Imagine the reaction if they’d chosen something like Covid vaccinations for example, even though this could very well end up being one of the issues Birdwatch winds up exercising narrative control over.

Whoever controls the narrative controls the world. That’s all you’re ever seeing in all the efforts to manage information via censorship, algorithm changes, “fact” checking, Russian propaganda panic, etc. Humans are story-driven animals, so if you control the stories you control the humans.

The US-centralized oligarchic empire will be doing a lot of evil things in the near future, and it will be necessary to control the narrative about those things. That’s all we’re really looking at here.