The Empire Is Showing More And More Of Its True Face 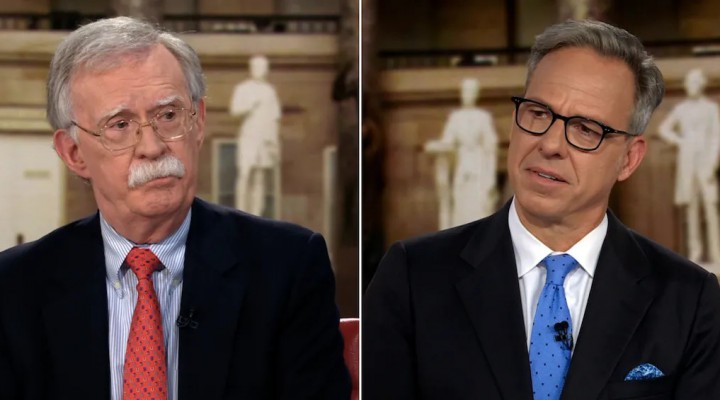 While arguing that the Capitol riot on January 6th of last year was not an attempted coup but rather just Trump stumbling around trying to look after his own interests, Bolton hastened to pull authority on the matter when Tapper suggested that he might not be correct about how coups work.

“I disagree with that,” Bolton said. “As somebody who has helped plan coups d’etat — not here, but, you know, other places — it takes a lot of work, and that’s not what [Trump] did.”

Tapper just let Bolton’s remark slide like he didn’t just admit to something extraordinarily fiendish, but did eventually follow up with a request that the former National Security Advisor elaborate.

“I do want to ask a follow up,” Tapper said. “When we were talking about what is capable, or what you need to do to be able to plan a coup, and you cited your expertise having planned coups.”

“I’m not going to get into the specifics,” replied Bolton with a chuckle.

“Well, I wrote about Venezuela in the book,” Bolton answered. “And it turned out not to be successful – not that we had all that much to do with it, but I saw what it took for an opposition to try and overturn an illegally elected president, and they failed. The notion that Donald Trump was half as competent as the Venezuelan opposition is laughable.”

“I feel like there’s other stuff you’re not telling me, though,” Tapper responded.

“I’m sure there is,” Bolton said, grinning like he just finished boiling a puppy.

Tapper pursued the matter no further, because he is a propagandist first and a journalist second, and he would be acutely aware that Bolton was saying things that you are not supposed to admit to on television.

Bolton’s sole admission to coup plotting runs counter to his comments about the US government’s failed attempt to oust President Nicolas Maduro while he was facilitating that bizarre operation under the Trump administration, telling reporters in 2019 that the empire’s Venezuela shenanigans were “clearly not a coup.”

In other examples of the US empire just rearing its ugly head right out in broad daylight, an excellent new report by Alan MacLeod with Mintpress News shows that Facebook/Instagram parent company Meta has been hiring dozens of people who previously worked in the US intelligence cartel to help regulate what content gets seen on the social media giant’s platforms. Some were hired from straight out of the CIA or had (officially) left the agency very recently.

The CIA used to infiltrate the media. Now the CIA is the media. This trend of openly hiring US intelligence veterans to help teach the public what thoughts to think about the world began a few years ago in the legacy media, and now we’re seeing it in the new media as well.

This is part of a broader trend in which many of the ugly things the US empire used to do in secret it now does openly with the aid of propaganda spin. In addition to attempting coups right out in the open as we saw in Venezuela and just giving intelligence insiders positions of influence within both new and old media institutions, you’ve got things like the US government-funded National Endowment for Democracy (NED), which according to its own founding officials was set up to do overtly what the CIA used to do covertly.

We see NED’s fingerprints all over pretty much any situation where the western power alliance needs to manage public perception about a CIA-targeted government, from Ukraine to Russia to Hong Kong to Xinjiang, to the imperial propaganda firm known as Bellingcat. Rather than manipulate world narratives and foment discontent from behind the veil of hidden identities and cutouts as in CIA tactics of old, NED just manipulates them openly by pouring funds into narrative management operations which benefit the empire while framing it as promoting democracy and human rights.

To further #humanrights & human dignity for all people in China, the National Endowment for Democracy has funded Uyghur groups since 2004. #NEDemocracy #HumanRightsDay https://t.co/C0LJEyWxq1 pic.twitter.com/OqZdehdxXN

What the empire has found is that you don’t need to hide as much from public visibility as long as you can manipulate what people think they’re seeing. If the public is sufficiently propagandized and consent has been adequately manufactured, you can get away with just proclaiming some random guy the president of a foreign country and seeing if you can manipulate the rest of the world into playing along with you.

If your narrative control is strong enough, you can even keep the empire running smoothly when information gets out into the open that you’d rather stay hidden. Very often these days major stories about imperial malfeasance will come out that simply have no impact, either because the mainstream news media unite to ignore them or because they spin those revelations as coming from someone bad or not containing important information.

When I was in an abusive relationship, the more ground down and submitted I became the more my abuser would flaunt his abusiveness in the plain light of day. Toward the end he was just outright admitting he was a sociopath and a manipulator and openly telling me he was going to do monstrous things to me before he did them, because he was that confident that he had me wrapped around his finger.

Luckily, he was wrong. And hopefully the empire is wrong as it makes this same calculation with all of us.

Bolton’s words confirm US war crimes, interference in internal affairs of other countries