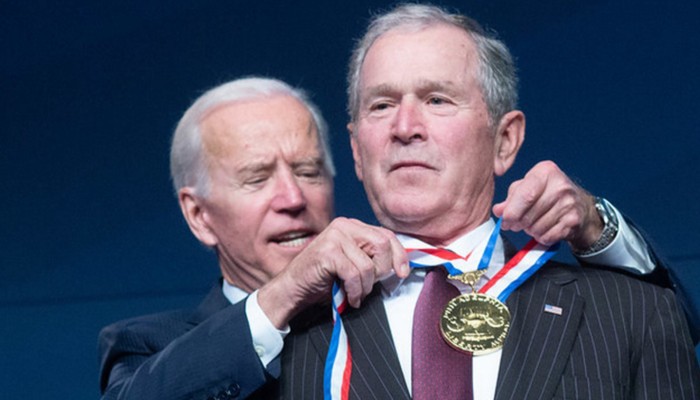 Well you’ll be shocked to learn that, while the Ukraine invasion we’ve been told for weeks was happening any day now still has not occurred, the US and UK have declared that Russia attacked Ukraine in an invisible and unverifiable way for which the evidence is secret.

“The White House blamed Russia on Friday for this week’s cyberattacks targeting Ukraine’s defense ministry and major banks and warned of the potential for more significant disruptions in the days ahead,” AP reports. “Anne Neuberger, the Biden administration’s deputy national security adviser for cyber and emerging technologies, said the U.S. had rapidly linked Tuesday’s attacks to Russian military intelligence officers.”

No evidence for this claim has been provided beyond the assertive tone with which American and British officials have uttered it, but that likely won’t stop arguments from western narrative managers that this “attack” justifies immediate economic sanctions.

President Joe Biden says Russia President Putin is going to invade Ukraine. Reporter asks, "What reason do you have to believe he's considering that option at all?" Biden replies, "We have significant intelligence capability." Again, no evidence. Just trust us. pic.twitter.com/C9wwFE8w4p

You’ve probably also heard by now that President Biden announced at a press briefing that Vladimir Putin has made the decision to invade Ukraine and violently topple Kyiv “in the coming days,” citing only “intelligence”.

“What reason do you believe he’s considering that option at all?” a reporter asked Biden after his speech.

“We have a significant intelligence capability, thank you very much,” the president answered, and made his exit.

As we were reminded earlier this month in an interesting exchange between State Department spinmeister Ned Price and AP’s Matt Lee, US officials firmly believe that simply placing assertions next to the word “intelligence” should be considered rock solid proof that those assertions are true, and the press are expected to play along with this.

And indeed, a large percentage of the political/media class is responding to Biden’s unevidenced claim that Putin has decided to launch a full-scale ground invasion of Ukraine as though that invasion is actually happening.

It is beyond belief that in 2022, as we face challenges like covid & climate change, any national leader would start a war that could kill thousands & create millions of refugees. There is a diplomatic solution to this crisis. It is tragic that Putin seems intent to reject it.

1. US has intelligence that Putin has made the decision to further invade Ukraine.

Europe—the world—won’t be the same if Biden is right.

It is not even a tiny bit rare for US presidents to make incendiary claims about governments they don't like without solid intel. https://t.co/5wp4CBrlvX

There are also accusations of false flags amid the fighting in eastern Ukraine and numerous other claims about what Russia is doing as it prepares for this invasion it’s supposed to launch, and it’s all just being blindly accepted as objectively true in mainstream political discourse. Nowhere is it questioned. Nowhere is the fault of the US and NATO in creating these tensions between Russia and Ukraine ever reported, nor are the geostrategic benefits the US hegemon stands to reap from this standoff. Few even bother trying to articulate what Moscow would gain from invading Ukraine, except the occasional infantile “they hate us for our freedom”-style think piece about how Putin just can’t stand democracy.

If online you question the veracity of any of these claims in light of the extensive history these institutions have of lying to us about just this sort of thing, it’s treated as a freakish and bizarre interjection that is at best misguided and at worst proof that you’re an agent of the Kremlin. I haven’t received so many notifications from people calling me a Russian operative since 2018, which to me is funny because everything I was saying about western Russia narratives in 2018 has since been completely vindicated.

And I think it’s important while this all unfolds to take a moment to remind ourselves that the burden of proof is always on the party making the claim. This is a basic principle we all hold true in matters of logic and debate and in the legal system, and really anywhere that disputed claims are scrutinized, and it doesn’t magically stop being the case just because a claim is spoken in an assertive tone by powerful people about a country they don’t like. If you make a claim in an irrelevant time-wasting Twitter argument you’ll immediately be asked for proof that it’s true, but if the most powerful government in the world makes an incendiary claim of potentially world-shaping consequence we’re all just expected to accept it, even though that government has a proven track record of making false claims.

Amazing interview with of the former MI6 chief with the Atlantic Council's @B_judah (the whole gang present) where the intel goon *admits* that many western "intel leaks" media outlets are dutifully conveying aren't real leaks but propaganda messages designed to undercut Putin. pic.twitter.com/UOzBxG5F5H

The onus is not on anyone else to prove that the US and UK governments are lying when they make these claims, the onus is on the US and UK governments to prove that they are telling the truth. At some point after Donald Trump’s election it became a mainstream liberal doctrine that you can say whatever you want about Russia no matter how outrageous and suffer no professional consequences if it proved completely false, and nobody’s really been pushing back on that. So many people built entire careers out of suggesting for years on end that the entire Trump family was going to be dragged out of the White House in chains for Kremlin collusion, and when this failed to prove true everyone just acted like it was fine and continued on with their careers.

I don’t know what’s going to happen with Ukraine. What I do know is that it would be good to drag the Overton window of acceptable debate kicking and screaming back to the point where the burden of proof needs to be met even, and especially, by the world’s most powerful people. And where, if that burden is not met, their claims are treated with all the disdain they deserve.

German Parliamentarian: ‘Peace Can Only Exist with Russia, Not Against Russia’

Negotiations Have Got Russia Nowhere

US Trying to Fix Internal Divisions With Russia Confrontation

The U.S. Needs Cold War but the Real Enemy Is Within

Ukraine Tensions Driven by US Aggression